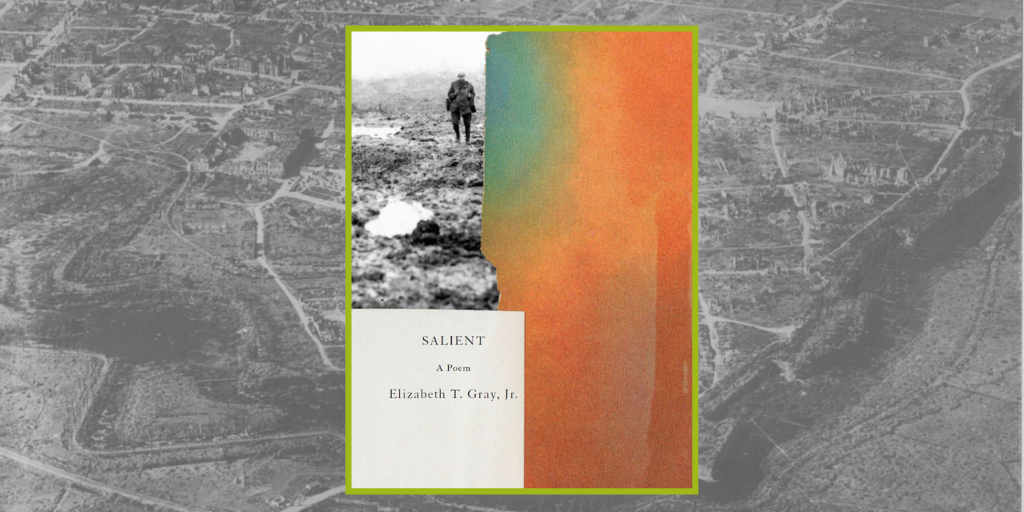 Salient by Elizabeth T. Gray, Jr. is a book-length poem that combines reflections on the Battle of Passchendaele with the Tibetan Buddhist practice of Chöd, which at its basic level involves meditations in frightening places.

Salient by Elizabeth T. Gray, Jr. is an extraordinary book that’s easy to love yet difficult to describe. Calling Salient “a book of poetry” fails miserably to convey its emotional depth and punch. Adding the descriptor “original” is essential, but still needs the addition of adverbs like uniquely, wonderfully, amazingly… but then I could be accused of gushing. “An exploration of a battlefield” comes closer, but neglects to express just how delightfully the author is able to explore and document the fields of Ypres: through maps, military accounts, relics, sightings, feelings … of spirits, the dead, the missing. So what about “an epic?” Now we’re getting somewhere. There’s certainly something Homerian in Salient. A modern-day Iliad perhaps. Maybe I should stop trying to describe it and just let you read what the publisher says …

from the back cover

“The Third Battle of Ypres, often referred to as Passchendaele, took place from the end of July to November in 1917. It served as the high-water mark and poster child for the horrors of trench warfare. Over several decades, Elizabeth T. Gray, Jr., has traced the contours and history of the Ypres Salient, diving deep into the British military archives and walking the haunted battlefield with survey maps in hand. Out of this physical and textual material, through a process of collage and an unexpectedly powerful convergence with a twelfth-century Tibetan visualization ritual, Gray has composed a spare, fascinating, lyrical exploration of what she calls “The Missing,” in shell-hole and curved trench, by way of magical amulets and the passage through obstacles. What is salient rises from the secret signs in poetry, like a blessing, protected from harm.”

The language. Listen to Ms Gray reading a portion of the book herself. Enjoy the play on words. The troops will “advance as light as possible and thus will not carry shovels”, yet if they “advance as light they will not need to advance as something else, as men or fodder…” Revel in the poet’s command of vocabulary and her constantly and delightfully surprising use of words to help us see – yes, really to SEE – the battlefield in front of us and the hovering deities and demons.

The imagery. This is “Night: Shell-Hole”:

Because I am terrified I reach out in the darkness and touch another man’s body.

He is solid, and protection, and unaware of me lying beneath him.

His remains are very still, and this helps.

It is cold and the water seems to rise very slowly.

He is both a man and a caution, here for a reason.

I will wait for daylight to see where we are…

The way his arm is folded, rigid with cold, offers a loophole, a way to see, undetected, and this may open out onto some kind of actionable intelligence that might be kept, carried back, and in some small way, matter.

I have been warned, several times, about this, the risks, what might happen if I raise my head.

The intermingling of the physical world with the spiritual world. This is “That One Time, In December 1914” which refers to the famous Christmas Truce when soldiers from both sides laid aside their guns and greeted each other in No Man’s Land:

the goddess came to the place of hell

and just by seeing her the hell-laborers

on both sides, all of us, were instantly freed

from anger and the results of anger

such as the sufferings of rain and cold,

hailstorms and broken sandbags, and being

pulled apart and chopped up.

lapis lazuli and the hungry ghosts

were sated, the animals no longer suffered,

the demigods were no longer jealous

of one another and the gods

shredded all the maps.

and the sufferings of all sentient beings

stopped, went silent, and across the frozen ground

between us you could hear the carols.

These are just my humble thoughts. I am no poet, nor reviewer of poetry. For a more comprehensive review of Salient by Elizabeth J. Gray, Jr., check out this review.

Or maybe not. Just buy it. And read it. If you find it half as moving as I did, you will indeed be greatly moved by this extraordinary book which gives a new face to the Battle of Passchendaele.

For more on Elizabeth T. Gray, Jr., who is a poet, translator, and corporate consultant, visit her website.

(The Amazon link is an affiliate link: every purchase made through that link gives me a tiny but appreciated income).