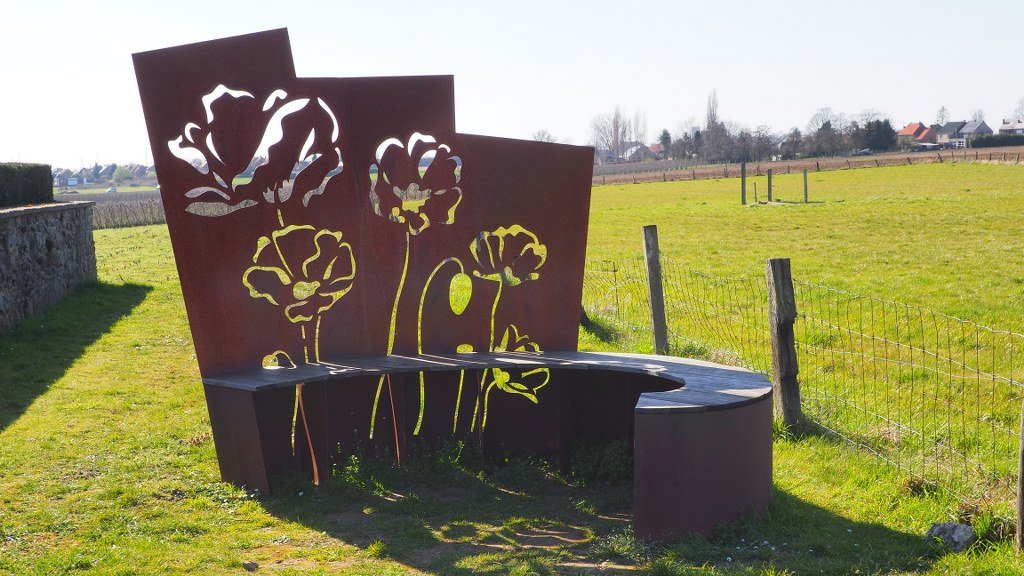 Deep in the heart of the Flemish countryside, this 9 km circular walk around the villages of Sint-Margriete-Houtem and Oplinter takes in a military cemetery, ancient and new orchards, an old convent, and will give you plenty of fresh air and rural scenery.

In these COVID days it’s so important to get out and about. However, this can lead to over-crowding of the more popular hiking locations, particularly in the Ardennes. One of my objectives with Discovering Belgium has always been to provide walks that are “off the beaten path.” And now more than ever this is what we need to reduce contact with people. So here’s another walk around an area that probably few people have heard of – apart from those that live there or nearby.

Sint-Margriete-Houtem is a village in the province of Flemish Brabant and a sub-municipality of the city of Tienen. It’s really in the heart of the Flemish agricultural landscape, and the walk gives you some great views and some interesting points of interest along the way. And unless loads of Discovering Belgium readers decide to visit it on the same day, you’ll probably not meet a soul on your ramble.

The first record of a village called Houtem in this area dates back to 1108. The name isn’t unique: there are villages called Houtem near Hoegaarden (now Sint-Katarina-Hauthem), near Landen (now Walshoutem), near Vilvoorde, and even a Houthem near Veurne over by the coast. Houtem comes from Old Dutch holt + hem, which itself goes back to Germanic hulta “tree forest” + haima “house”. So: house near the forest. To distinguish this Houtem (near Tienen) from other Houtems, a saint’s name was added in 1321 to make it the hyphen-rich Sint-Margriete-Houtem.

Sint-Margriete-Houtem began as a knight’s farm where the current church of Sint-Margriet was later built. As its name suggests, the farm was built on the edge of a forest. The first residents of the farm whose names are known are Arnold Gosselin and his wife Juliana van Huldenberg who lived here in 1258. A small chapel was added to the farm, which in the beginning of the 13th century was enlarged with a square, Romanesque tower. The Gothic choir was built in the fourteenth century. I actually think it’s quite a pretty little church. Very village-sized, instead of some of the huge monstrosities you see around.

It may be a quiet backwater today, but from 1487 until 1560 Sint-Margriete-Houtem was an influential manor and residence of the knights of Houtem. For his services rendered to the city of Tienen and to the Duchy of Brabant, knight Jan van Hauthem, Chancellor of Brabant, was elevated to Lord of Hauthem by Emperor Maximilian I on December 31, 1486, in the presence of the Archbishop of Cambrai and the Count of Nassau, among others. Residents were exempt from paying tax, which was a handy perk.

Things began to go pear-shaped in 1560 when privileges were revoked due to a lack of heirs. Worse still, during the battle of Vissaken in 1576, residents of Houtem were driven from their homes and the village remained empty until 1587 when people started to return. Repopulation was slow. By 1599 only 12 houses were recorded in the village, compared to 44 in 1526.

In 1635 the village and the church were looted by Dutch troops. In 1746 it was the turn of French troops to do some plundering. But Houtem refused to disappear from the map. By 1866, 108 houses were present, housing 458 inhabitants.

walk among the graves

During the start of the First World War, Sint-Margriete-Houtem lay on the Belgian defence line of the River Gete. The Belgian army desperately tried to halt the advancing German Army. During the Battle of Houtem, which took place on August 18, 1914, they failed. 86 Belgian soldiers, a few French and about thirty Germans fell. The local War Cemetery holds the graves of 173 dead soldiers from the war. Of these, three are unidentified. It’s by junction 29.

Sit among the poppies

Immediately outside the cemetery gate you can sit on a bench and enjoy the serenity of the location under the shade of a work of art. Called “Stil” (peace), it’s a design of poppies in perforated steel. It might remind you of other steel artworks in the Hageland. It’s no surprise, its architect is Yves Willems, known for the Vlooybergtoren in Tielt-Winge.

The most well-known building in the area was the Maagdendaal Convent, founded around 1215. You can see it at junction 210. It was here in around 1235 that the mystical writer, Beatrijs van Nazareth, wrote what is currently the oldest preserved text in Dutch: “Van seven manieren van heiliger Minnen” (Seven ways to become holier). And yes, you’re right, when translated the name of the place is the Convent of the Valley of Virgins.

The nuns weren’t able to elude the troubles in the area that I mentioned earlier. On December 6, 1796, they were forcibly expelled from the convent, despite the vigorous protests of the abbess.

You will pass by the gatehouse to the convent farm. The gatehouse dates from 1661. The inscription reads “S (anctus) Benedictus Abbas” (abbot Saint Benedict). At the bottom it says “Vallis Virginum” (Valley of the Virgins). It looks as the roof could do with a bit of TLC.

Pass by orchards old and new

Just after junction 211 you’ll see an ancient orchard on your right-hand side. It’s strange to think that these kinds of orchards were the norm rather than the exception. We are so used to seeing the military precision of the rows of low-growing fruit trees of modern varieties. Often these old fruit trees are cherished as heritage, and their gnarled trunks and root cavities provide valuable nesting locations for little owls, tits, hedgehogs, mice, voles and bumble bees, to name just a few beneficiaries.

There are plenty of the newer orchards in the area. In fact this walk would be most colorful towards the middle or end of April when the fruit trees are in blossom. For the moment (March) just the leaf buds are appearing.

Make a detour into Oplinter

The route circles around the village of Oplinter but you could easily make a detour to check it out. The village center is dominated by the church of Saint Genoveva (Genevieve). As you can see, it’s much grander than its smaller relative down the road in Sint-Margriete-Houtem. It was largely built in the 14th century but has been expanded through the centuries. There’s a café and a patisserie in the village if you want to replete your energy.

Below is the map. As always on this site, you can click on it to enlarge, download the map as a PDF,, or get the GPX track for your GPS device from my RouteYou page.

If you are arriving by car, you could park along Wijngaardestraat. By public transport you need to get off at the Sint-Margriete-Houtem Dorp stop which is right outside the church. There are regular De Lijn buses from Tienen railway station to that stop. Alternatively you could walk from Tienen station but the distance is 3.6 km. The first walking junction to look for is number 200. You can go clockwise or anticlockwise. The total distance is 9 km. As this route is part of the walking junction network it’s easy to shorten or extend the route to fit your time and energy.

So, on with your walking boots, pick up your trekking poles, and off you go! Let me know how you get on, either in the comments below, on the contact page, or even on WhatsApp:

If you want to get more walks like this straight into your inbox, add your email below. And if you find this blog useful and want to continue to see an advertising-free Discovering Belgium, please consider supporting it for as little as 3 EUR to help with the costs. Thanks, Denzil.