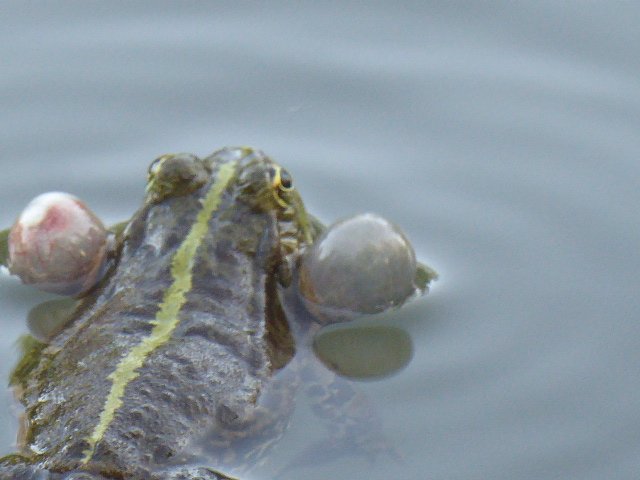 Springtime is the season for mating and having babies – at least in the wild!

The green frogs in my local park have been in full voice recently. In fact they have been making quite a cacophony. I reckon I could hear them up to a kilometer away. In the video below is just one of the choristers in action, but you can hear scores of others in the background. Only male frogs make these loud croaking sounds in the springtime. They do it to advertise their virility, availability, and location, to other males as well as to females. Each species of frog has its own croak, which helps female frogs identify them.

How do frogs croak?

A frog produces its croak by closing its nostrils and pushing air from its lungs over the vocal chords (in the larynx) and through the wind pipe (trachea) into the air sac. This is the sack that you can see blowing up in the video above. In this species the air sac pokes out to the side of the frog; in other species it’s to the front. The air sac acts like a resonance chamber and magnifies the sound. This is why you can hear it from quite a distance away. Frogs are also outstanding circular breathers. They can force the air from the air sac back into the lungs in a circular path. This allows them to croak continuously. They can even croak if they are under water! Read this article with more in-depth info on croaking frogs if you are interested.

Donald and his brothers and sisters

In a quiet backwater from Frog Lake, a pair of mallards had nested. Ten ducklings hatched. At first the mother duck kept the ducklings well under cover and close surveillance. But now they are a couple of weeks old, she seems to be more content to give them a bit more freedom. Eight seem to have survived so far.

It’s the female mallard that you can see looking after the ducklings. Two male mallards (drakes) make an appearance in the video towards the end, but whether one of them is the father of this clutch or not, it makes no difference. Drake mallards take no responsibility in rearing the ducklings when they hatch. They just get together with other males and … “hang out.”

Meanwhile in the Coot household …

Coot Dads are much more “hands on” than “hang out”. In the springtime, both the female and the male take responsibility to feed the chicks. In this video below, the two coot chicks can only be a few days old. They are being very well looked after by their parents. The male coot can be distinguished from the female coot by his larger white shield above the beak. I reckon therefore that the first one you see is the female; the second one is the male.

Shall we get a bit technical? Why not!

Coot chicks can be described as being both precocial and nidifugous.

Precocial means that the young are relatively mature and mobile from the moment of hatching. The opposite is called altricial, where the bird is hatched in a helpless state. Coots, moorhens, ducks, geese and swans are precocial. Most common garden birds such as blackbirds and robins are altricial.

Nidifugous means that the baby birds leave the nest shortly after hatching. A precocial species is normally nidifugous. So within hours, these cootlings (and ducklings, goslings and cygnets) will have left their nest. Blackbirds and robins, on the other hand are nidiculous: they stay in their nest for a long time because they depend on the parents for food and protection.

Ah, you say, so all precocial birds are nidifugous? No, some birds are precocial yet nidiculous. In other words, they are relatively mature and mobile after hatching, but they still stay in the nest for a long time because they depend on their parents for food and protection. Examples include gulls and terns.

If you have any photos of videos to share of young birds, animals or amphibians you have come across, just send them over to me and I will be happy to add them! This may be a fun Springtime activity for children?