The Reconstruction of Ypres 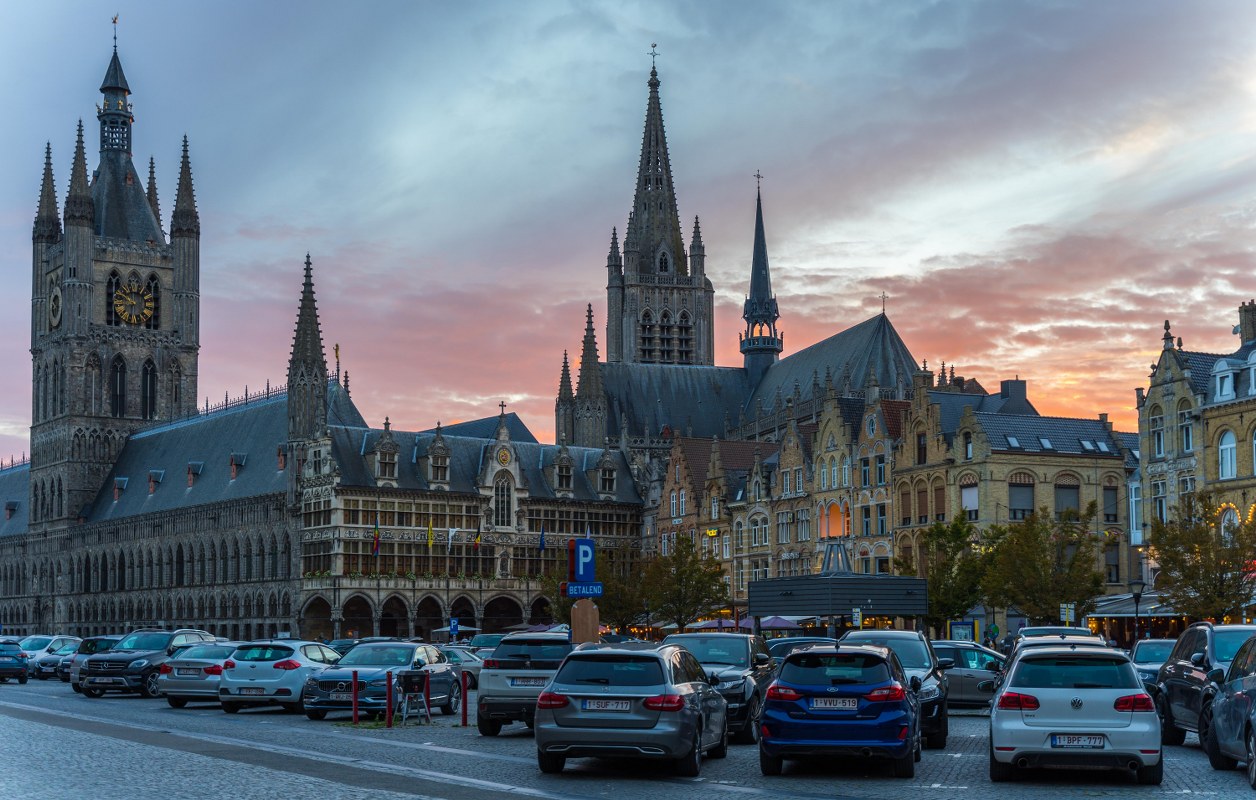 During the First World War the old medieval town of Ypres was the centre of one of the most notorious battlefields the world has ever experienced: the Ypres Salient. In the four years of the war, the entire town centre was virtually totally destroyed. By the time the war ended, a person on horseback could look right across the town. Not surprisingly, it was deserted: the whole population had fled or had been forcibly evacuated.

Yet just ten years after the Armistice, Ypres looked like the town had never experienced a war. Almost all the destroyed buildings had been rebuilt. Today, Ypres is generally considered one of the best examples of post-conflict reconstruction.

THE BOOK: THE RECONSTRUCTION OF YPRES

Dominiek Dendooven and Jan Dewilde – who work for the Ypres’ museum services – have written a fascinating book describing this incredible rebuilding of Ypres. But it’s no dry history book. They have created a 2-hour walk around the centre of Ypres. It takes you to 40 examples of Ypres’ post-war architecture.

Below is a map of their walking route. You can download it as a PDF to print and carry around with you. You can also get the GPX route from my RouteYou page. But to optimally experience the walk, you should buy the book and use it as a guide. Purchasing details are at the end of this post.

However, the publisher kindly agreed to let me reprint some of the photos from the book.

The book sets the scene, describing the thriving market town of Ypres. It had a military riding academy and infantry barracks. Its centre was home to a number of affluent and influential residents. Around its outskirts were magnificent villas.

The town’s wealth was built on the production of flax, lace, cotton and soap. Ypres attracted many tourists, particularly to the Cloth Hall, the largest non-religious gothic building in Europe. This memorial to the town’s medieval hey-day had survived centuries of periodic siege and war. It contained beautiful frescoes that portrayed the town’s grand past.

YPRES DURING THE FIRST WORLD WAR

The war arrived in Belgium on 4 August 1914. Ypres’ first experience of it was on 7 October when the town was plundered by a German cavalry division. (They left with 8,000 loaves of bread!). The First Battle of Ypres broke out two weeks later. The most famous monuments of the town – the Cloth Hall and St Martin’s Church – were soon ablaze. Over the following four years, the entire town was destroyed.

At its peak, up to 20 shells were falling on the town every minute. During the four years of the war, the front line was located just 11 kilometres away from the town centre at best, and a mere 1.5 kilometres away at worst.

The authors then describe the various scenarios for the reconstruction of the town. The British Secretary of State for War, Winston Churchill, wanted to preserve Ypres as “holy ground”: a symbol of the war and British sacrifice. But city architect Jules Coolmans had other plans. He intended to completely rebuild the town, retaining a “Flemish, medieval and renaissance” appearance. The local Mayor sided with Coolmans, and plans began to be put into action.

As I mentioned, the book describes – and takes you there if you follow the walk – 40 examples of reconstructed buildings. Here I’ll share just five or six.

The lower floor of the Great Meat Hall was built in the second half of the 13th century from natural stone. The upper floor in brick dates from 1529. In the early months of the First World War, the building was razed to the ground.

In 1923 it was extremely precisely reconstructed, even using the same types of wood.

While the reconstruction was ongoing, huge numbers of temporary houses needed to be built. Until the First World War, the Minneplein was a large, attractive grassed square.

After the Armistice, the area was soon filled with emergency dwellings. For several years, the real Ypres was to be found here. Among the hundreds of huts could be found the Town Hall, the St Martin’s church, the state police barracks, and two schools.

One house you have to visit is in an un-named street (between Slachthuisstraat 18 and 22). It’s an exceptional witness to the solution of the housing shortage after the First World War: an authentic emergency dwelling. In contrast to the wooden huts on the Minneplein, this is a wooden structural skeleton with brick walls. It dates back to 1919! Since then it’s been modified and plastered many times.

The beautiful Our Lady’s Hospital with its French style architecture was, however, not reconstructed. It was not considered appropriate to have a hospital in the very centre of the town, for reasons of hygiene. In its place, a new Court of Justice was constructed.

The Menin Gate is one of the most famous war memorials in the world. In the book its design and construction is covered. However, completely independently of my research into this post, I have received a number of outstanding original photographs of the construction of the Menin Gate. So I will be devoting a separate post to this subject shortly.

If you’ve got this far, one question on your mind is probably “What does Ypres look like today?” To answer this question I contacted blogger and photographer Stefaan who lives in West Flanders. He posts his photos on his wonderfully named blog Ostendnomadography and his Instagram page. I asked him if he had any contemporary photos of Ypres, and he said he was planning to go there for a photo shoot. He went yesterday and gave me permission to reproduce some of his lovely photos of modern-day Ypres. Thanks Stefaan!

OTHER TOPICS IN THE BOOK

The book is a treasure chest of information. It covers much more than the 40 pre/post-war buildings. I also enjoyed reading the following:

WHERE TO BUY THE BOOK

The Reconstruction of Ypres by Dominiek Dendooven and Jan Dewilde (ISBN 9781913491048) is published by Unicorn Publishing in the UK. It is available for purchase on Amazon.co.uk (it doesn’t seem to be available on Amazon.com), Bol.com or Belgian bookshops such as Standaard Boekhandel. The book is also available in Dutch: De Wederopbouw in Ieper (ISBN 9781913491314).

Addendum: Reader Jacques points out that the book is also available at Amazon.nl, Amazon.fr, Amazon.de, and Bookdepository (best price).

I hope you enjoy both the book and the walk. If you want to receive my forthcoming post on The Construction of the Menin Gate – and other new posts – directly into your inbox, add your email below:

And if you have found this post useful and you would like to support Discovering Belgium with a small donation, feel free to buy me a cup of coffee. Thank you. Denzil

39 thoughts on “The Reconstruction of Ypres”