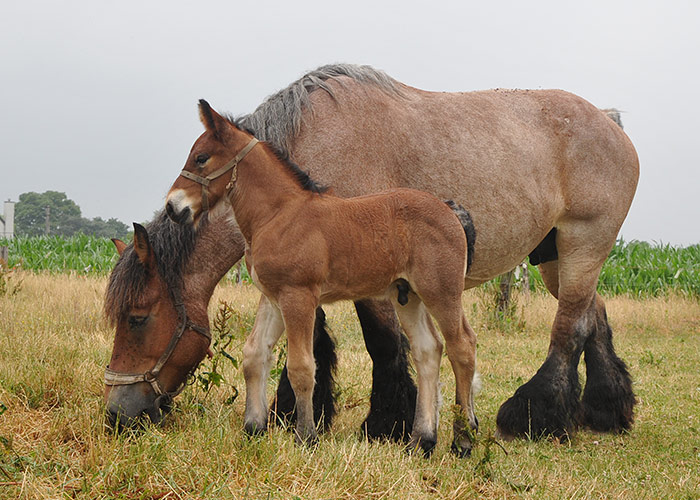 The origins of the Belgian draft horse

The tiny Belgian village of Vollezele is now so small it’s hardly noticeable. It’s therefore difficult to imagine what it was like from the 1880s until the 1930s. Then, Vollezele was bustling with activity. It was the center of all operations around the Belgian draft horse. Indeed, Vollezele was indispensable to the economic success of Belgium!

It all started back in the 1850s, with one man’s vision. Belgian horse-breeder Remi Vander Schueren realized that the increasing industrialization of Europe would require stronger horses to pull ever heavier machinery. He therefore started to interbreed the three types of draft horse existing in Belgium. The result was a single breed. He called it the Belgian draft horse.

His work soon paid dividends with the arrival of the magnificent stallion named Brillant. Between 1878 and 1884, Brillant was crowned champion at major draft horse competitions in Brussels, Amsterdam, London, Paris and Hanover.

What made Belgian draft horses special?

Belgian draft horses — particularly those sired by Brillant — were suddenly in demand throughout Europe, and for good reason. Powerfully built and standing between 16 and 17 hands, they were incredibly strong, able to pull up to two tons.

Yet at the same time they were docile and would willingly let themselves be attached to wagons or machinery. They thus became indispensable in a variety of industries such as agriculture, forestry, mining, shipping and brewing. Here’s a 5-minute video of Belgian draft horses in action on a farm in Merelbeke, near Gent, Belgium.

Vollezele became a magnet for horse dealers. Initially they came just from western Europe. But as word spread, horse dealers traveled to Vollezele from the eastern Bloc and Russia. Dealers would travel by train to Brussels and then by horse-drawn coach to Remi Vander Schueren’s farm in Vollezele.

By this time other local breeders had jumped on the bandwagon. At one time no fewer than four renowned breeders of Belgian draft horses lay within the boundaries of Vollezele. Frequently over one hundred buyers would pass through Vollezele each day. At any one time there might be 160 stallions for sale.

Records from 1891 show that Belgium exported draft horse stallions to the government stables of Russia, Italy, Germany, France, and the old Austria-Hungary empire. The Belgian government was quick to see a potential goldmine across the Atlantic. In 1903 it sent Belgian draft horses to the St. Louis World Fair and the International Livestock Exposition in Chicago. American farmers loved these powerful horses and demand was huge. The following year, 1600 Belgian draft horses were exported to the USA, most of them from Vollezele.

The tragic consequences of the war

However, the success was short-lived. During the First World War, draft horses from all over Belgium (and elsewhere) were requisitioned by the German and Allied armies. They were used to transport ammunition, artillery and supplies to the front line. Most of the horses did not survive the experience.

Horse power gets another meaning

In 1917, Henry Ford developed the Fordson, the first mass-produced tractor. With almost embarrassing haste, natural horse power was replaced by mechanical horse power. Although they continued to be used in forestry, especially where narrow hillside tracks were inaccessible to the early tractors, the golden age of the Belgian draft horse had abruptly come to an end. Nowadays they are still bred, but mainly for show purposes.

Discover the history of the Belgian draft horse

Anyone interested in horses or simply fascinated in the past, the Belgian Draft Horse Museum in Vollezele is worth a visit.

The walls are covered with black and white photographs of these magnificent animals in action. Upstairs is a huge ornamental harness that would have been worn by a draft horse in a championship.

Documents describe the vast numbers of horses sold. It’s fascinating to see how prices rose as their popularity increased. The museum is open only on Sunday afternoons or by appointment for groups.

In a strange turn of events, Vollezele is once more attracting international visitors. They may not be flocking in the same numbers as a century ago. But horse-loving visitors from Denmark, America, Germany, Canada, New Zealand and Australia have passed through the museum in recent years and signed the guest book. Who knows, maybe their ancestors once visited Vollezele and signed a contract for a Belgian draft horse?

“Vollezele is the only place in Belgium I’ve heard of”

An interesting story was related by a Flemish lady who visited the museum. She had just returned from the USA. There, while travelling in a train in Ohio she got into conversation with a fellow passenger. He turned out to be an Amish farmer. The train passed a field full of horses, which both of them recognized as Belgian draft horses. The lady told the farmer that she was from Belgium. The farmer’s reply surprised her.

“I’ve never been to Belgium; I’ve never even been outside Ohio,” said the Amish farmer. “I couldn’t even name the capital of Belgium. But I have heard of one place in Belgium. Vollezele. It’s where America’s Belgian draft horses originate from.” Even in the 21st century, the name of Vollezele as the center for the Belgian draft horse still lives on!

Belgians are Big in America!

These days you have more chance to see a Belgian draft horse in the USA than in Belgium.

The Belgian Draft Horse Corporation of America dates back to 1887. It maintains a register of the importation and genealogies of imported stock and their descendants in order to maintain a pure breed. It also issues certificates of registry and transfer of purebred Belgian draft horses.

In the States, besides being used in its traditional role as a source of farm/ranch power and logging operations, many owners of Belgian draft horses compete in halter, hitch and riding classes, horse pulls and plowing competitions. Others are employed in the tourism industry, in carriage services and used in advertising and any number of means for pleasure and recreation.

However, after World War II, in the United States the Belgian draft horse was bred to be taller, lighter bodied and clean legged. In Europe the breeding continued along traditional lines, especially in Belgium and the Netherlands. These horses retain the thicker bodies and heavier feathering on the legs of their predecessors.

Finally, if you still haven’t had enough of pictures of these gorgeous horses, here’s a 10-minute video of some more. These are working horses trained in ecological forest management.

Or we could get all romantic:

Add your email below and keep up-to-date with all posts on Belgium!

19 thoughts on “The Belgian draft horse”