The tastes – and customer service – of Mechelen 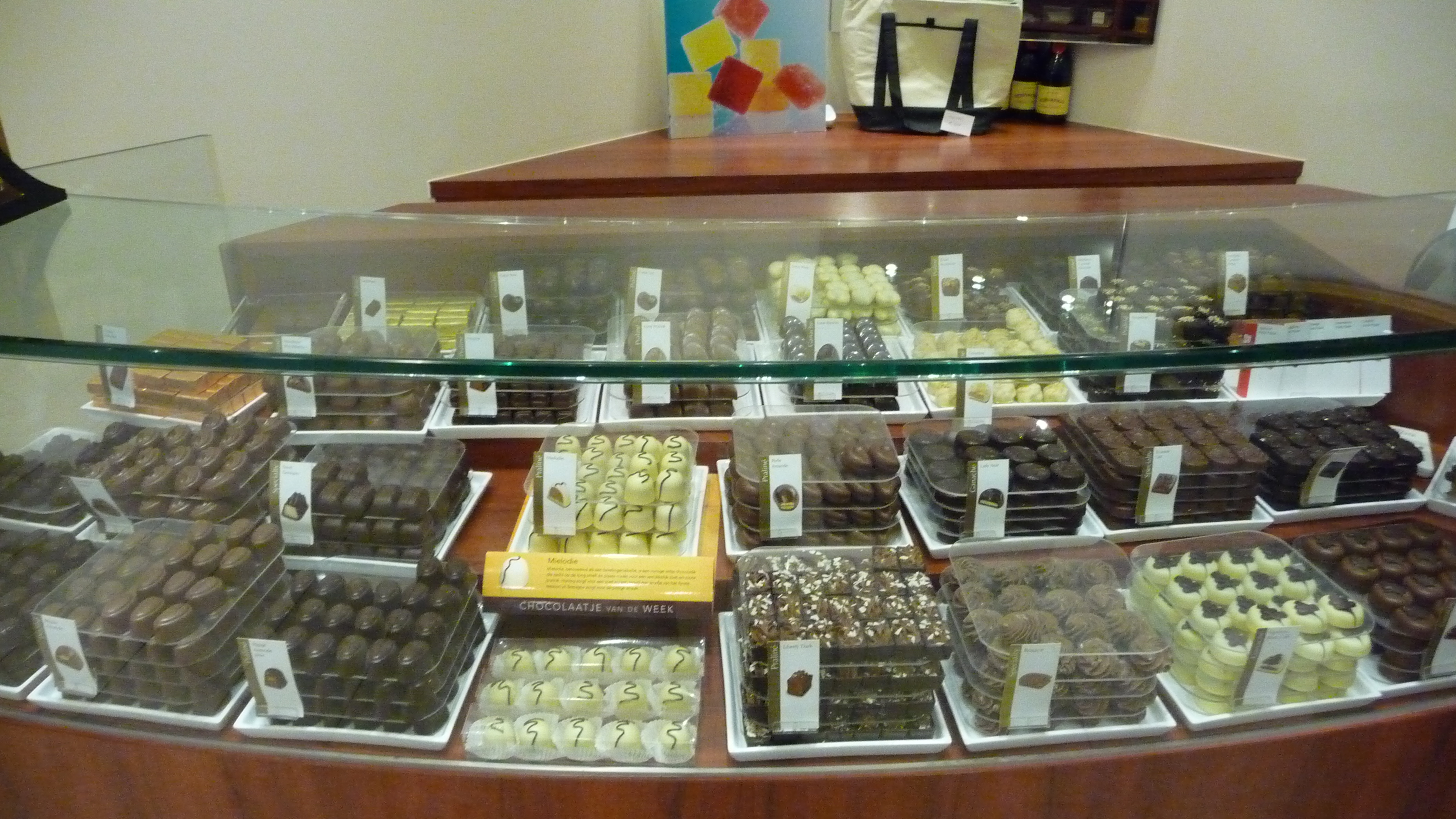 I was recently invited by Mechelen Tourism to try out their Sense-Sations. This is a book of six coupons that you can buy (for 5 EUR), which enables you to visit six different shops in the centre of Mechelen and sample their local wares. Never one to turn down the kind offer of free food, and keen to explore more of this attractive city, I was quick to accept. Here’s a report of my experiences.

First up was CafÃ© Sava on the Grote Markt: 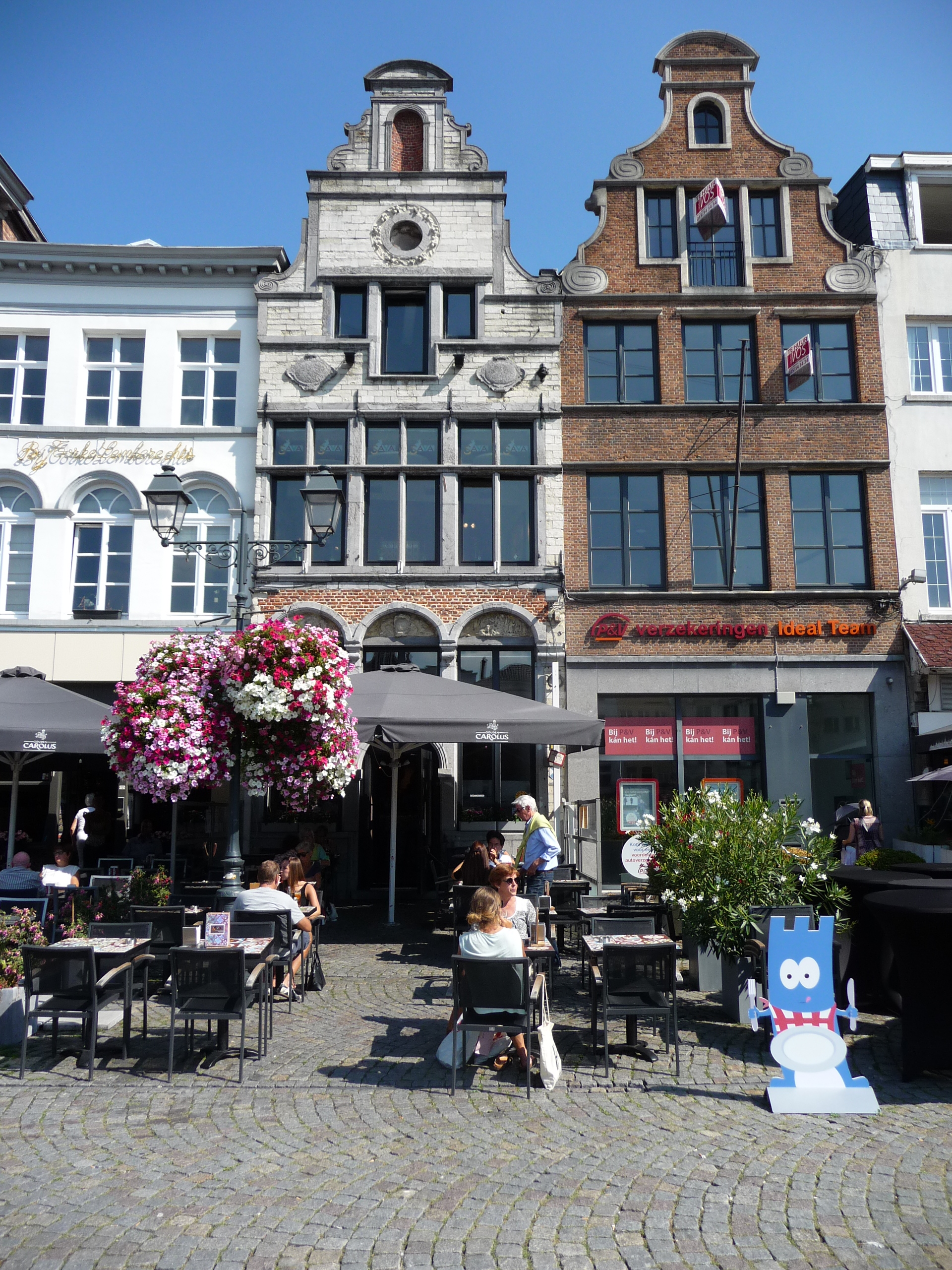 Here I could get a “Sweet Sin”, an apple pie spiked with Gouden Carolus Beer: 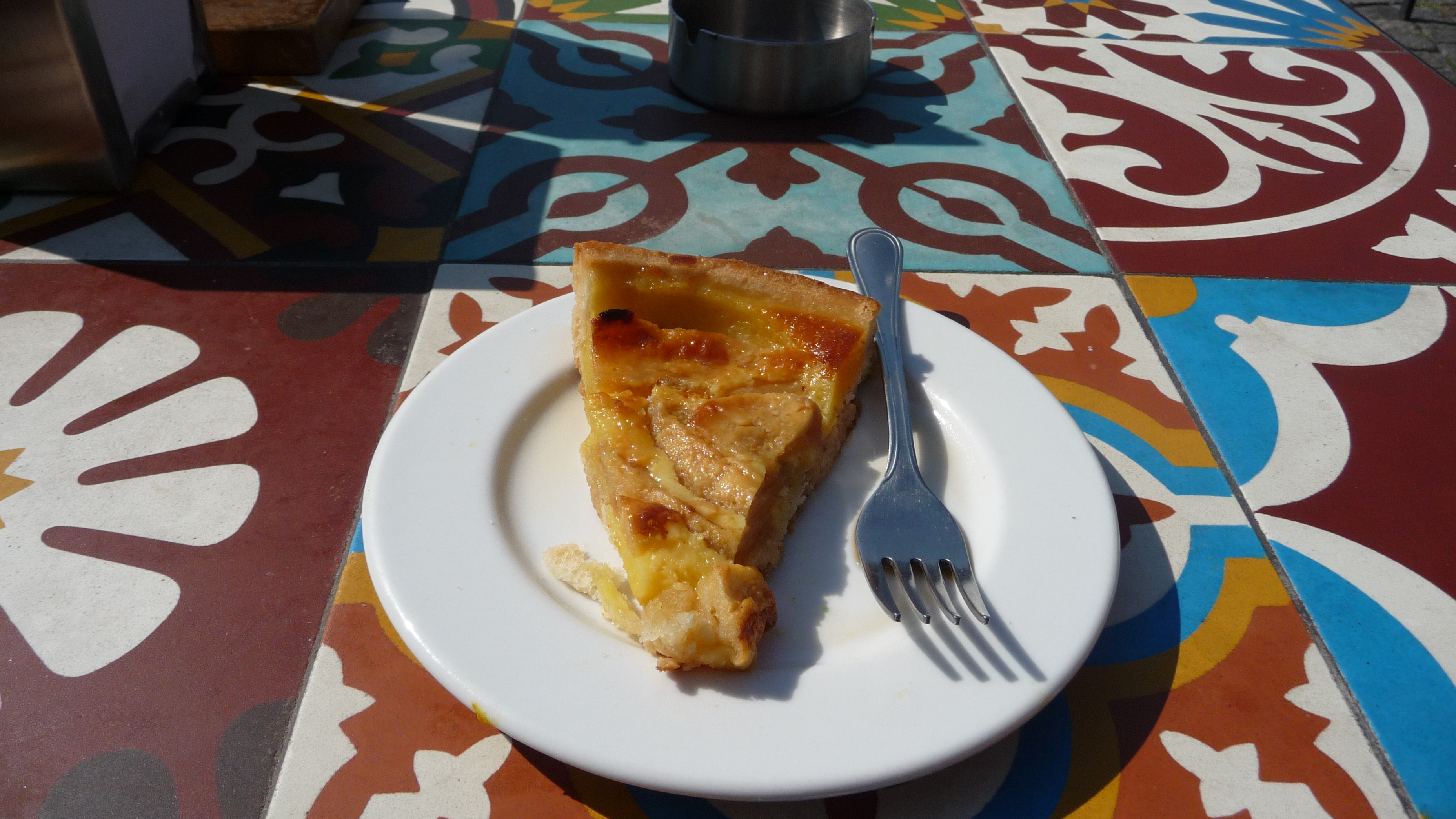 Verdict: tasty. Bit on the small side (it looks bigger in the photo), but it was a good start to the day. And the cafÃ© is ideally located on the Grote Markt, from where you can sit and watch the world pass by. Thankfully it was a gorgeous August day when I did my tour of Mechelen

Next step was Bakery Vanderbeek & Godiva in the Steenweg: 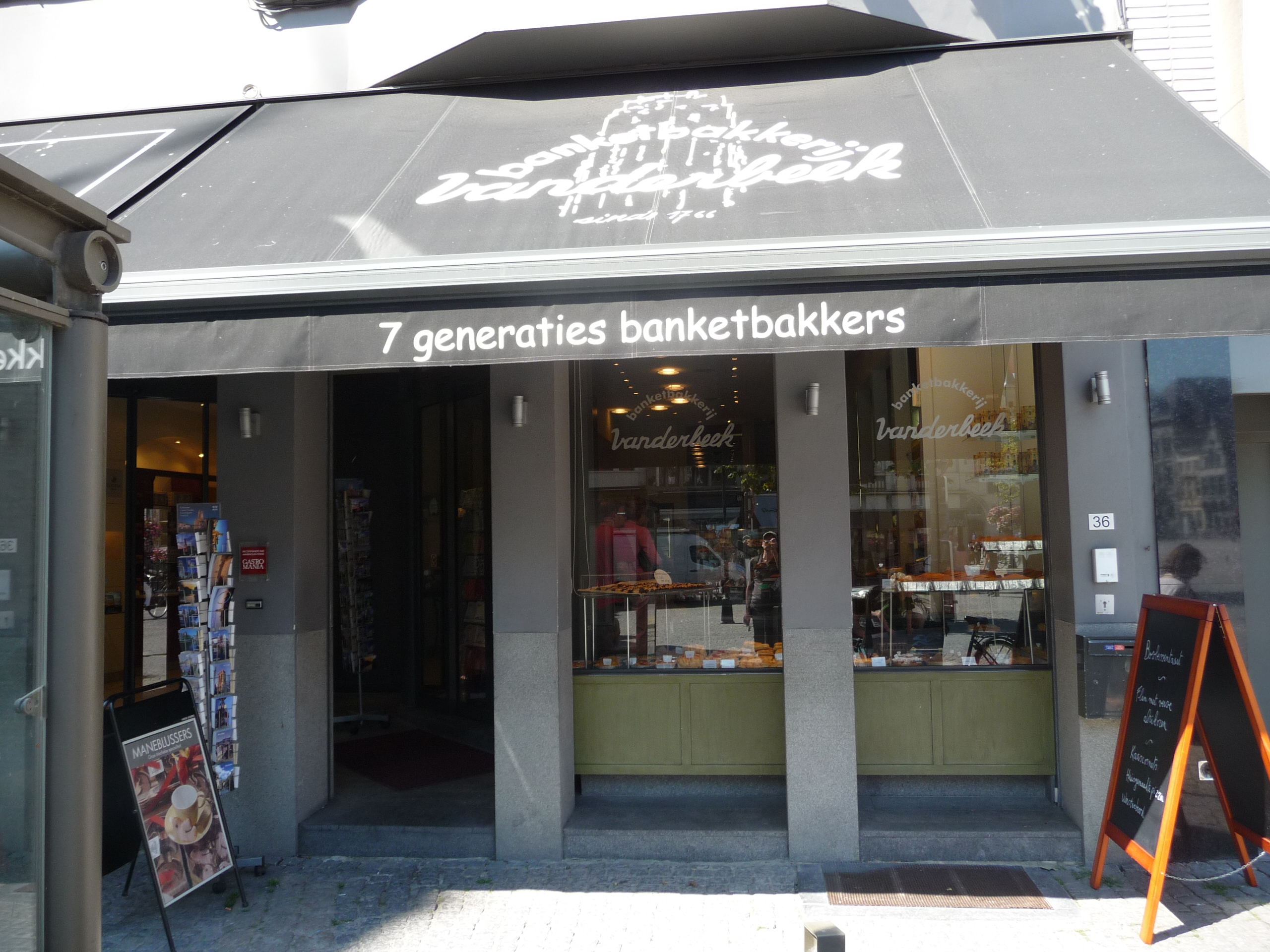 They had a super display of magnificent chocolates and my mouth was watering as to which of these I would be receiving: 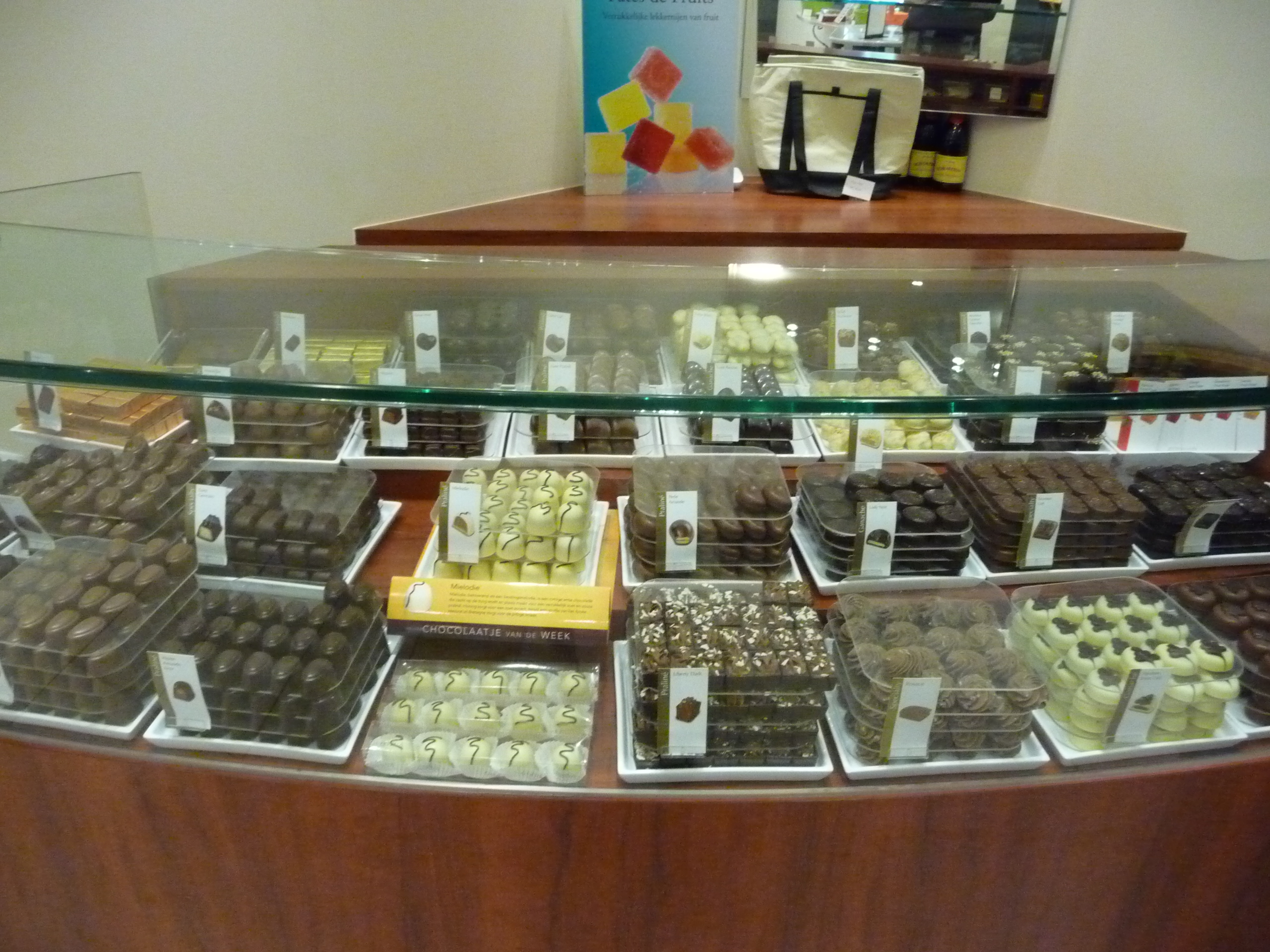 Unfortunately, none of them! I was taken to another counter and given these: 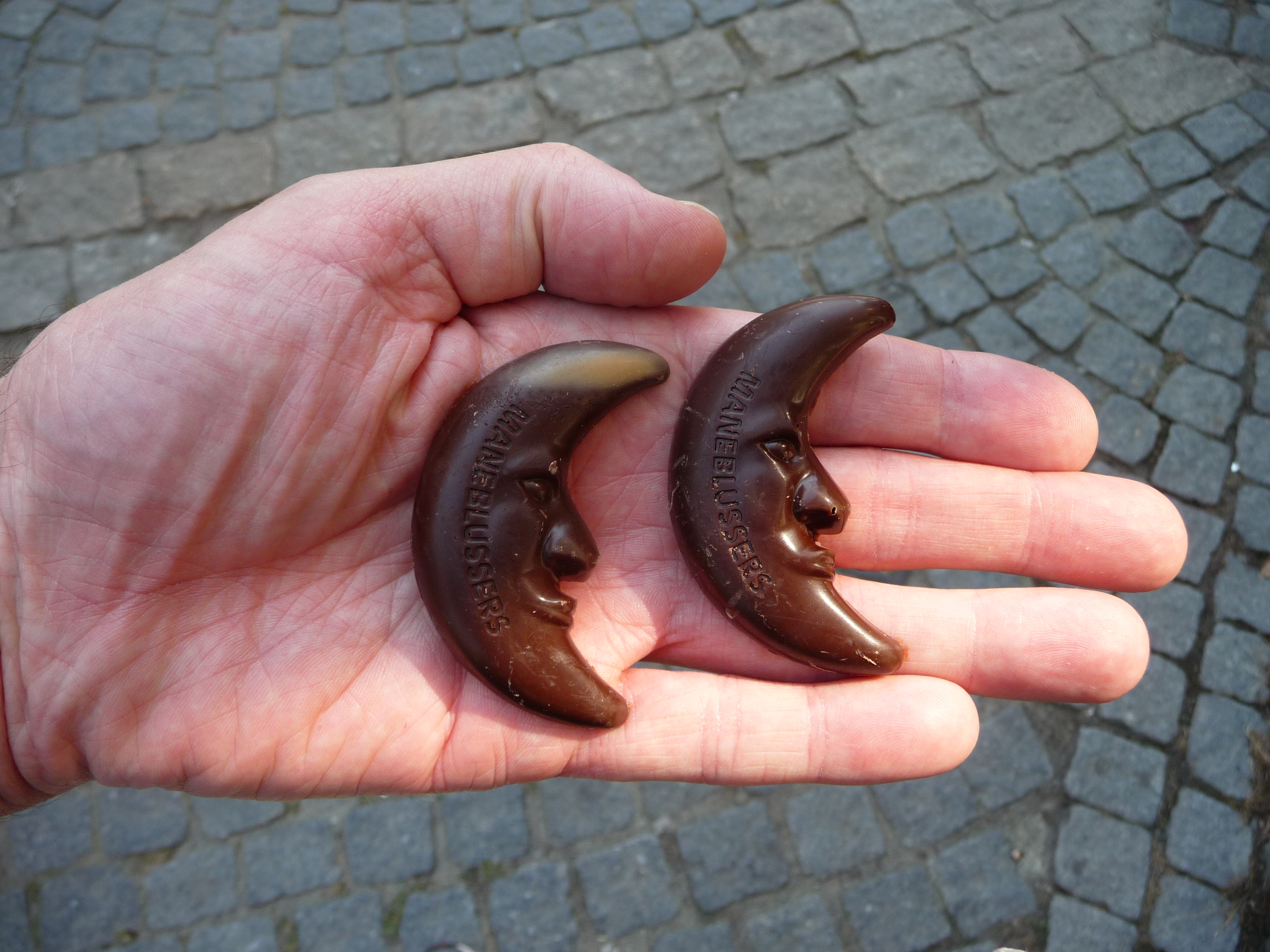 Verdict: Well, not quite what I was expecting, but delicious nevertheless. I thought the shop assistant might have explained the meaning behind the moon shape (residents of Mechelen are called maneblussers or moon extinguishers after someone mistook the moon shining on St. Rumbold’s Tower for a fire), but she didn’t. 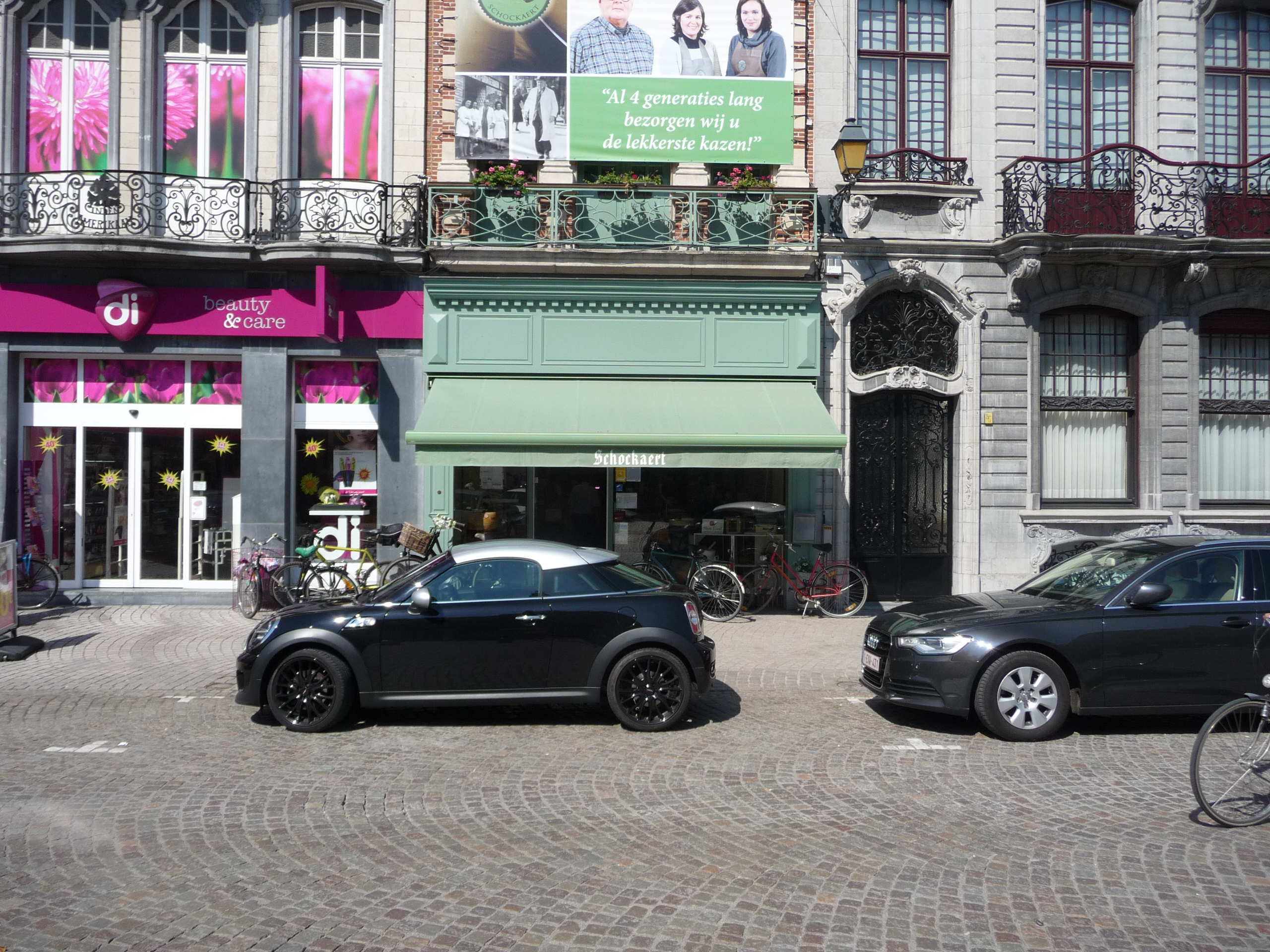 Again, the displays of cheeses were impressive: 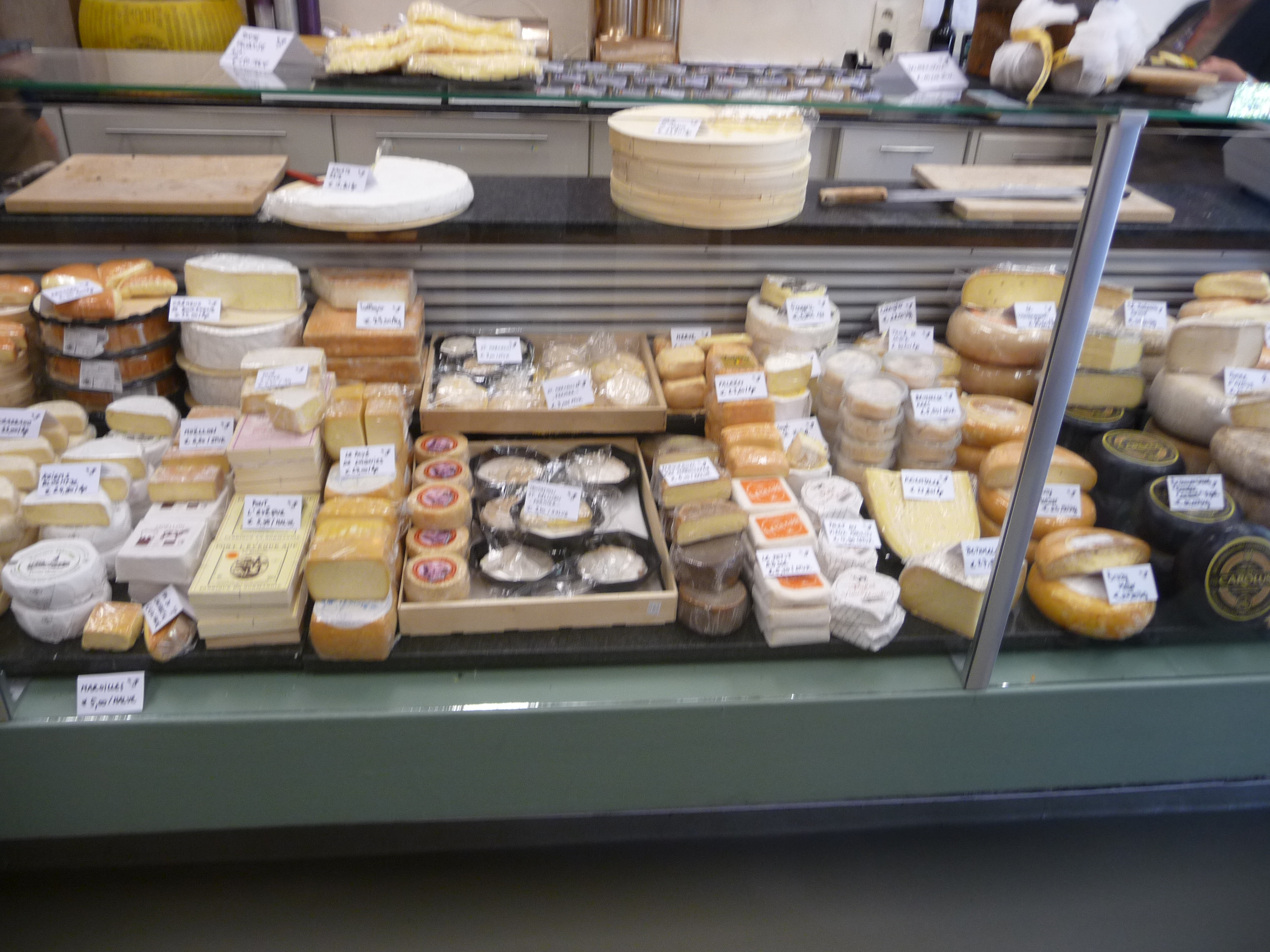 But I was beginning to realise that my coupon wasn’t likely to allow me to do much in the way of cheese tasting. You can see from the grapes that the slices were not very large: 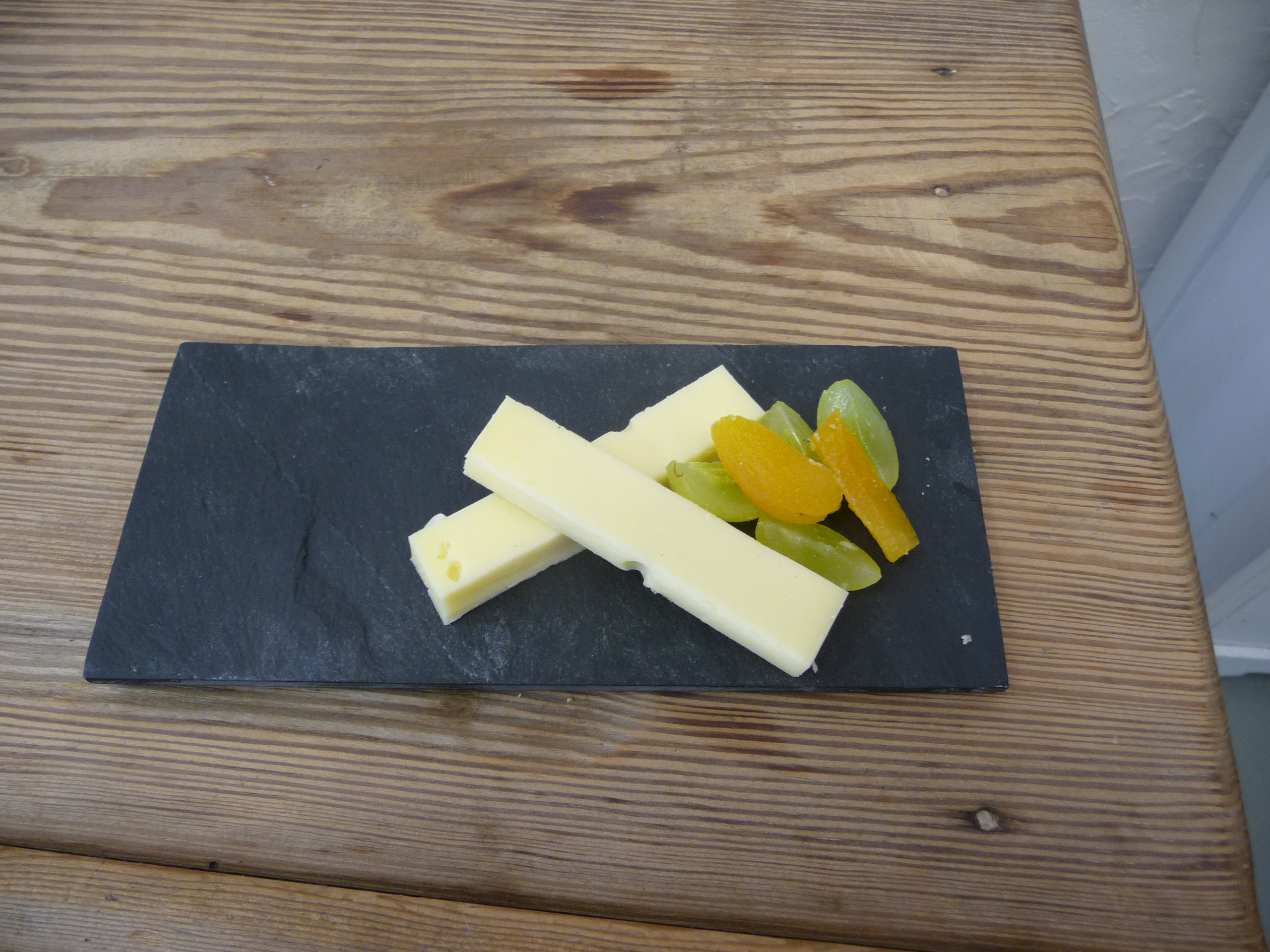 Verdict: Disappointing. The shop assistant clearly thought I was in the way, and rather hastily cut a couple of slices of cheese and handed them to me with no explanation of what cheese I was eating and why it might have been a local Mechelen speciality.

By this time it was approaching lunch, so I made my way to Chip Shop Korenmarkt: 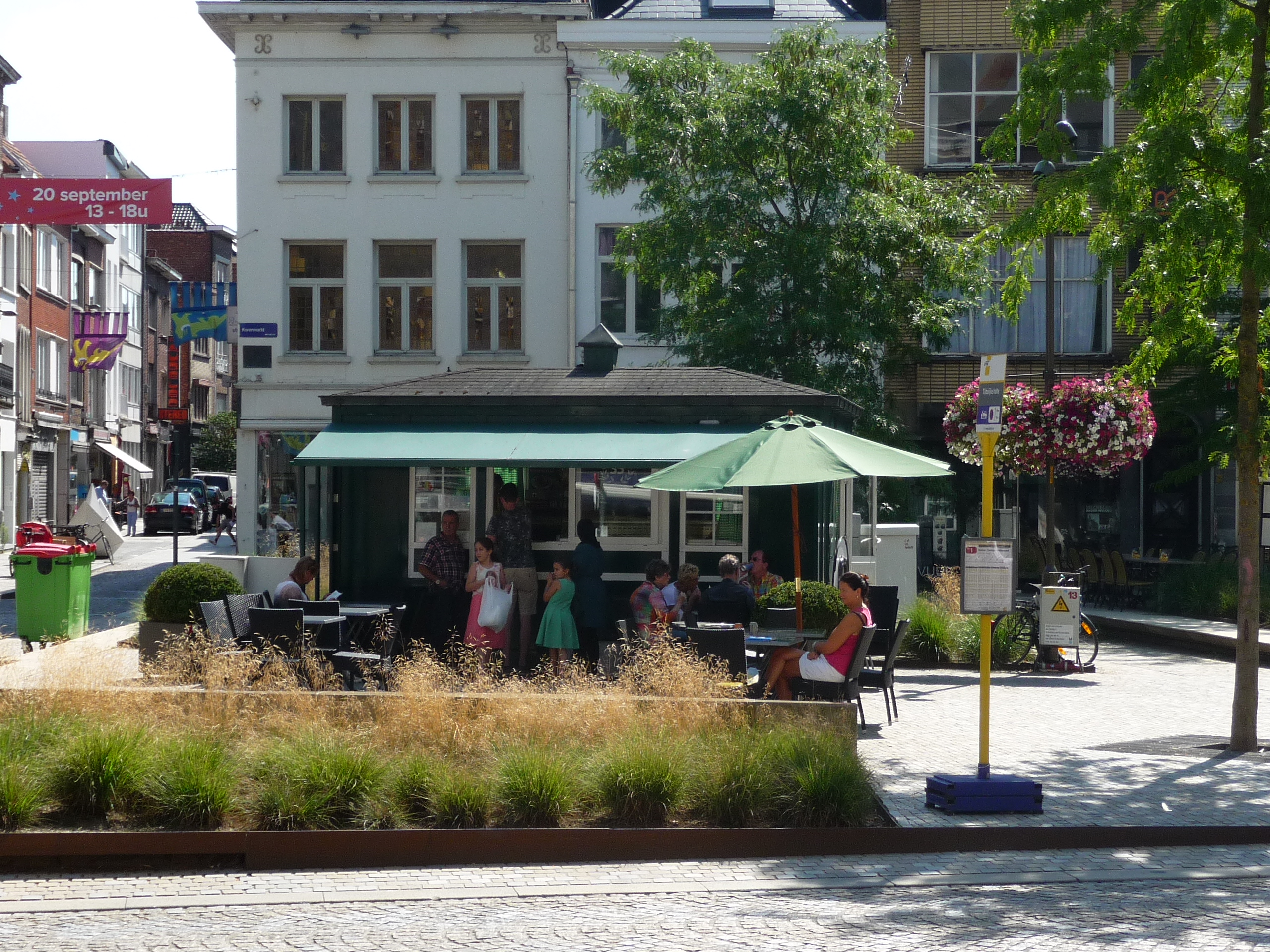 and guess what I got: 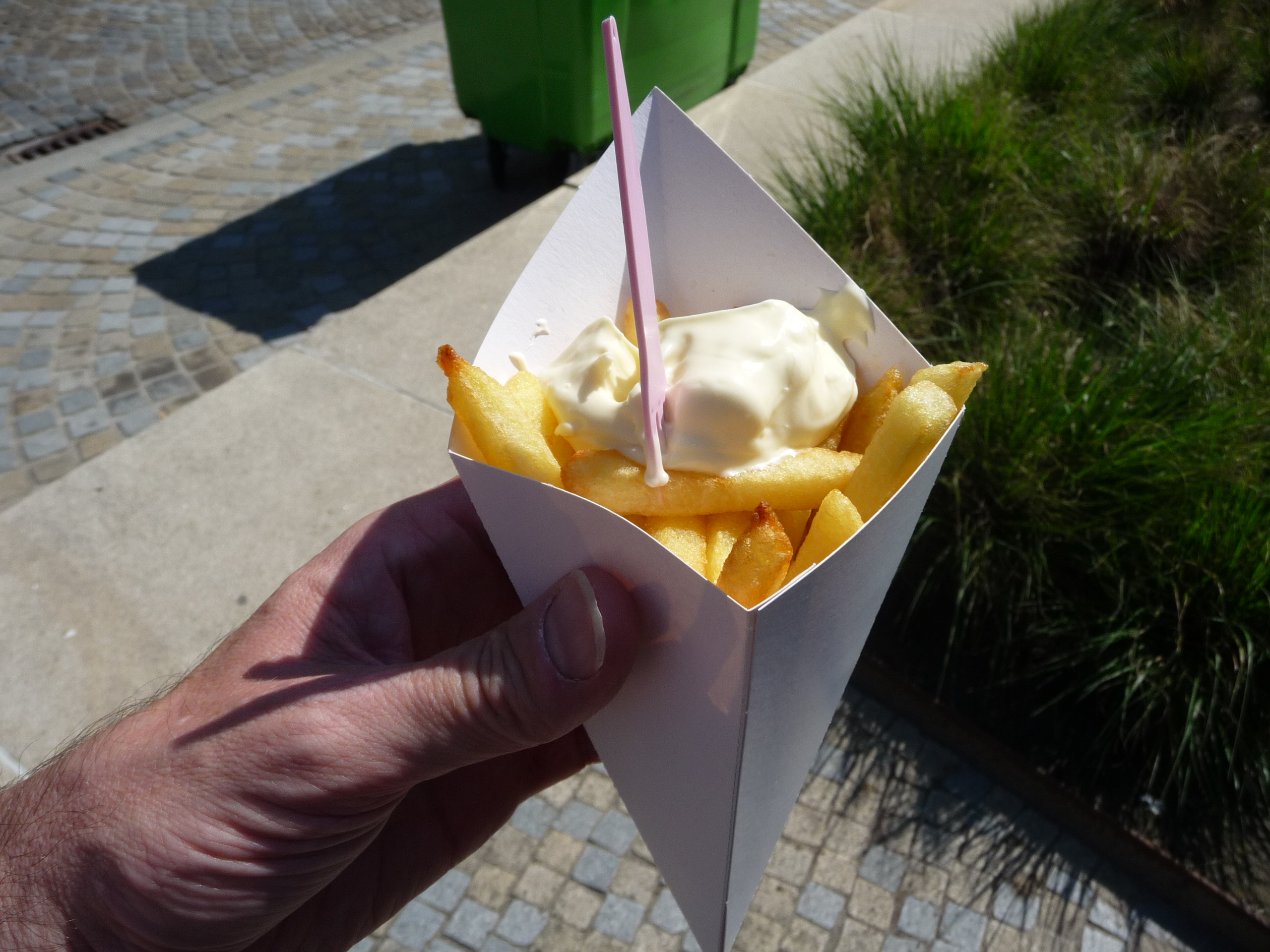 Verdict: You can’t go far wrong with a pakje of Belgian frites!

Then it was time to walk off my lunch (!) with a stroll over to Sint-Katelijnestraat to pay a visit to Bakery Matthys: 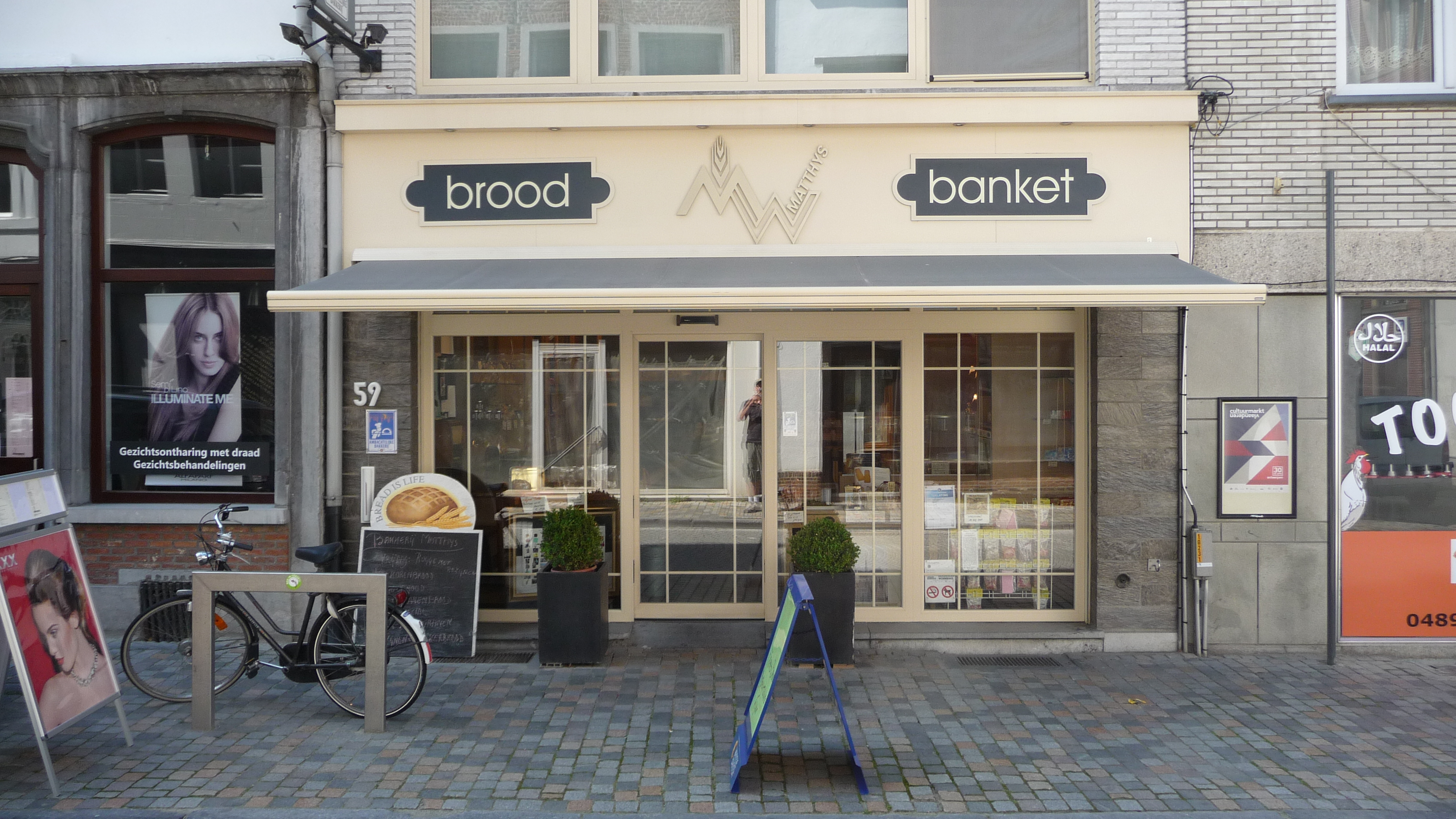 My booklet said I could sample six typical Mechelen biscuits, which turned out to be: 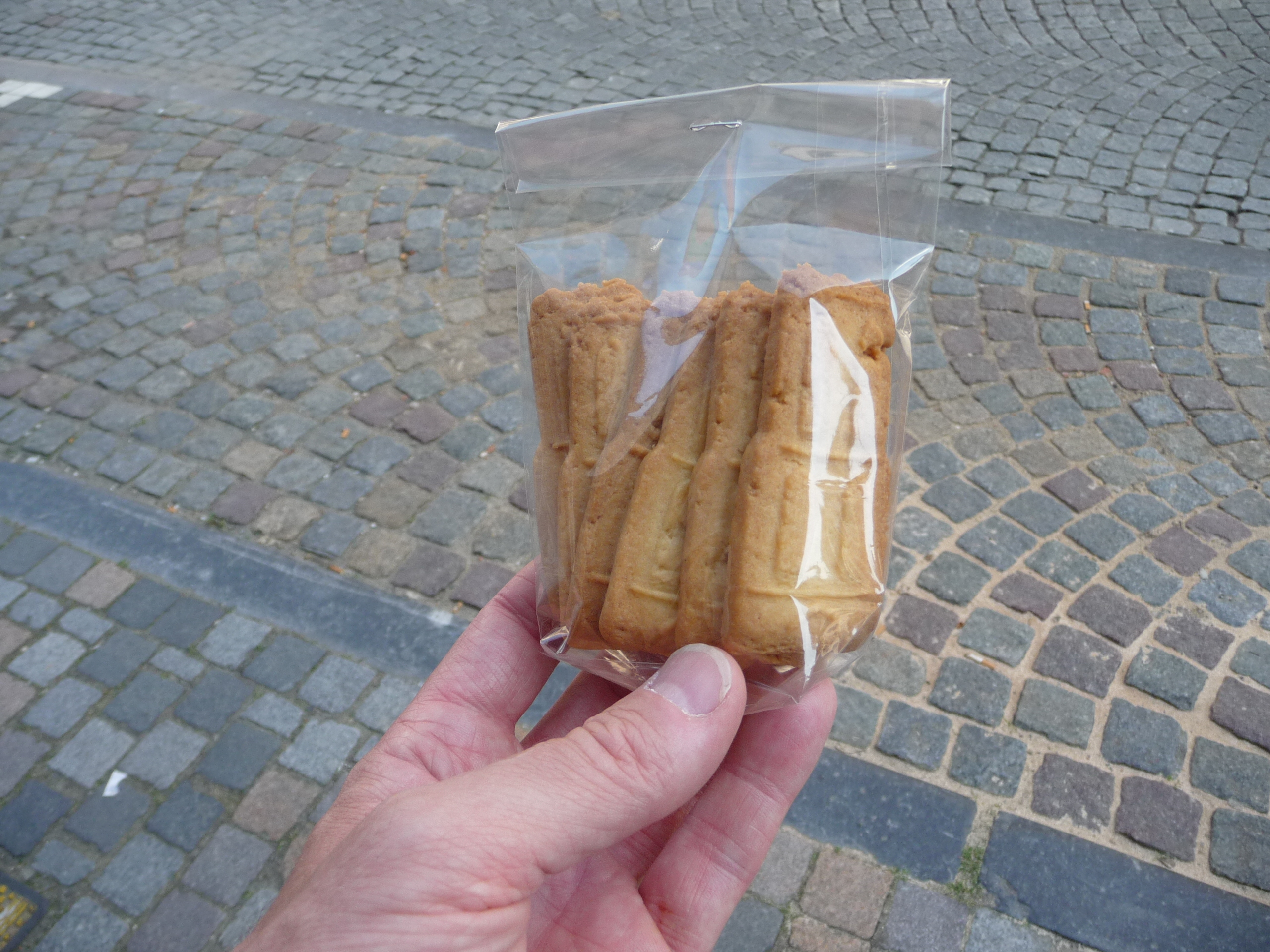 Verdict: Well, that’s what I was promised so I can’t complain. Again, I was just handed them by the shop assistant, without any explanation of what makes them typical Mechelen biscuits. (And it wasn’t because she was busy; the shop was deserted. Nor was it because she couldn’t speak English, because I was speaking Dutch)

After eating all those dry biscuits I was feeling rather thirsty so was glad that the final step on the Sense-Sations tour was Het Anker Brewery’s Brasserie: 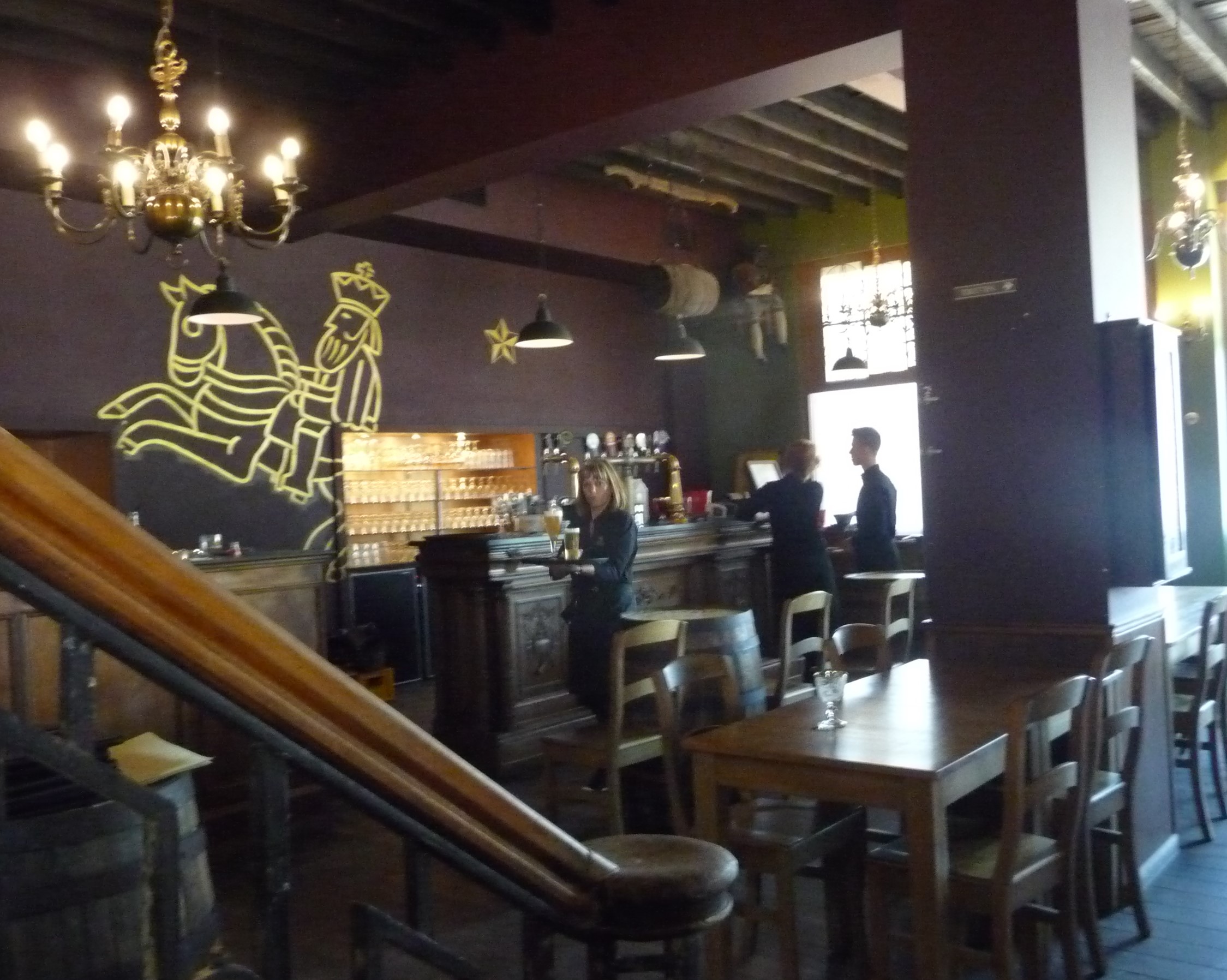 Here I could enjoy a 15 cl draught beer: 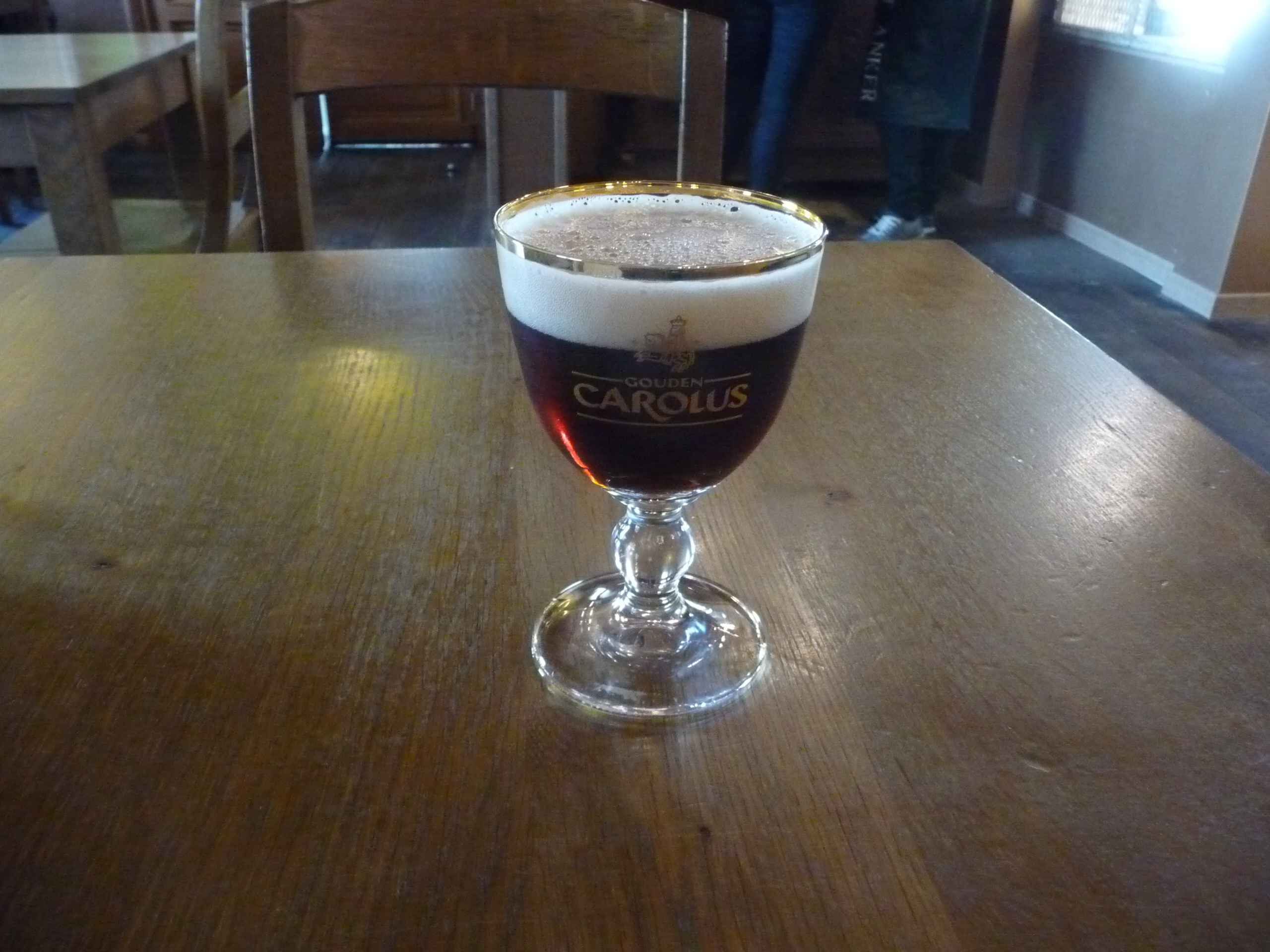 Verdict: I think I had realised by now that for the Mechelen shop-owners, Sense-Sations isn’t that much fun. Here again there was no interest shown in me as a tourist exploring Mechelen for the first time. It was very much “what do you want?” and “here you are.”

So there you are. I had completed the Sense-Sations tour, handed in my six vouchers and received my six free samples of the best of Mechelen’s local specialities.

To be honest, I am none the wiser what I have consumed. No-one explained anything to me, showed any interest in me as a tourist, nor even as a potential buyer of more of their food and drinks.

Now, for 5 EUR you can’t expect a lot – so I have no problem with small portions. What I can’t understand is how no-one interacted with me, even though I could have been a potential customer of more of what I was sampling.

If this had been my first day in Belgium, and was looking forward to learning something about their local food & drink, I would have been disappointed. As it happens, I have lived in this country for 28 years so have grown well accustomed to a poor level of customer service.

You see, there’s nothing unusual or unique about this to Mechelen. It’s a Belgian disease. Customer service levels in shops, cafÃ©s and restaurants generally hover between non-existent and poor. There are notable exceptions of course; places where you are warmly welcomed, appreciated and informed. Once you’ve found such a place, you’ll want to visit it time and again. But generally, customers are given the impression that they are performing a great service to the shopkeeper or cafÃ© owner by being allowed to purchase something from them.

I also find it quite amusing to read in the local press of the winners of “Friendliest Bar Tender” or “Most Customer-Oriented Shopkeeper” awards. I’ve been in some of these places, and notice that these award-winners are extremely friendly to their friends, their regular customers, and the people they know. But to strangers or infrequent visitors, they often give the appearance of being aloof, unfriendly and uninterested.

I would be interested in any comments on this topic.

Oh, by the way, I have a free set of Sense-Sations coupons to give to someone who is interested in doing the tour. Just drop me a line. You might have a different experience to me.

13 thoughts on “The tastes – and customer service – of Mechelen”