The 9 km Ijsewandeling starts from the centre of Huldenberg, behind the Onze-Lieve-Vrouwe church. You can park on the village square. By public transport, the 344 bus travels conveniently from Schumann to Huldenberg. After your walk you can quench your thirst at the Rochus Taverne on the Gemeenteplein.

An interesting stop on this walk is the Sint-Rochus chapel, a quaint little building constructed in 1727 and surrounded by five beautiful lime trees. Saint Rochus, also known as Saint Rock, was a French nobleman, born in 1295 in Montpelier. While on pilgrimage in Italy he encountered an area afflicted with plague. He stayed to minister to the sick, and brought about several miraculous cures by marking plague-stricken patients with the sign of the cross. Even after his death, numerous miraculous cures of the plague were attributed to Rochus, and he was canonized one hundred years later.

In 1976, an ancient custom surrounding Saint Rochus was re-instigated in Huldenberg: the Sint-Rochusommegang or Saint Rochus Procession, during which a picture of the saint is carried around the village. The twenty-first century version has been widened to include a marching band, folk dancers, children’s activities and, inevitably, market stalls. It’s held every three years in the middle of August.

Rochus is not only the patron saint of relief from pestilence, but also of diseased dogs. Therefore, if you have a sick dog you may want to consider bringing it along to join the procession. You may be able to save the vet’s fee!

The route then takes you up to the surrounding farmland, with wonderful views all the way to the church of Duisburg in the distance. Skylarks, linnets and lapwings are present in good numbers; you may hear yellowhammers singing from fence posts (their “little-bit-of-bread-and-no-cheese” ditty); and watch out for partridges as they scurry from the footpath into cover.

When I was there, one large arable field seemed to have a number of large brown stones in it, but looking through my binoculars, the presence of long pointed ears betrayed the presence of hares — eight in all. 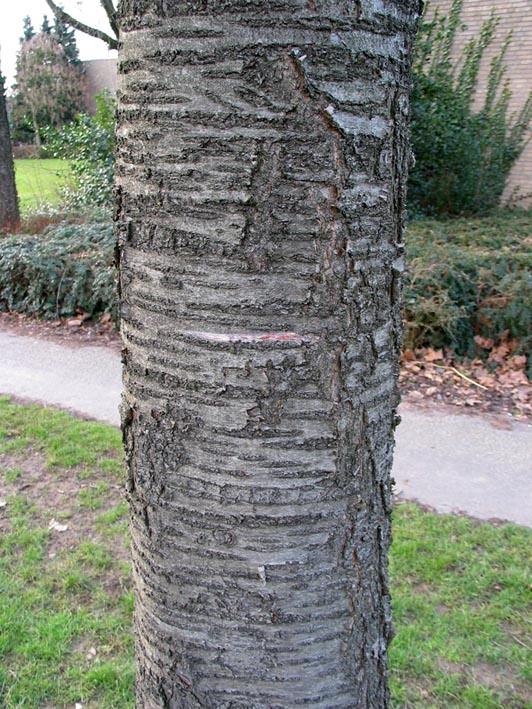 The bark of the sweet cherry is characterized by horizontal stripes

For the kids – The walk takes you through the Margijsbos, a mixed woodland with a superb variety of trees. It’s thus an ideal area to get some bark rubbings. Take a sheet of paper, place it on a tree trunk, and rub a wax crayon over the paper. The wonderful patterns you get will enable you to identify the type of tree. Take a few leaves from the trees too. A good site to help you identify trees is the Dutch Tree Site, which is in English and Dutch, and includes photos of bark.