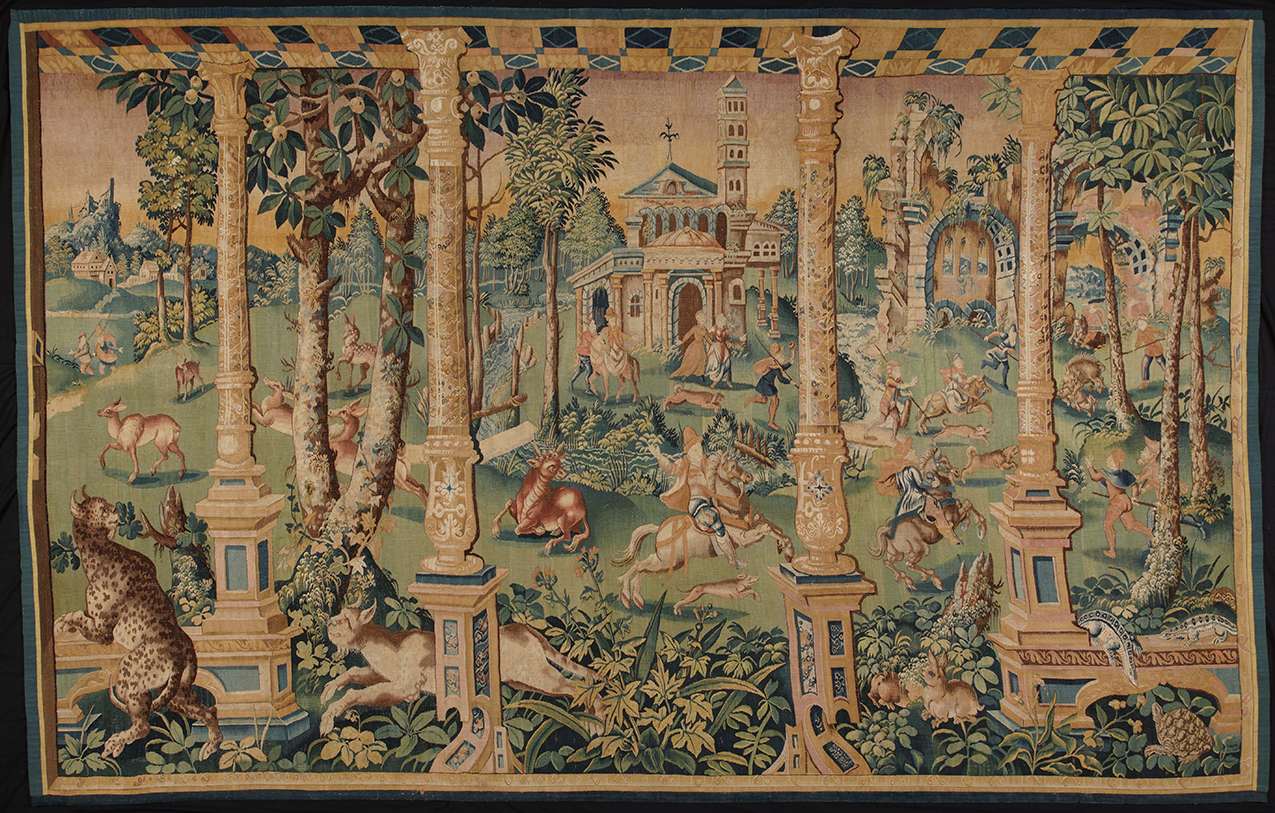 From the early 15th century onwards, Flanders was renowned for its beautiful, huge tapestries. Consisting of sumptuous fabrics of wool, silk, gold and silver thread, they brought to life contemporary events such as decisive battles, as well as stories from the Old Testament, the life of Christ and the saints, romances of chivalry, and ancient myths and legends.

Important Flemish weaving centres such as Brussels, Oudenaarde, Mechelen, Bruges and Doornik worked side-by-side with famous painters such as Rubens, Jordaens and Raphael. Specific tapestry designers such as Bernard van Orley and Michiel Coxcie were constantly in demand.

Flemish tapestries were not just attractive works of art to decorate your castle walls and show off to your friends (and enemies); they also had great practical worth. They afforded much-needed protection against cold and draughts. They were also symbols of power and wealth, due to the expensive material and the labour-intensive production processes. Consequently, only the well-heeled of society could afford to purchase the best tapestries. The finer the collection of tapestries, the higher was the standing of the owner.

When they illustrated sacred stories, tapestries were also suspended between pillars in churches and monasteries. They even appeared in the streets, as festive decorations during ceremonies or inaugurations. Their relative ease of portability meant that they even upholstered the tents of generals during their campaigns. Even here, the primary aim was to make an impression on friend and foe alike.

Moreover, on account of the large quantity of gold and silver thread that was used, Flemish tapestries were an excellent investment. In times of need they could readily be exchanged for hard cash. Fifteenth century inventories listed tapestries as the most expensive objects of art after jewellery. Paintings and sculptures came far lower down the scale.

The Burgundian dukes were the driving force behind the Flemish tapestry industry. From 1380 Philip the Bold commissioned no fewer than ten series of tapestries, with the object of offering them to third parties as expensive state gifts. His collections were later expanded by Philip the Good and the last Burgundian duke, Charles the Bold. The Spanish and Habsburg kings were also fanatical collectors of these spectacular and valuable textiles.

In the late sixteenth century, many of these vast collections passed into the hands of one man, Philip II of Spain. At his death in 1598 his collection amounted to 701 tapestries. Of these, 183 have been preserved in the Royal Palace of Madrid, which now holds 3100 tapestries, most of which originated in Flanders.

The good news is that you don’t have to travel to Madrid to see impressive Flemish tapestries. You just have to make your way to Mechelen, to Tongerlo Abbey. Here you can visit the premises of the Royal Manufacturers De Wit, who own one of the most prestigious private collections of tapestries in the world.

What’s more, you can enjoy a guided tour of this 15th century building, their collection of ancient and modern tapestries, the cleaning process, conservation methods, and a weaving demonstration.

These tours take place on Saturday mornings, and it’s probably a good idea to make contact with the company beforehand just to check availability.

Here are the details of the tour.

8 thoughts on “Tongerlo Abbey, Mechelen: The marvel of Flemish tapestries”