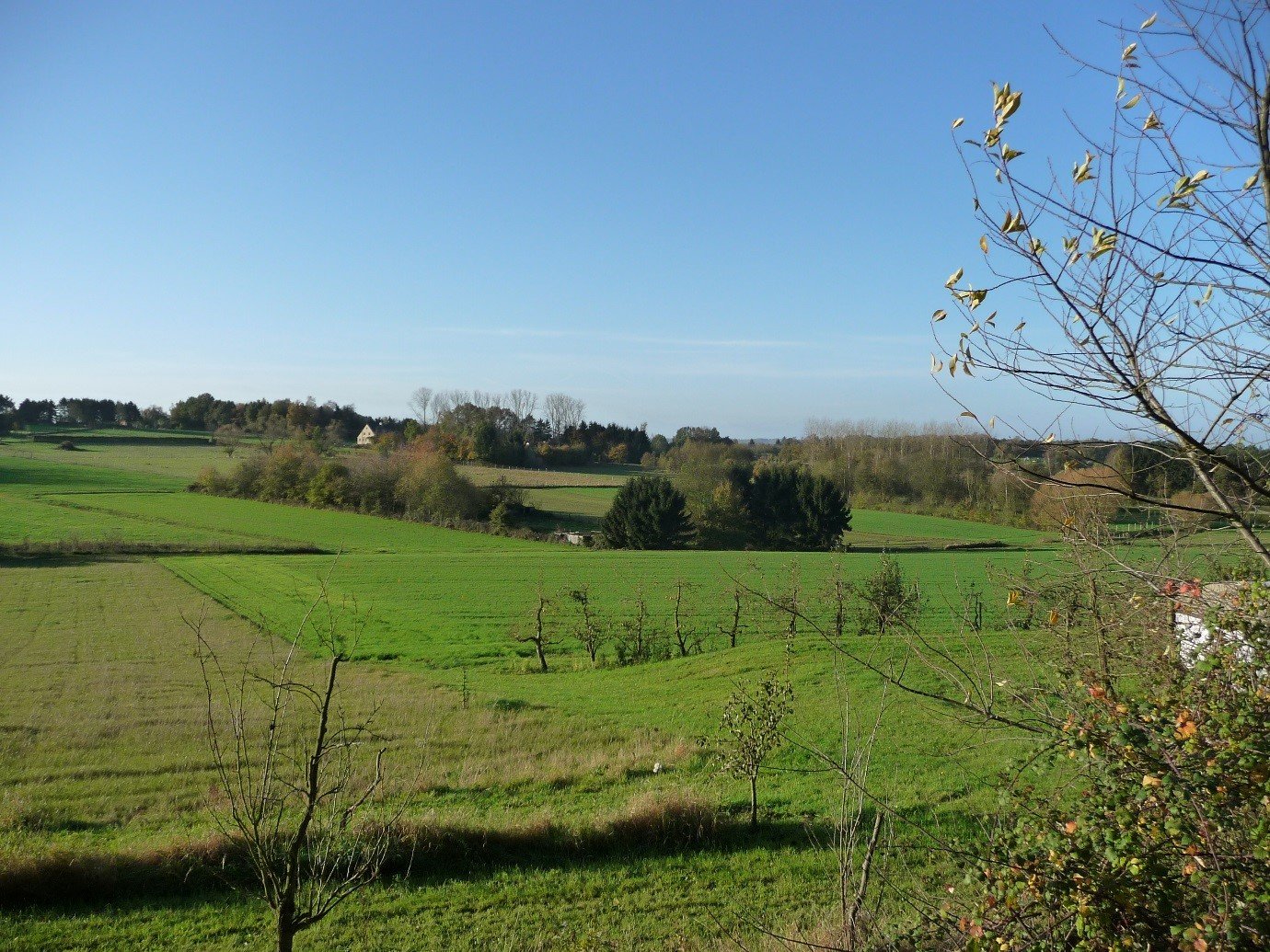 A murdered bishop. A vineyard around every corner. An army of young trees. An idea for a snack in the middle of the night. All come up on these two walks around Nieuwrode, to the east of Leuven in Flemish Brabant.

The starting point for both these Nieuwrode walks – as with so many others – is a church. This time it’s the Sint-Lambertus church in Nieuwrode. Nieuwrode is a small village a few kilometers south of Aarschot and east of Leuven, in the Hageland area of Flemish Brabant.

There’s plenty of car parking space behind the church. By public transport, the nearest railway station is Aarschot, from where you need to take the 310 De Lijn bus to Nieuwrode Pastorie, or the 590 to Nieuwrode Kriesberg. You could also take the train to Leuven and then the 310 bus to Nieuwrode.

Records from 1147 point to a tiny hamlet here called Nurode. A small chapel church was present, saving the faithful a weekly trek to the mother church in neighboring Sint-Pieters-Rode. It wasn’t until the 17th century that it became known as Nieuwrode. A “rode” is nothing to do with “red”. It means a deforested area. If you are adding the place into your GPS, don’t get confused with Nieuwenrode, which is an altogether different “newly deforested area” near Mechelen.

The village used to be famous for its peach orchards, together with nearby Wezemaal and Gelrode. But in the 1970s the number of peach orchards started to decline. Now there are none left. Strawberries were the next big thing in Nieuwrode, but are now a small thing in Nieuwrode. However, what is proving successful in the area is wine. There are a number of thriving vineyards in the region. More of them later.

Saint Lambert … and his church

Your starting point – the church of Saint Lambert – was built between 1870 and 1875 by the Van Arenbergh family of architects from Heverlee. These were profitable times for church architects. Alexander, Louis and Augustijn Van Arenbergh oversaw the design and construction of no fewer than 32 churches in Flemish Brabant. No wonder so many of them look remarkably similar.

And – in modern eyes – ridiculously large for the size of village. Presumably in the 19th century these village churches were packed full for the traditional Saturday evening or Sunday morning eucharist. Or maybe not? Big churches lead to a bigger pay packet for the architects …

Still, the churches will be ready for the Revival! If the Church ever manages to drag its feet into the 21st century, that is. The churches are not going to be full if the Church continues to bless cats, dogs, footballs and shops, but refuses to bless loving relationships between two same-sex adults!

Anyway, we are here to walk, not to whine. So off we go. But not so quick! As we pass Saint Lambert’s Church, it might be worth giving a thought to Saint Lambert himself. We know quite a lot about him, despite the fact that he lived so long ago (636 – 705). He is described as “a prudent young man of pleasing looks, courteous and well-behaved in his speech and manners, well-built, strong, a good fighter, clear-headed, affectionate, pure and humble, and fond of reading.” Amazing, he sounds just like me! Well, the “fond of reading” bit at least.

Lambert grew up to become the Bishop of Maastricht-Liège (Tongeren). However, he’s most famous for his death. The book-loving bishop denounced some important guy’s liaison with his mistress and was murdered for speaking out. So much for apparently being “well-built, strong, and a good fighter!” Perhaps he had his head in a book when he was attacked.

Both walks head east with some glorious views from the Kriesberg over the surrounding fields.

The walks then follow Wijngaardstraat (Vineyard Street), which is aptly named because this area is the center of the Hageland viniculture. It’s a small but growing industry. Vines used to be grown in this area back in the days of the Romans, but 25 or so years ago the industry was given a kick-start after many years in the backwater. The first decent wine was produced in 1997, and since then Hageland wines have won national prizes. A variety of grapes are grown, including Chardonnay, Riesling, Pinot Noir, and Merlot.

If you want to discover more about Hageland wine, your first port of call might be the Hageland Wine Visitor’s Centre in Wezemaal. Here there is a small exhibition on the history of the local wine industry. You can get expert advice on the wines grown in the area. You can even register for a wine-tasting session. Of course, COVID restrictions currently apply but it could be something to bookmark for later.

Chips in the night

If you choose to stretch your legs and go on the longer walk, the next stop is the tiny village of Houwaart. Tiny, but someone’s obviously done a course in marketing. Along the high street you’ll find this automatic 24/7 potato vending machine. It stocks a range of different types of locally grown potatoes in various bag sizes. Such a facility could be incredibly useful. Especially if you wake up hungry in the middle of the night with a deep desire to have a baked spud or fry up a plate of Belgian fries.

And of course … despite it being just down the road from Nieuwrode, the village had to have its own rather large church. More work and income for the Van Arenberghs!

Despite both their enormity and ubiquity, Belgian churches usually seem to be in a good state of health (I’m talking brickwork health, not spiritual health). This is not the case with many rural churches in other countries such as England, for example. These seem to be in a state of disrepair with “save the roof” and “organ repair fund” being an ever-present in the church weekly notices. The difference lies in the fact that the Church of Belgium is state-sponsored, so the country looks after the upkeep of the church fabric, whereas the Church of England is responsible for maintaining its buildings itself. Mind you, the CofE could be a bit short of ready cash soon, as they are facing a multimillion-pound bill to compensate survivors of sexual abuse at the hands of its clergy … (ed. Let’s not go there).

My next destination was Horst Castle, which I have written about elsewhere. The castle lies in the heart of some gorgeous woods, which at any time of the year look beautiful. If you want to go walking in these woods, check out these four walking routes.

The route then led me back to Nieuwrode, with time to sit down meditatively and enjoy the view.

Ah, wait, I was so relaxed, sitting on my bench in the sunshine, that I completely forgot to share with you one final sight of interest.

Around the 152/153 junctions I came across a huge swathe of high poles. Upon getting closer I realized that the poles were supporting young trees. Yes, I had come across an absolutely huge tree nursery. All the trees were labelled. There were oaks, birches, beeches, ashes, maples, poplars, spruces, larches, pines, and a whole load of Latin names I couldn’t translate. Literally thousands of trees were growing. I couldn’t find a name of the company that had planted them. And despite searching on Google I still haven’t found the owner. So if anyone knows, please drop me a line. I’d love to find out more about these trees: how many are here, their final destinations etc.

Choose the route to suit

That title doesn’t work if you pronounce route in the American way (as in shout rather than root) does it? So, you have two options for these Nieuwrode walks: 8 km or 12 km. As you can see from the maps below, you could easily take a few shortcuts if the 8k one is too long for you. Or if you run out of puff and need to get back to the start asap. On the other hand, you could totally break out and take a few long-cuts to extend your walk beyond 12k! Don’t worry about getting lost. It’s virtually impossible with these excellent numbered nodes. Unless you’re so busy looking at churches, castles, vineyards and tree nurseries that you miss the signs!

Here’s the 8k walk. Click on it to enlarge. Download here as a PDF. Get the GPX track for your GPS device from my RouteYou page.

And here’s the 12k route. Click on it to enlarge. Download here as a PDF. Get the GPX track for your GPS device from my RouteYou page.

Let me know how you get on with these Nieuwrode walks, either in the comments below or via my contact page. If you haven’t yet subscribed to Discovering Belgium, now’s your chance:

And if you find this blog useful and want it to keep being useful, this is the only place in the world where a virtual cup of coffee tastes as good as a real cup.