Vilvoorde and its diverse sights 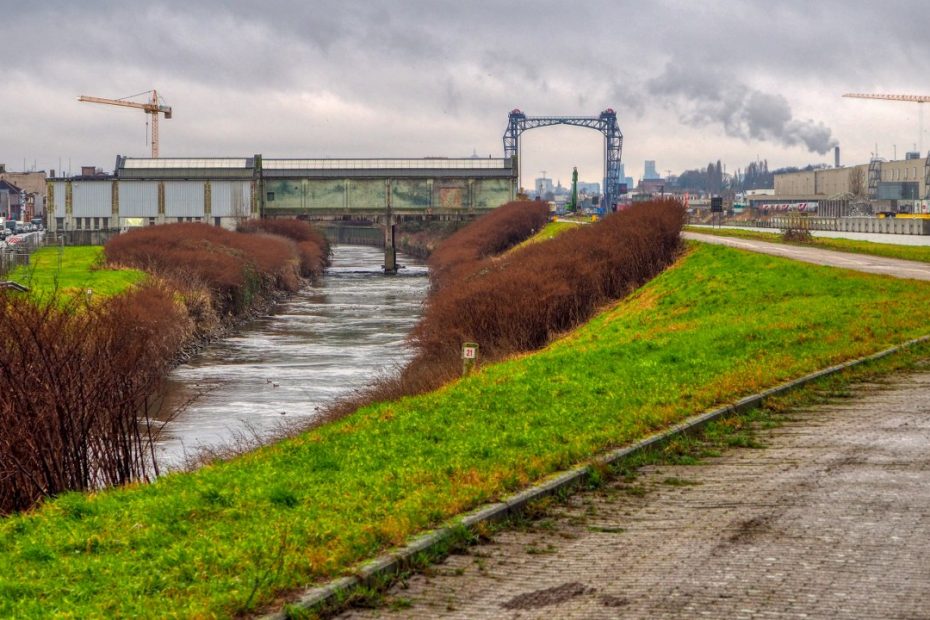 An 11 km mostly urban walk around the town and industrial landscape of Vilvoorde.

The façade of an old school building in Vilvoorde – you’ll meet it later on in this post – is decorated with wise sayings. Most seem to be variations on the theme of “cleanliness is next to godliness” and are clearly aimed at improving the morals of 19th century youth. But here’s a saying that would look very much at home there:

“Sameness is the mother of disgust, variety the cure”

Feeling the need to exchange sameness with a bit of variety in my blog posts, I decided to do a different kind of walk to what you normally see on Discovering Belgium. So, gone are the open vistas with scarcely a mechanical object in sight. You won’t be enjoying views of landscapes unsullied by man-made structures such as noisy motorways or electricity pylons. Instead of birds, flowers and fresh air, this walk is full to the brim with vehicles, bridges, factories, cranes, roads, flyovers. With demolition and reconstruction. Industrialization and urbanization. In other words, for this walk I turned away from the countryside and headed to Vilvoorde, an industrial town on the north-eastern edge of Brussels.

Located in Flemish Brabant, Vilvoorde is officially Dutch-speaking, although you are not always aware of that on its streets. Early on the walk I was accosted by a friendly drunk Francophone. We didn’t get very far with our conversation. My understanding of spoken French is limited; even more so when it’s being slurred under the influence of multiple Jupilers (the cans littered the ground below the wall he was sprawling on). Later I discover that around a third of the population of Vilvoorde is Francophone. There’s also a large Spanish population, descendants from Spaniards who came here after the end of the Second World War. Vilvoorde also has quite large Moroccan and Turkish communities too. A microcosm of Belgium.

Historically, the town grew up around the important River Zenne. In the 14th century, thanks to its position on the river, Vilvoorde became a key commercial and military center. It could hold its head up high against Leuven and Brussels for the title of most important city in Brabant.

Alas, with the decline of the textile industry, Vilvoorde’s importance waned too. Until, that is, the early 19th century and the Industrial Revolution. Here the key to the revitalization of Vilvoorde was not the river but the Brussels–Scheldt Maritime Canal. It was already in existence, but in the 1830s it was deepened to allow access for bigger vessels. Around the same time the canal, and thus Vilvoorde, was connected to the burgeoning Belgian railway network as well as to the Brussels-Charleroi Canal. Suddenly Vilvoorde was in the center of commerce, between the coal mines of Wallonia and the port of Antwerp. All these changes were the catalyst that led to Vilvoorde becoming one of the largest industrial areas around Brussels.

This 11 km circular walk starts from the (free!) Zenne Car Park of the Jan Portaels Hospital  in Sint-Jozefstraat. By public transport you need to get off the bus (225 or 287, De Lijn) at Vilvoorde Kliniek. The car park/start point is only meters away. You can download the GPX track for your device from my RouteYou page.

I thoroughly enjoyed the walk – and was inspired by the different kind of photography it stimulated. There is a lot to see on the route. I’ve broken down the points of interest into topics. Ready to go? Oh, don’t be disturbed by the first 500 meters or so. Yes, the route takes you alongside a deserted warehouse and then over derelict wasteground. You’ll probably be wondering where on earth I am taking you. But remember:

“Variety is the very spice of life, that gives it all its flavor”

The waterways of Vilvoorde

Throughout the route, you won’t be far from either the River Zenne or the Brussels-Scheldt Canal. Sometimes you’ll be walking between them.

The bridges of Vilvoorde

Not surprisingly, with all these waterways, there are plenty of bridges to cross along the way.

Vilvoorde has a lot of interesting architecture to admire, particularly in the center of town. This route doesn’t hit those areas but there are still some handsome buildings on the way.

Particularly along the canal on the southernmost leg of the route, there’s a lot of reconstruction taking place. Old buildings are being demolished, new apartments and office blocks rising.

Not to everyone’s taste

The inhabitants of Vilvoorde are known as “pjeirefretters”, which means horse-eaters. The town has a long history for breeding horses, and horse steak remains a town speciality.

Vilvoorde isn’t all industry and urbanization. There’s a lovely park, the Drie Fonteinen. Here you can relax, enjoy a coffee or lunch in the Brasserie De Drie Fonteinen, or sit in the grounds with your picnic. There’s even a couple of picnic tables under cover. In short, take your time … there’s plenty to see and do here …

So that’s a brief introduction to Vilvoorde. And yes, I couldn’t resist a spot of greenery at the end could I? There is more to see in the town center; I will visit that area one day too. I hope you enjoyed this walk and will consider walking the route yourself. Let me know if you have any questions. I enjoyed myself so will be doing more of these urban walks in the future. If you want to get future posts directly in your inbox, add your email below:

18 thoughts on “Vilvoorde and its diverse sights”