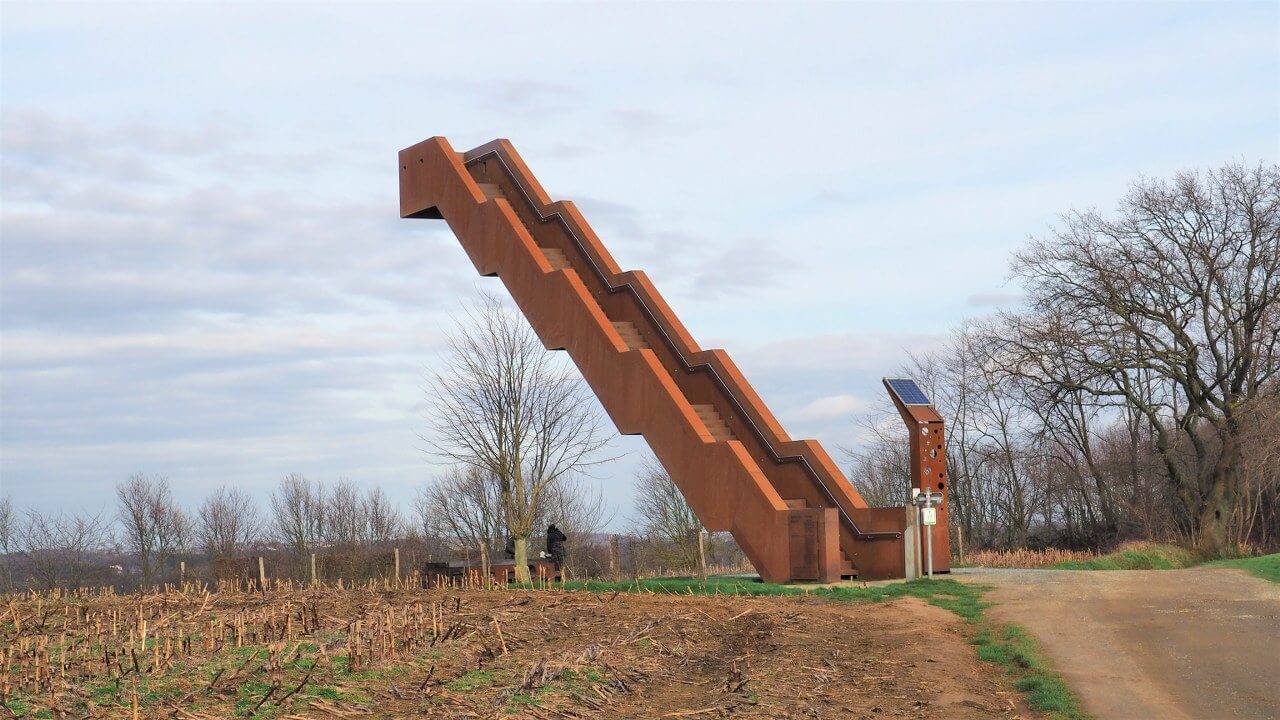 The Vlooyberg Tower near Tielt-Winge is a curiosity well worth a visit. Interesting for kids too!

If I’ve learned anything from my 32 years in Belgium, it’s this. Just around the corner is ALWAYS something unexpected. I’ll be quietly walking along a country lane, minding my own business, forgetting my worries, even daydreaming a little, when I turn a corner and see this:

What is it, I wonder? A rocket launch site? The first aircraft stairs ever built? A prototype escalator? A staircase to a building that has been demolished? A religious shrine? A mini bungee jump? A stairway to heaven?

None of those. It’s a piece of Belgian landscape architecture, the uniqueness of which is comparable to the Reading Between The Lines church that I visited recently.

It’s called the Vlooyberg Tower and was built in 2013.

A hybrid between a tower and a staircase, it stands over 11 meters high and extends over 20 meters.

Or should I say “floats”, because it doesn’t have any vertical struts or supports. And this despite it weighing no less than 13 tons.

The structure is constructed of galvanized steel in the same typical red-brown color of the ironstone in the surrounding Hageland region.

It was constructed to replace a wooden observation tower that was on the same location. Unfortunately, the wooden tower was a frequent target for local vandals who seemed to take pleasure in burning it down. So a more permanent vandal-proof structure was designed and installed.

It is built by engineering architects Close to Bone. It won them a 2014 Steel Construction competition. The jury described the structure as

“A project full of tension, full of fantasy, full of absurdity. It has a function, but maybe not. A ‘stairway to heaven’ with an almost Magritte quality: Ceci n’est pas un escalier.”

Alas, the new, supposedly vandal-resistant structure merely upped the ante among the local sickos. In the early hours of 30th June 2018 a loud explosion woke up the residents of the local village of Tielt-Winge. As dawn broke the extent of the damage became visible:

It appeared that at least two people had gone to the trouble of lugging bales of straw and jerrycans of petrol over the fields to the structure. Then they struck a match and scarpered. Apart from one of them, who was clearly putting himself forward as a candidate for the Darwin Awards. Apparently forgetting to drop the match or scarper quickly enough, he ended up with severe burns to his arms and face.

The Vlooyberg Tower rises from the ashes

Understandably angry, but not to be deterred, the local mayor committed to a rapid reconstruction program. In December 2018 the repaired Vlooyberg Tower re-opened.

So the tower is now as good as new and ready to visit.

You can climb to the top, from where you get great views over the surrounding countryside.

When I was there, Storm Ciara was just beginning to gain in strength. I could feel the structure very gently swaying (and creaking!) in the wind. But despite the gathering storm, the tower still felt very solid and safe. I guess it must be very well anchored into the ground.

How to visit the Vlooyberg Tower

To pay a visit to the tower, drive to Oudepastoriestraat 22, 3390 Tielt-Winge. Here you can park. You should then head off on the footpath to the left of Huize Hageland towards hiking node no. 204. After a few minutes you’ll see the Vlooyberg Tower in front of you.

It’s also on some cycle routes so it’s also easy to access via bike. For example, you could take a train to Leuven and hire a bike from the railway station for a day. Here is a plan for a 45 km circular cycle ride to the Vlooyberg Tower and back to Leuven, for example:

There are a couple of benches under the tower so it’s an ideal place to stop and have a picnic.

Children will probably enjoy climbing the steps, and there’s a high enough sill at the top so they can’t fall over the rim.

The whole area is a good walking area. In a forthcoming post I will describe a circular walk around the area. In the meantime, enjoy your visit to the Vlooyberg Tower!

26 thoughts on “Visit the Vlooyberg Tower”