A 23 km hike around Viroinval 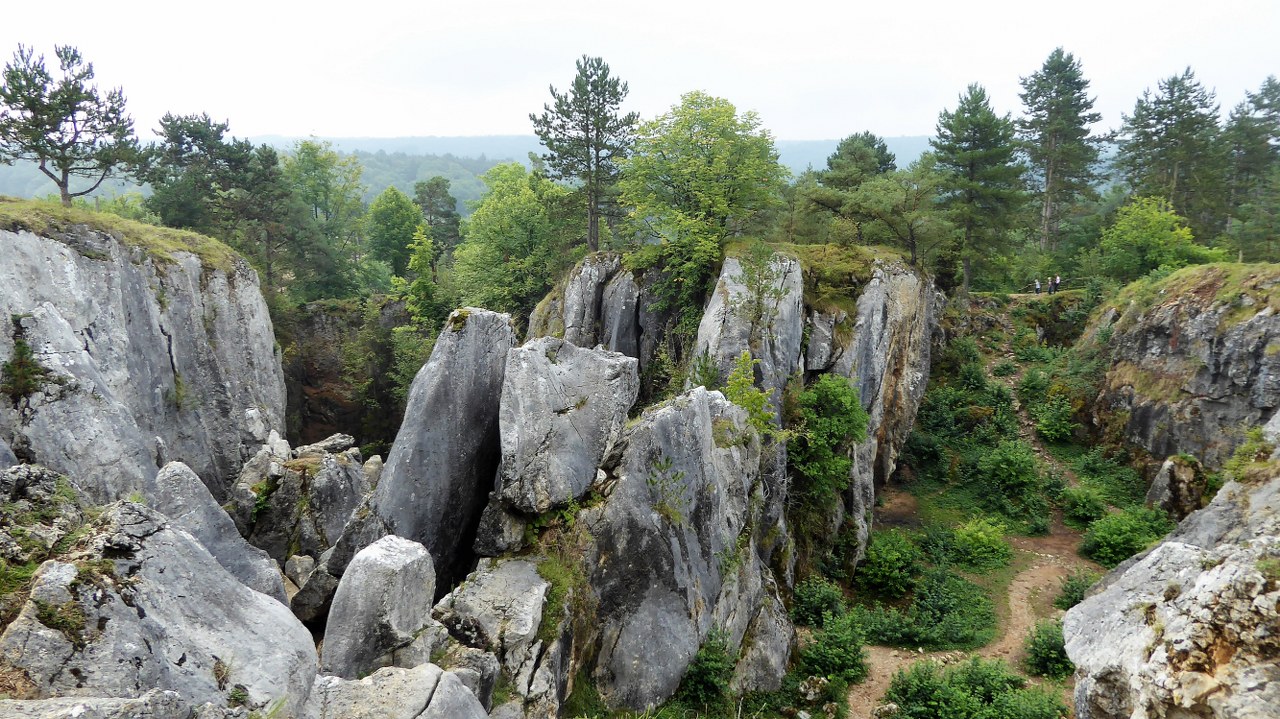 A lovely and varied walk in Wallonia, with plenty to see. I recommend this hike around Viroinval for a day or weekend!

Setting off early for my long weekend away in the Ardennes, I was in the village of Nismes by 9.30 a.m. This is one of the eight villages that form the municipality of Viroinval.

The village was deserted, so I parked the car by the tiny tourist office, assuming it would be a perfectly safe location. (It was the worst place I could have possibly chosen; but more of that disaster later!). I had already selected a 24 km route for my hike around Viroinval. The map of the route is shown below. You can download the map as a PDF. And you can get the GPX route from my RouteYou page.

I found the starting point on Rue Grande and set off. I didn’t have far to walk before my first eyebrow-raising experience.

This astounding natural gorge has been formed over millions of years by rainfall erosion on limestone rocks. It’s decorated with giant boulders, and the abyss apparently has a depth of 20 meters. You can see from the surrounding trees how big it is. Not exactly Grand Canyon size, but pretty remarkable nevertheless.

The surrounding chalk grassland is well-known for its rare and delicate flora that has developed in what is called a natural microcosm. Spring is the best time to go flower spotting here, so I may well come back next April/May.

While you are at Le Fondry des Chiens, take some time to sit and enjoy the landscape. Please be careful though as nasty accidents have happened here, especially amongst younger folk seeking the best selfie.

Next up is this rocky outcrop that gives you a super view over the surrounding countryside.

As you can see, it’s a very wooded area, and the path goes through some lovely forests. As the song goes – “If you go down to the woods today, you’re sure of a big surprise” …

Don’t get too close to the edge! There is a warning board for climbers, but no fencing, and it’s a big drop down!

After all that excitement, it’s time to meander back down to civilization and the pretty little village of …

As you’ve guessed, the river is the Viroin:

This really is a picturesque walk, because the next port of call has made the list of the Prettiest Villages in Wallonia …

By now I was on the homeward stretch, which went through some deeply mysterious forests:

… and some more interesting rock formations to round off a wonderful day:

Heading back towards Nismes at 5.30 p.m., feeling pretty exhausted after my hike around Viroinval and walking 24 km, the sound of music reached my ears. Entering the village, it was clear that a summer market was in full swing. Scores of stalls were selling everything from local produce to clothes to second-hand books. And I became aware as I walked through the streets that they had all been made pedestrian-only.

Would I be able to drive my car out of the village?

The answer was a resounding NO. I found my car by the tourist office. But a huge stall selling racks and racks of women’s clothes had been set up in front of it. My car was totally imprisoned!

I spoke to the stall-owner. He explained that everyone in the village was fully aware that all cars had to be removed from the village centre before noon, to enable the stalls to be set up. And that he was unable to move his racks of clothes.

“So when does the market finish?” I asked him.

“Midnight, and we will have finished packing up by 1 a.m., when you can pick up your car.”

I had booked up a local B&B for the night. However, it wasn’t in Nismes but the next village of Dourbes – five kilometers away!

There was no option but to get my weekend bag out of the car, and walk another 5 km!

I made it, and found the B&B that I had booked.

Les Gabelous is an excellent B&B. I would rate it as good as any B&B I have ever stayed in. The hosts, Fabienne and Ben, were extremely friendly. The facilities were top-class. And the food (evening meal, breakfast and packed lunch) was tasty, wholesome, abundant and good value for money. What’s more, the host gave me a lift back into Nismes in the morning, so I didn’t have to retrace my steps!

So all in all, despite the kerfuffle with the car, it was an excellent hike around Viroinval. Stay tuned for the next stage.

ALSO WORTH VISITING NEAR NISMES

Also, check out this video from Dieter The Photographer:

Or enjoy some beautiful classical music played by Discovering Belgium contributor Herman Vandecauter who packed his ukulele into his rucksack to play it alongside Le Fondry des Chiens: