Walking from Tervuren to Bertem

This walk from Tervuren to Bertem is ideal for anyone interested in a bit of exercise and fresh air. But it might be of particular interest for Brussels residents wanting to escape the city for a while.

Another group of people who might be interested in this walk are residents of Tervuren who want a change from walking around Tervuren Park. You’ll be able to stretch your legs by walking somewhere different, and maybe get a few surprises along the way.

Actually the walk is ideal for people living in Brussels who don’t have a car. Simply take tram 44 from Montgomery to Tervuren Station. Turn right, past the Bandundu Water Jazz Band on the roundabout:

and head down to the Tervuren market square.

If you live in Leuven, there are plenty of buses to Tervuren. Or you can park your car in the underground Moestuin parking for 4 EUR a day Monday to Saturday, or 2 EUR on Sunday.

From the market square, make your way to the start of the park by the first lake. There used to be a cozy café here where you could drop in for a coffee and a sandwich after a stroll around the lakes. Then it was upgraded to a rather posh place called Bistro Mille with an upmarket menu at upmarket prices. I wasn’t surprised when it closed down. The last time I passed by it was empty. Bring back the cosy café!

Anyway, instead of following the crowd along the big lake, turn right and find your first numbered “knooppunt”:

If you’re unfamiliar with these signposts, they make up a wonderful network of footpaths through much of Flanders. You go from post to post, following the directions indicated. For example, on this walk you start from post no. 4 (topmost photo). In this photo you can see that the next post, which is indicated as straight on, is post no. 41 (next photo). As you walk along you see more posts like this one, right pointing you in the direction of post no. 41.

Keep a sharp eye out for the signposts (delegate to the kids?) and you won’t get lost (if you do, don’t blame me!).

As you can see, you start from Tervuren at post no. 4 marked with the green flag bottom left, and follow the blue route to Bertem at the top right. You will also see the great advantage of this network, which is that you can work out your own unique path to follow, to match the time available and your energy levels.

A Bit of History

Tervuren is named after its river, the Voer (“ter Vure” means “on the Voer”). At the end of the 12th century, Hendrik I, Duke of Brabant, built a castle in Tervuren. You can see what it used to be like from the information board:

and you can just about make out a few remains by the lake’s edge:

In the 18th century, most of the castle was demolished – but two bits were left standing. One is the Hoefijzer (horseshoe), now used as a military barracks:

The other building that survived the demolition is the Saint Hubertus Chapel:

Hubertus (born 656) was the son of the Duke of Aquitaine and was addicted to hunting. One Good Friday he was chasing a magnificent stag in the Belgian Ardennes when the stag turned and Hubertus saw a crucifix between its antlers. At the same time he heard a voice saying “Hubertus, unless you turn to the Lord and lead a holy life you will go to hell.”

Well, he wasn’t going to argue with that, was he? So he immediately gave his wealth to the poor, studied for the priesthood, and later became Bishop of Liège. It is believed his heart is buried in Tervuren. Here’s the little fella: 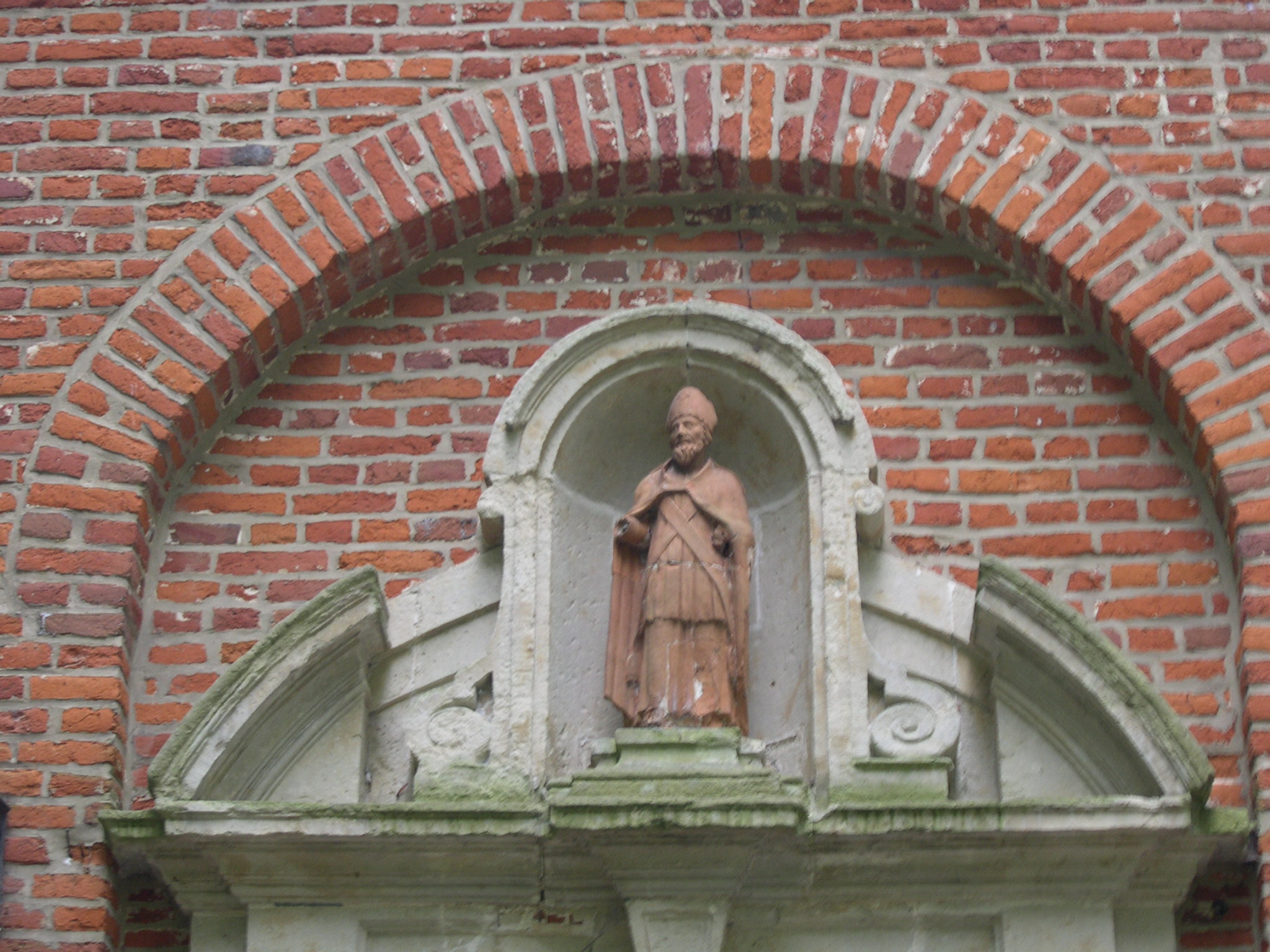 On the last Sunday of October the annual Saint Hubertus ceremony is held at this chapel, when local people bring their pet animals to be blessed. Children might especially like to attend. It’s quite an extensive and well-attended event, as you can see from this video of the 2014 ceremony.

(As an aside, I must admit I have problems with any Church, whether Catholic or Protestant, that is happy to bless horses, dogs and cats, but won’t bless two people of the same sex who love each other and are deeply committed to each other. But don’t let my little rant put you off your enjoyment of the Saint Hubertus event).

After bidding Hubertus goodbye, continue through the woods until you come to these:

It could be, couldn’t it! The Belgian King Leopold II (1835 – 1909) may have thought so. He paid a local farmer the kingly sum of 150 Belgian francs (3.75 EUR) to have it brought to Tervuren Park (now his own park) as decoration. There is a suggestion that it’s a fragmented meteorite. Or something dating back to the druids. I haven’t seen any final conclusion. If you have, let me know.

Ready for another rant? Any mention of King Leopold II gets my blood boiling. Want to know why? Read this previous blog post of mine about King Leopold II and we’ll get angry together.

Where the stones are located is called the Zevenster. It’s where a number of straight forest avenues intersect. The huntsmen used to position themselves at the Zevenster while the beaters drove game into the avenues, sector by sector. These panoramic views give a rather distorted view of the concept:

The woodland you are walking in is part of the Sonian Forest, which covers more than 43 square kilometres, although that’s nothing compared to its original size. 80% of the trees are beech.

By this time you will have arrived at the end of Tervuren Park, and can sit on a bench and enjoy the view of Vossem Lake:

This is where you Tervurenaars will be sorely tempted to follow your customary route and circle around the lake and back to a café. But don’t! It’s time to leave the familiar behind and explore the unfamiliar. At post 43, leave the park by the brick gateway and turn immediately right in the direction of post 44. This takes you along the side of the park, which is hemmed in by a long brick wall:

Continue and you will steadily climb up until you reach open countryside:

You can now spend a few hours in the heart of the lovely Plateau of Duisburg which stretches from Tervuren to Bertem and south to Huldenberg. It’s a rich agricultural region built on a type of clay fairly unique to this area.

The amazing thing is that you are only about 10-15 km away from the centre of Brussels, and about 8 km from the centre of Leuven. Yet you will feel as if you are much further away from civilization. There are no villages, no roads and only a few isolated farmhouses. But there is plenty of fresh air and solitude. In other words, it’s highly recommended for you Brusselaars and Tervurenaars (and anyone else of course) to get away from it all for a few hours.

And that’s our objective, isn’t it!

“But how do I get back to where I started?”

By bus. Entering Bertem, you will be following the signs to post 55. However, when you see this signpost directing you to go left, go straight on:

Carry straight on and turn left at the Delhaize supermarket at this junction:

And there on the opposite side of the road is the Bertem Oud Station bus stop.

Of course, you need a bus ticket, but it’s a doddle to get one. Just send the text message DL to 4884 and you will get a return SMS; that’s your bus ticket. Then catch the next 317 bus back to Tervuren where you can return to the tram station or pick up your car. (You’ll have to show your phone with the SMS message to the driver).

So there you are: in my view an excellent excursion to shake off the city dust and enjoy some fresh air and Flemish countryside.

For you techies who consider a list of numbers or a printed map too Last Century, here is the route on RouteYou where you can download the GPX track for your GPS device.

Of course, from Bertem you could always walk back to Tervuren by following the map above and the signposts. This is also a lovely walk that goes alongside the River Voer.

But if you’re going home on the bus and fancy a good read about the countryside, I can thoroughly recommend Meadowland by John Lewis-Stempel.

To keep up-to-date with walks in Belgium (plus other interesting activities), just drop your email below and you’ll get new blog posts in your inbox.

42 thoughts on “Walking from Tervuren to Bertem”