Walking the Battlefield of Waterloo 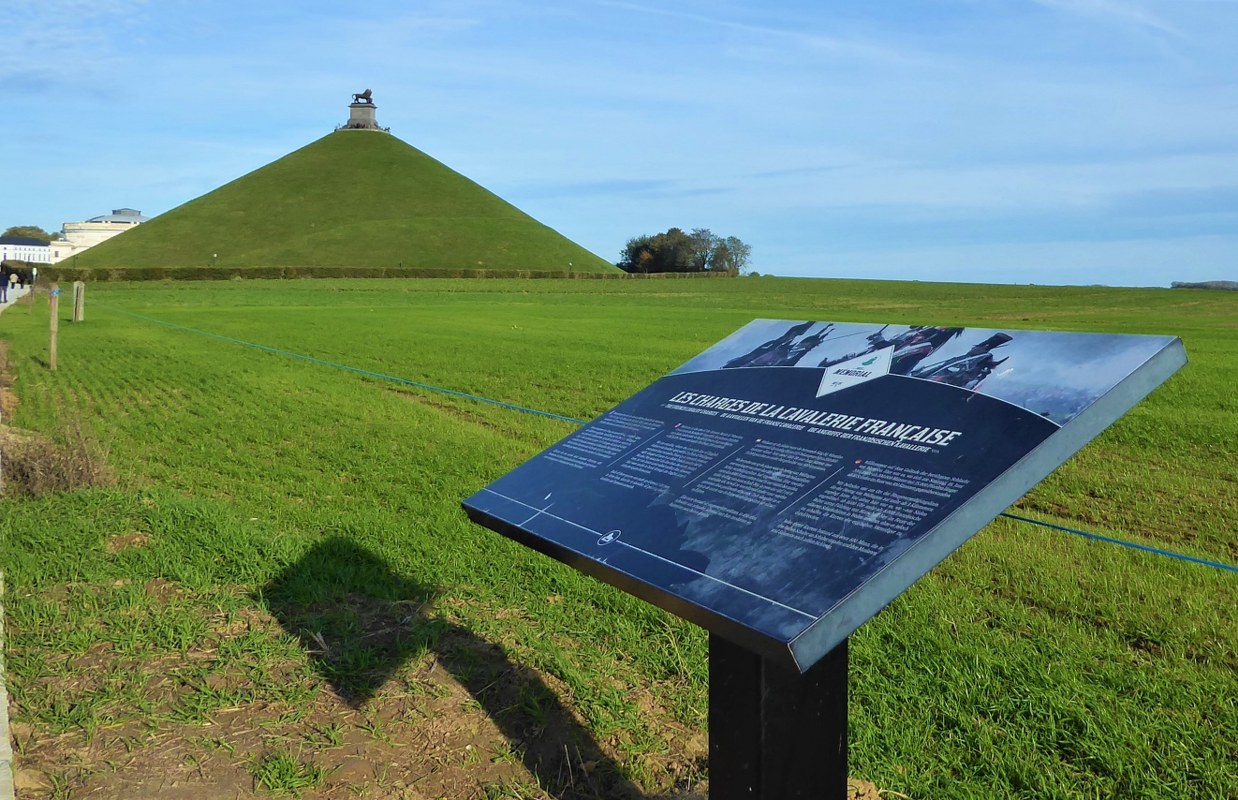 First, below is a map of the walk of the battlefield of Waterloo that I’ve put together. You can also download it so you can print it out and carry it around with you by clicking Waterloo Battlefield Map.

The walk starts from the car park next to the Lion’s Mound (Butte de Lion). As you can see from the map, it’s possible to shorten the route by taking one of the obvious short-cuts, for example from J or K. To download the route to your GPS device, you can go to my RouteYou page.

By public transport: From Brussels, get to the railway station of Braine-L’Alleud (so not Waterloo) by catching a train from Brussels Midi/Centraal in the direction of Charleroi. From Braine l’Alleud station take the bus LIGNE W to the Route du Lion stop (5 minutes — 1.80 â‚¬).

Note: This is a walking tour of the battlefield of Waterloo. It covers some of the farms and buildings that played a key role in the battle, as well as some monuments and memorials erected afterwards. It does not describe the main museums, which I will cover in a later post, and which involve payment.

So, armed and prepared, let’s set off. I was lucky to have a beautiful sunny day. I hope you are equally fortunate.

You won’t miss the first point of interest.

A. THE LION’S MOUND

This is world famous and dedicated to those who died in the Battle of Waterloo. The mound of earth is 40 metres high, and 28 tons of cast iron were required to build the lion on top, which was made by the John Cockerill foundries at Seraing.

Its construction was ordered by King William I of the Netherlands in 1820, and it was completed in 1826. It is located at the spot where William II of Netherlands, the Prince of Orange, was wounded. The lion is the heraldic beast on the coat of arms of the monarch of the Netherlands, and symbolizes courage. At the top of the 226 steps you can have a splendid view of the Battle site. (You have to pay to climb the Lion’s Mount: more on that in a later post).

Keeping the Lion’s Mound on your right, follow the Route du Lion.

This was the very first monument to be erected on the battlefield, in 1817, by his family, in memory of Lieutenant Colonel Gordon. He was 29 years old and an aide-de-camp to Wellington when he was fatally injured during the battle.

C. MEMORIAL TO THE BELGIANS

Out of the 4200 Belgians who fought in the Battle of Waterloo, 1200 of them perished on the battlefield. Whose side did they fight on? The winning side – and the losing side! Yes, Belgium was not yet an independent country, and locals fought on both sides during the battle. This memorial, by the architect Callewaerts, commemorates these Belgian soldiers killed on 18th June 1815.

Who were the Hanoverians? Also known as the King’s German League, the Hanoverian regiment was a major British unit that was raised on the order of King George III. It consisted mainly of officers and troops from the Electorate of Brunswick-LÃ¼neburg-Hanover which had been ruled by the King of Great Britain since 1714. The unit fought on several fronts during the Napoleonic Wars, including in Waterloo in 1815, where under the command of the Duke of Wellington it defended La Haye Sainte farm. It lost 4,000 soldiers at Waterloo. The memorial was erected in 1818.

During the battle of Waterloo this farm constituted the central defensive unit of the three bases of Wellington’s army along with the Hougoumont and La Papelotte farms. It was the key to Wellington’s position; the gateway which would give the French army access to the road to Brussels. It was defended by about 400 German and British troops but they were hopelessly outnumbered by attacking French troops. Eventually their ammunition ran out and they retreated, leaving the farm in French hands. But by this time (around 6.30 pm) BlÃ¼cher and the Prussian army had arrived on the battlefield and the outnumbered French army was defeated. It is generally believed that had La Haye Sainte been over-run earlier in the day, Napoleon would have been able to attack the allied centre and defeat Wellington.

Inscription: “In memory of the heroic stand by the 27th (Inniskilling) Regiment of Foot at the Battle of Waterloo on 18th June 1815 when, of the 747 officers and men of the regiment who joined battle, 493 were killed or wounded. A noble record of stubborn endurance. Of them the Duke of Wellington said, ‘Ah they saved the centre of my line’. Erected by their successors The Royal Irish Rangers (27th (Inniskillings) 83rd, 87th). 18 June 1990.”

Monument in memory of the 21st French Line Infantry Regiment of the Marcognet Division.

This played no part in the battle as it didn’t exist then. It wasn’t built until after the First World War, when it was decided to create the Dominican Monastery of Fichermont. I’ve included it here because one of the monastery’s objectives was to pray for peace and for the victims of deadly conflicts, including those who fell in Waterloo on 18 June 1815. It is now the Musica Mundi School.

The monastery’s most well-known inhabitant was “The Singing Nun”, whose song “Dominique” became a pop hit in 1962. Her story is so interesting I’m going to devote a separate blog post to her. (Which you can now read: The Singing Nun!).

Continue along rue du Dimont and then turn right down Chemin des Catamouriaux.

La Papelotte was an important military base on the left flank of Wellington’s troops. It was defended by two Nassau regiments (German soldiers originating from the Duchy of Nassau that were integrated into the Dutch army). French troops under command of Durutte were almost able to conquer the farm, but were chased away by Prussians led by Ziethen. Even so, the farm was partially burnt down during the battle. It was rebuilt in 1860 and now houses a pony club.

Turn left after La Papelotte down Rue Babeau and then right along Chemin de Plancenoit.

The arrival of the Prussians on the battlefield in the afternoon was a determining factor to the outcome. Erected in 1819 in the old village of Plancenoit, this memorial is dedicated to the 6,700 Prussian soldiers who died on the battlefield. It was designed by the most famous German architect of the 19th century, Schinkel. On the top is the familiar Iron Cross.

In the afternoon of 15 June 1815, this church square was the scene of bloody battles between the French and Prussians. Napoleon had to preserve this village at all costs to prevent him being surrounded. The Prussians attacked the village but were driven back twice. But eventually towards the end of the day the village fell into their hands leaving Napoleon no choice but to flee.

From Plancenoit the route follows Rue du Mouton and then Sentiers des Flamandes into the woods and out again to follow Sentier de Chantelleux.

Marshal Ney, commanding the French cavalry, established his headquarters here and spent the eve of the battle at the farm. It was at the centre of the Franco-Prussian clashes on the 17th and 18th of June 1815. The farm features a pretty baroque chapel built from red bricks and limestone (below).7

Napoleon and his staff spent the night of 17 June 1815 here to draw up his battle plans. It now houses Belgium’s largest Napoleonic museum, with collections of various items belonging to or used by Napoleon. It includes the table on which he dined and rolled his Waterloo maps out, along with weaponry, uniforms, medals, maps, letters and coins.

At the museum, turn right along Rue du Vieux Manand. The footpath continues through the woods and fields and comes out on Avenue de Fontainebleau.

Before the battle commenced, Napoleon inspected his troops at this farm. Towards the end of the battle, Napoleon oversaw the battle from here. Hoping to change the outcome of the battle with a last push, Napoleon ordered his guard to attack Wellington’s right flank from this location. The effort failed. Later that night, when the French were defeated and on the run, the two great allied army commanders Wellington and BlÃ¼cher met at this farm.

However, the Belle Alliance does NOT take its name from this historic meeting of the two victors of Waterloo. The name was given to it after the wedding of the owner to her farm servant!

To see the next two points of interest more closely, you’ll have to take a short walk down the N5.

This memorial was erected in 1911-1912 to celebrate the 50th anniversary of Victor Hugo’s visit to Waterloo, which he wrote about in Les MisÃ©rables and Les ChÃ¢tements. For an excellent overview of Victor Hugo’s writings on Waterloo and Napoleon, read this article by Andrew Uffindell, a leading expert on the Napoleonic era.

The French Wounded Eagle Monument stands at the place where the last remnants of the Imperial Guard led a final, futile stand against the Allies. It is the work of the French painter and sculptor Jean-LÃ©on GÃ©rÃ´me. The eagle symbol was chosen by Napoleon who demanded it be put at the top of all the Napoleonic army’s flags.

One of the three farms along with La Haye Sainte and Papelotte that witnessed some of the most fierce and deadly fighting. Hougoumont Farm was located in a forward position that protected the Allies’ right flank, and was where Napoleon’s brother sparked off the battle. What was only supposed to be a diversionary manoeuvre at first, became the most violent point of the battle. Throughout the day, the French assaults here were furious but in vain. The main building was burned to the ground. The house we see today is in fact the former gardener’s cottage.

You now follow the road back to the Lion’s Mound and where you started from.

MORE TO COME ON THE BATTLE OF WATERLOO

I’m quite embarrassed to say that after 35 years in Belgium, and 8 years blogging about discovering it, this is my first serious foray into Waterloo. Walking the battlefield has captured my interest, so expect more posts on Waterloo in the near future …

If you want to get new posts delivered to your inbox, just add your email below:

Or if you are already registered with WordPress, just click below:

27 thoughts on “Walking the Battlefield of Waterloo”