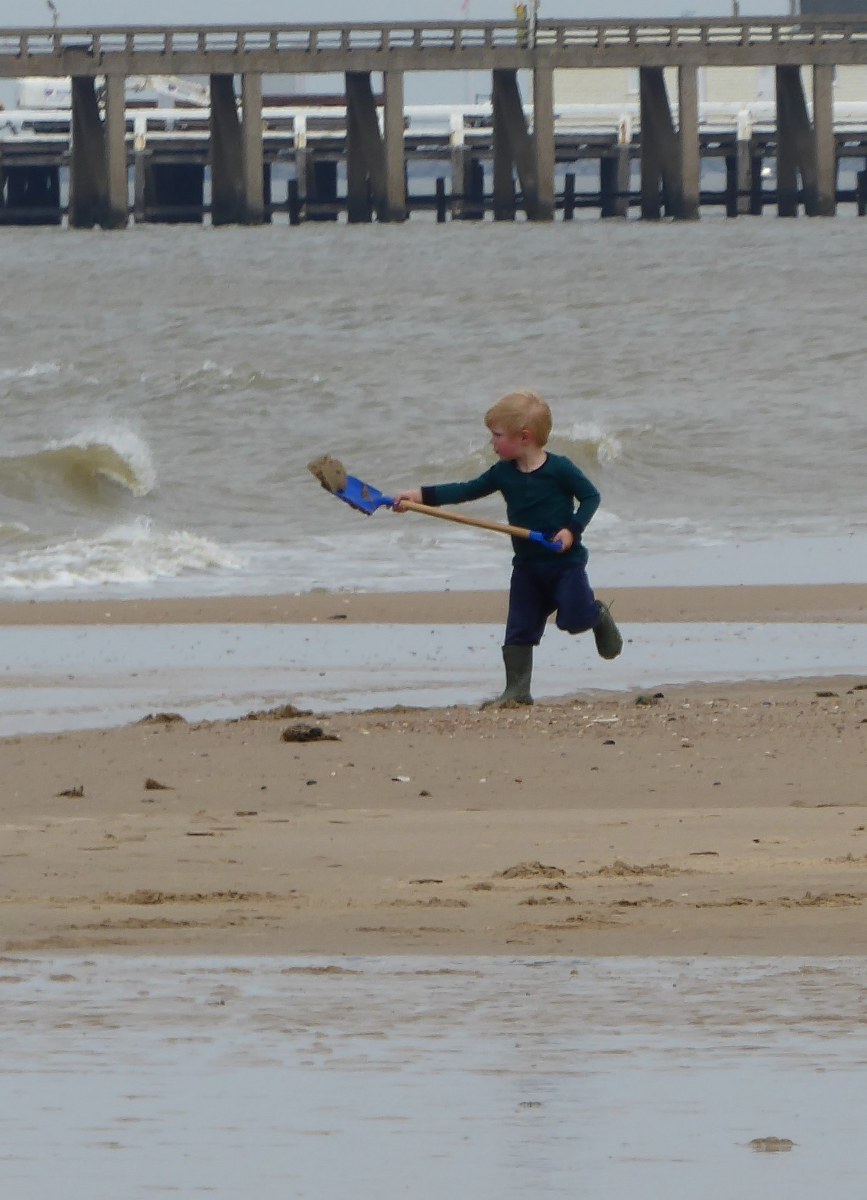 Anyone considering walking the Belgian coast should remember that it’s not the Côte d’Azur or the Algarve. But it still has its attractions.

I’ll be honest. Some coastal towns along the Belgian coast appear to have been designed on the back of an envelope in the bar after a Blind Architects’ Conference. Others seem to be governed by a Mayor with shares in a cement factory. Thankfully however, there are places along the Belgian coast that qualify as quaint, stylish and interesting. But you have to look for them.

Anyway, a couple of Saturdays ago, I felt the need to walk along the coast. I’d had my head glued to a computer screen all week, and fancied some sea air to clear my fuzzed brain and blow away the massed ranks of Calibri font 11 in front of my eyes. I thought a day walking along the Belgian coast would be just perfect. It was.

I decided to walk from Oostende to Blankenberge. Why? For the simple reason of logistics. I could take a train to Oostende, and catch one back from Blankenberge. Which is how I found myself getting off the train at 9.30 one Saturday morning in Oostende railway station.

To follow my planned route, I needed to turn left after exiting the railway station. Instead, I turned right. There was something I couldn’t resist.

Sea fish have always had a fascination for me since childhood. It’s probably because I grew up in England as far from the coast as I could possibly be; the official Centre of England was just a short march down the local Roman road. And where I live in Belgium isn’t convenient for a quick trip to the seaside either.

So how could I resist this sight?

The sight of a row of kiosks selling fresh sea fish, the sign that enticingly pointed to the Fish Market, and a very salty, fishy smell on the air, made me take a slight diversion.

As you can see, there’s plenty to keep a landlubber like me intrigued for half an hour. Forgive me if I have incorrectly captioned the photos; your knowledge of seafish might be better than mine.

After that, it was time to get back on track, and walk through the outskirts of Oostende, cross over the Oostende-Bruges canal, and reach the sea close to the Napoleon Fort.

If you are thinking of following my footsteps … DON’T!

The outskirts of Oostende were unimaginably dreary (the Blind Architects had been busy again!), roadworks disrupted my intended course, and I found myself trudging along a main road, alongside a bus depot and tram maintenance centre, through industrial wasteland and then a tedious residential estate on the outskirts of Bredene.

Here, many of the street names were named after birds: curlew, snipe, heron, swan, kestrel, lapwing, cormorant. All of them were birds that would have been present in this area BEFORE the houses were built, but which are definitely not present now. So I guess the street name signs were more like roadside memorial signs. (You can see I wasn’t in the happiest of moods at this point!)

So to keep your happy mood, what I would advise is to catch the Coastal Tram from outside Oostende railway station, direction Knokke, and get off at Oostende Duin en Zee (just two steps down the line but an eternity if you are walking it). From there, head down Vuurtorenweg and before you know it you’ll be on the beach.

IMPORTANT NOTE: Read Guido’s comment below (the one from 10 February 2020) where he mentions the ferry that will take you across the harbour and straight to the beach on the other side, and avoid this dreary walk mentioned above!

The BEACH. Not the PROM!

Get down to the water’s edge and turn right, and walk. And that’s what I did for the next five hours.

Despite it being a dry and warm Saturday in May, the beach was fairly deserted.

Oh I do like to be beside the seaside

Around the resorts there were a few more people, but generally there was only a scattering of people doing beachy kinds of things: jogging, cycling, fishing, walking dogs, digging in the sand, flying kites, and various activities involving water.

Thankfully there is one town on this stretch of the Belgian coast that need not be reported to the Style Police: De Haan. It has refused to fill its skyline with apartments, which means its many Belle Ã‰poque (late 19th century to early 20th century) buildings are visible, and very charming too. Its claim to fame is that Albert Einstein lived here for six months in 1933.

After De Haan it was another pleasant walk along a mostly deserted beach to Blankenberge, where the Blind Architects had been busy again.

The inland harbour of Blankenberge was interesting to visit though.

In Blankenberge I caught the train home.

So that was my walk along the Belgian coast. Relaxing and refreshing. Six hours of staring at the distant horizon certainly gave my eyes and head a good rest.

As you can see, it was rather a dull day, so I didn’t get a suntan. But it did the trick.

Here’s the route I took if you want to follow it. It’s about 25 km, but you can easily shorten it and use the Coastal Tram. As I said earlier, you’re advised to miss the first couple of kms and take the tram to a Oostende Duin en Zee which is a better starting place. If you’re in the car you can just drive to Oostende Duin en Zee, park the car, do the walk, and then take the Coastal Tram back at the end of the day.

If you want to read another account of hiking along the Flemish coast, read Wandering David’s excellent blog post here. It covers a 42 km hike over three days with his two sons.

36 thoughts on “Walking the Belgian coast”