Women and horses in the First World War 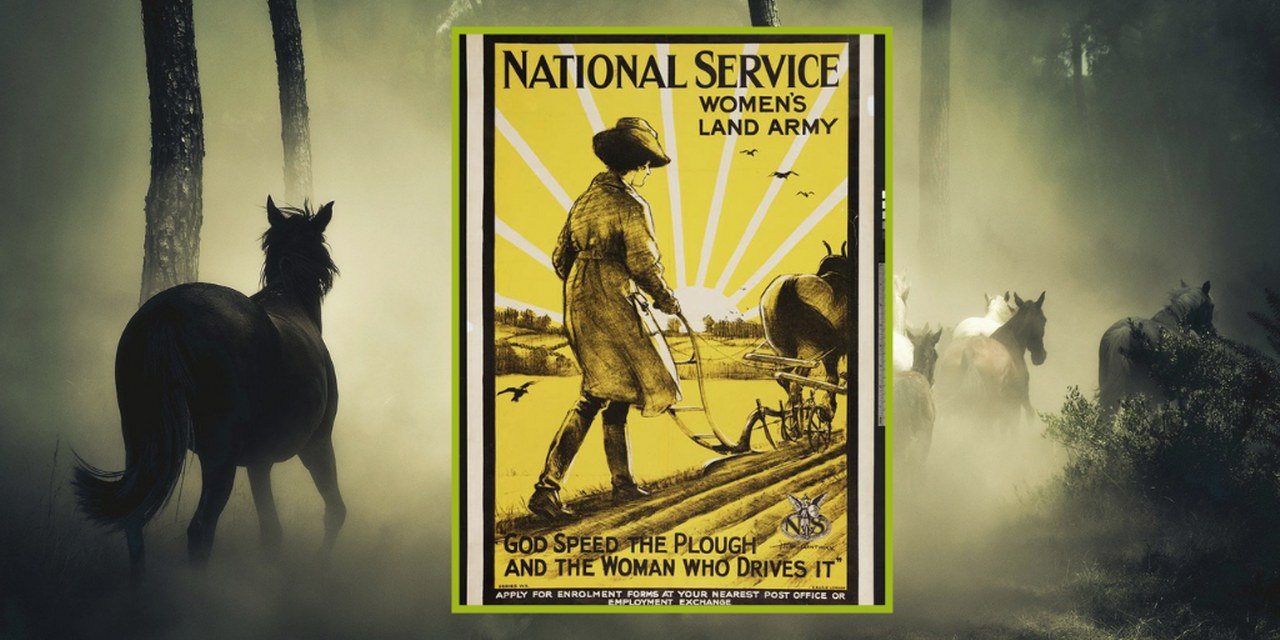 I am delighted to publish this guest post on the topic of “Women and Horses in the First World War” by Lucy Betteridge-Dyson.

Lucy Betteridge-Dyson is a military historian and MA student (History of Britain and the First World War) at the University of Wolverhampton. She has a particular interest in the First World War along with the South-East Asian theatre of the Second World War, notably the Third Arakan Campaign. In 2019 she founded Herstory Club which aims to connect women with a passion for history on both a social and professional level.

A battlefield guide and horse lover, her current research focuses on the use of equines in 20th century warfare and the story of the real war horse in the First World War. An enthusiastic public speaker, she is passionate about engaging a wider audience with the history of the First and Second World Wars, having worked with the BBC, Commonwealth War Graves Commission and Royal British Legion.

Women and horses in the First World War

Over recent years, the contribution of women in the First World War has received more scholarly and public attention than ever before. The militarisation of society in the early 20th century was deeply entwined with masculinity, and the role of women during this period is often misrepresented. The notion that ‘women didn’t work’ before the war for example, is in my view misleading; women absolutely did work, they just did so in lower paid or unpaid roles that society deemed of less value than those worked by men (this still holds truth today). The First World War did not represent a sudden opportunity for women to jump into the workplace – they were already there – but it did begin a shift in society in the perceived value of that work.

When war broke out in 1914 there was a sharp rise in unemployment in traditional women’s trades due to the disruption in day-to-day life on the home front and rise in prices of daily necessities. This continued into 1915, and it wasn’t until the middle of the year when women’s employment levels returned to their pre-war level. A Central Committee on Women’s Employment was formed and throughout 1915 and 1916 many new uniformed women’s organisations were formed; from the Women’s Emergency Corps, the Women’s Defence Relief Corps, to the The Volunteer Reserve and even the Almeric Paget Military Massage Corps. Women from all walks of life took up roles in all aspects of industry to assist the war effort. The Women’s Police Volunteers established by Nina Boyle and the Volunteer Motor Mobilisation Corps, along with the expansion of the First Aid Nursing Yeomanry saw particular success. The work of women in nursing and munitions industry during the war has been well covered, but the Women’s Land Army (WLA) has received less attention.

Formed in 1917 by Meriel Talbot, the WLA focused on the recruitment and training of young women into the agricultural industry. Thousands of men working on farms had gone to war and as a result, farms were struggling to function and food production was suffering greatly.  Recruitment posters and rallies urged women to sign up and to answer their country’s ‘urgent need!’

After an interview to confirm a base level of fitness and ‘a good constitution’, recruits could choose between working in either agricultural, forage or timber-cutting sections. The forage section was an expansion of The Forage Corps (established in 1915), which provided food for the army’s remounts. It had a minimum term of one-year service whilst agriculture and timber were 6-month terms. Women with previous experience went straight into work on the land, whilst inexperienced recruits were sent to ‘training farms’ for 4-6 weeks to learn the ropes. By 1917, over 8,000 women were working in the forage section, attending to matters pertaining to horse transport and feeding. With the British Army heavily reliant on horsepower throughout the war, this was essential work.

The Women’s Forage Corps fell under the control of the Army Service Corps and was led by Mrs Atholl Stewart as ‘Superintendent of Women’. Women worked in teams of 6, making hay and baling it, repairing sacks and tarpaulin and carrying out general stable work to ensure the horses were well fed and cared for. Some of the women who were from middle-upper class backgrounds, and had previous equestrian experience, landed roles at the smaller depots such as those at Russley Park in the south-west of England, which became known as the Ladies Remount Depot.

Run by Lady Mabel Birkbeck, the wife of Major General Sir William Henry Birkbeck (the Director of Remount services from 1912 to 1920), Russley was a convalescence depot with a capacity for around 100 horses, mostly Officer’s chargers. These were fine horses who had been wounded or became unwell at the front, and their time at Russley was spent in rehabilitation to prepare them for a return to service. Women working at Russley were specifically chosen based on their knowledge of horses and would meet the animals’ every need until they were fit enough to be returned to their units. From the 6th January 1916 the depot received 365 horses and issued 308.

Horses on the front lineS

The role these depots played in facilitating the recovery of animals back into active service was essential. When war broke out the British army possessed 25,000 horses but by the end of the war British army equines across all theatres would top 800,000. They were vital to the army’s day-to-day operation from supplying ammunition to the front lines, food to troops, or hauling artillery and transporting the wounded – the hoof could far better cope with crossing the battered terrain of France and Flanders than the combustion engine!

The value of these animals reflected their necessity in waging war successfully. With good access to the international horse market, the British Government spent approximately £67.5 million on horses and mules throughout the war and made it a priority to ensure that they were well cared for and returned to service where possible. The British Army had over 70 veterinary hospitals across the Western Front, treating some 2.5 million horses of which 2 million were returned to duty. The success of the Army Veterinary Corps was reflected in the low average mortality rate for horses in the British Army of just 14%, which was a vast improvement on previous figures from the Boer War.

Nevertheless, many animals perished during the conflict. 1917 on the Western Front proved to be the most dangerous time and place to be a horse in the First World War (excluding the East African Campaign which presented unique challenges) with over a quarter of animals seeing service killed or missing.

The work of the Women’s Forage Corps represents an intersection between these two lesser told stories and perspectives of the Great War, those of women and the horses that enabled men to fight as they did. Historians will continue to unearth these tales and add to recorded history to ensure that we remember not just the men who fought, but everyone who played a part in the first of the 20th century’s global conflicts.

Thanks Lucy for this interesting article!

Lucy has an outstanding website – Oh, What A Ladylike War – that is well worth a visit. It’s packed with interesting articles. You could really spend a few hours there. Some topics that caught my interest include:

In addition, Lucy has been on BBC TV. She was the battlefield historian who helped comedian and author David Walliams to discover more about his paternal great-grandfather’s prolonged and traumatic experiences during the Battle of Passchendaele. The episode is on BBC iPlayer but that’s only viewable if you are in the UK. Elsewhere you’ll have to navigate through the advertisements and watch it on Daily Motion. (You might need to exercise some patience when the ads appear). The whole episode is fascinating but Lucy’s bit starts from around 14 minutes in. You can also catch up with Lucy on Twitter.

13 thoughts on “Women and horses in the First World War”