What is the Best Beer Bar in the World? 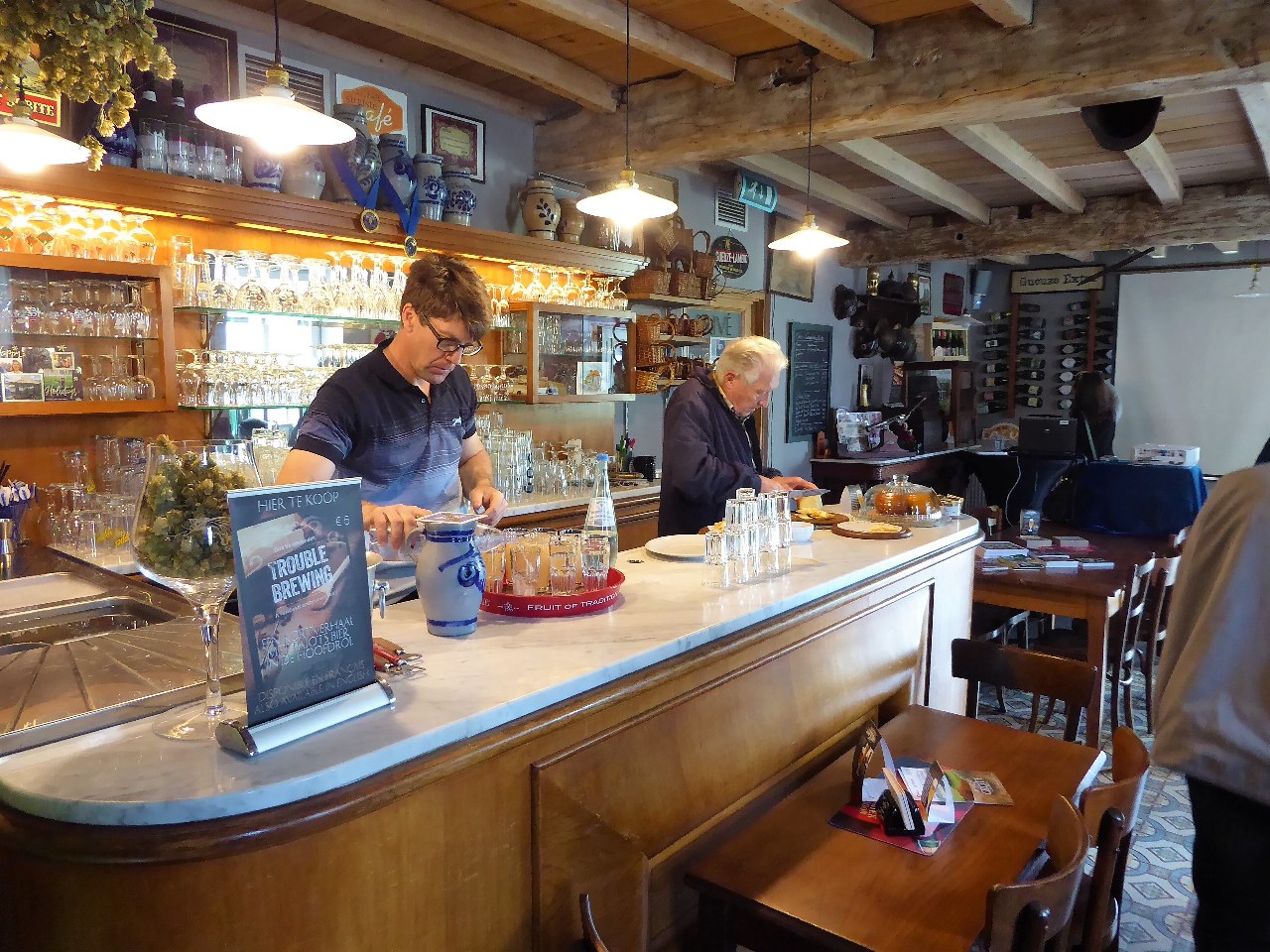 When I was invited to a press event in the Best Beer Bar in the World, I couldn’t resist.

To be fair, I would have attended the press event wherever it was held. But I was certainly curious to discover what’s so special about this particular beer bar. In fact, I went with great expectations. The accolade for the Best Beer Bar in the World goes to “In de Verzekering tegen de Grote Dorst.” This is a tiny bar in the small Flemish village of Eizeringen, near Lennik, to the east of Brussels. The name of the bar can be translated as “Insurance against a Great Thirst.”

Who pronounced this as the best?

The website RateBeer.com based on reviews of its readers. RateBeer claims that they are “the most in-depth, accurate, and one of the most-visited source for beer information.” The site’s database contains millions of reviews from users all over the world, covering more than 470,000 beers from more than 26,000 brewers. 140 beer-lovers voted for this place. Yes, I agree, 140 seems rather a low number, considering the site has millions of reviews. It’s also appreciably lower than the 425 people who reviewed the Kulminator in Antwerp (in 7th position), and the 487 people who reviewed the Moeder Lambic Fontainas in Brussels (in 22nd position).

What are the criteria?

For a beer bar to be voted the Best Beer Bar in the World it has to score highly on Ambiance, Service, Selection, Food and Value. It’s interesting to see where the Grote Dorst scores highly.

Selection. This is the main draw of this place. As one reviewer puts it: “If you’re looking for Gueuze or Lambic, this is THE place to go to. They have (possibly) the largest selection in the world of these beers, and even stocks from breweries/blenders that have been closed for years now. We’re talking real vintage stuff here. Only very few beer bars have Lambic on tap (if they serve it at all!), but here you’ll find it.”

Ah, so this is why it’s rated so highly. It’s because RateBeer’s readers and reviewers love their Gueuze and Lambic beers. If you’re wondering what on earth is Gueuze or Lambic beer, read this.

This means that if you are not a connoisseur of Geueze or Lambic beers, then you might have a problem. Another reviewer: “Forget this place if you don’t like Lambic.”

Service. It’s highly rated at the Grote Dorst, with many reviewers saying “They know how to serve a beer properly.” (But isn’t this Lesson Number 1 when training someone to work behind a bar?). The fact that the Lambic was “served in Lambic baskets and proper glassware” scored big points.

Food. Most reviewers labelled this category as N/A (Not Applicable). This is because, well, they don’t serve food. A typical review: “Food is non-existent except for a bag of crisps and a dry sausage.” One reviewer was lucky: he got some cheese.

Ambiance. This too scored highly. Many reviewers described the ambiance as warm, friendly, farmhouse-style, old-world, unchanged for centuries, cosy, rustic, jovial, charming and quiet. Spare a thought though for the reviewer who took his wife, because she “basically hated everything about the visit and walked down the hill to a café to wait for me.”

The Grote Dorst is open from 10 a.m. to 8 p.m. But it’s only open on Sundays. Yes, it’s closed from Monday to Saturday. One reviewer rather cuttingly suggested that this is why they have such a good stock of rare beers. “… this bar is open a few hours a week. Which makes it ‘easier’ to hold good bottles, cause if nobody can buy them, they can continue to have ‘em on the menu …”. Actually, what I’ve said above isn’t strictly true. It’s also open on bank holidays, and when there is a funeral service at St. Ursula’s Church. The café can also be rented for private parties and gatherings.

A reviewer: “They don’t take credit cards, so if you want to go for big ones bring cash enough.”

It’s also difficult to get to: “It’s in the middle of nowhere,” said one reviewer. Another said “impossible to reach by public transport.” (Not quite true, but it is difficult).

Also, it’s small, so be prepared for a tight squeeze. How small? Well, two football teams could just about squeeze in for a post-match drink. But the referee and supporters would have to wait outside.

I found the Grote Dorst rather underwhelming. However, I’m not a beer geek. So I’m not interested in old Lambics or rare Geuzes. If you are a beer geek, then you will undoubtedly have to visit this place, and will surely love it.

But if I was looking for a cosy place to have a normal Belgian beer and maybe a bar meal with a couple of friends on a weekday lunchtime or Saturday evening, there are hundreds of bars in Belgium that I would rank  higher than “In de Verzekering tegen de Grote Dorst.” Having said that, it’s worth visiting one Sunday afternoon. Even if it’s just to say that you have visited the world’s best beer bar!

If you want to read all about Lambic beer, the classic reference book is now available as an eBook. After studying this unusual, fruity beer style extensively in Belgium, Jean-Xavier Guinard presents his findings with detail and historical intrigue.

Discover the importance of sugar, top-fermenting yeasts and Belgian hops to the success of these intricate, traditional ales. Learn about the history of Belgian beer and then try your hand at brewing an Oud Bruin, Trippel, or a Grand Cru.

Brew Like a Monk delves into monastic brewing, detailing this rich-flavored region of the beer world. It also examines methods for brewing these unique ales suited to commercial and amateur brewers.

The beer team of the Flemish Institute for Biotechnology went into the lab for 2 years to subject 250 Belgian beers to thorough chemical analysis and to a panel of objective guinea pigs. Get to know which flavor you prefer and search for similar varieties among the huge range of Belgian beers.

Drop your email below to receive all new Discovering Belgium posts in your inbox.

35 thoughts on “What is the Best Beer Bar in the World?”