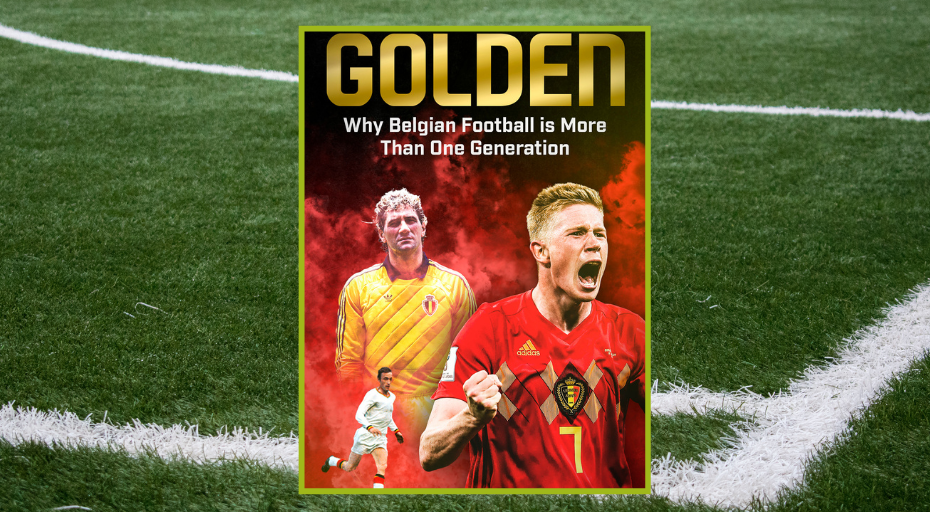 “Golden: Why Belgian Football is More Than One Generation” by James Kelly is an excellent account of football in Belgium.

One of the interesting aspects of moving to live in another country is getting to know your new home’s sporting heritage. As a football supporter, I was already aware of stars from the 70s and 80s such as Van Himst, Rensenbrink, and Van Moer. After moving to Belgium in 1987 I followed the national team in the 1990 World Cup, and shared with the country’s grief when losing to England through that last-minute David Platt goal.

But that seemed to be the catalyst of things going downhill. The team became rather mediocre, and at times much worse. Would it ever improve? Well, just as it plummeted to an all-time low of 71st in the FIFA world rankings (below Burkina Faso and Uzbekistan), new faces began to appear on the scene. Matches began to be drawn instead of lost; won instead of drawn.

Suddenly, Belgian footballers began to appear in – and dominate – the English Premier League and other European leagues. Somehow, this little nation had managed to produce the most vibrant young players in the world. Fellaini, Kompany, Dembélé, Vermaelen, Vertonghen, Hazard, Lukaku, De Bruyne, Witsel, Kompany, Courtois … I could name a dozen or so more. Inevitably, they become known as Belgium’s “golden generation”. By 2015, Belgium was ranked the world’s number one team. (Mind you, they still haven’t actually won a major trophy!).

“Golden: Why Belgian Football is More Than One Generation” is an extensive story of football in Belgium. It relives previous golden eras and the European glories of Belgian clubs. It gives fascinating insights into the main characters in Belgian football over the decades, and isn’t afraid to bring up less attractive sides such as match-fixing scandals and the Heysel disaster. And it seeks to understand how such a bright crop of talented Belgian youngsters was unearthed and fostered to become the stars they are today.

In short, it’s an important and highly readable book that any football fan will enjoy reading. My only quibble is that it fails to make any mention at all of Belgian women playing the game. Considering that the women’s national football team played its first international back in May 1976, and reached the quarter-finals of Euro 2022, this is an unfortunate omission.

I heartily recommend “Golden” by James Kelly. In fact I enjoyed it so much that I made a Belgian Football Quiz based on this book (and included a question on the women’s team!).

Thanks to Paul from Pitch Publishing for providing a free digital copy of Golden for review purposes.

To buy, head over to Amazon.

Disclosure: I am an Amazom Affiliate and may make a small commission from certain items from Amazon.