Langdorp: A trip down memory lane 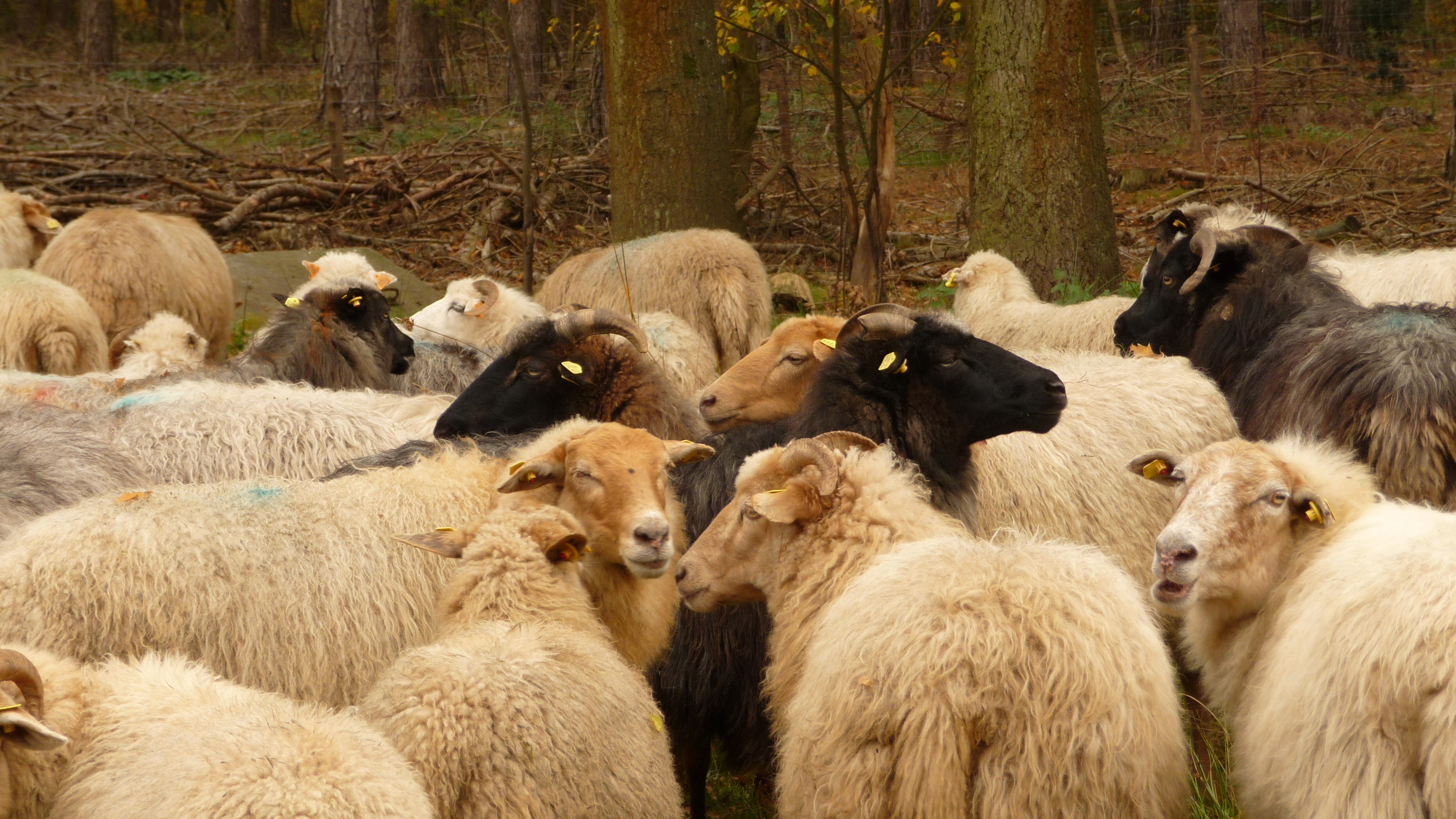 The Langdorp area (east of Aarschot, which is north-east of Leuven) is well known among Belgians for being good walking country. It’s easily accessible; the country lanes are quiet; there is a well-developed network of footpaths through forests and fields; and it has a smattering of small villages with cafÃ©s, corner shops and bakers.

But these weren’t the only reasons why I headed to Langdorp a few weeks ago. There was another, more personal reason.

I used to live here once. Over 20 years ago, Liz and I and our four very young children lived in the tiny village of Wolfsdonk for a little over three years. What we were doing there — and why we only spent three years there — are topics for another blog. But for the moment I just wanted to return to Wolfsdonk, to see what had changed since 1994. Because actually, since then, I had never returned to the place.

But that’s for later. Where to start from? A good starting place is Testelt, because it has a railway station. So if you don’t have a car, take the train to Testelt. But don’t get too excited about seeing the station: 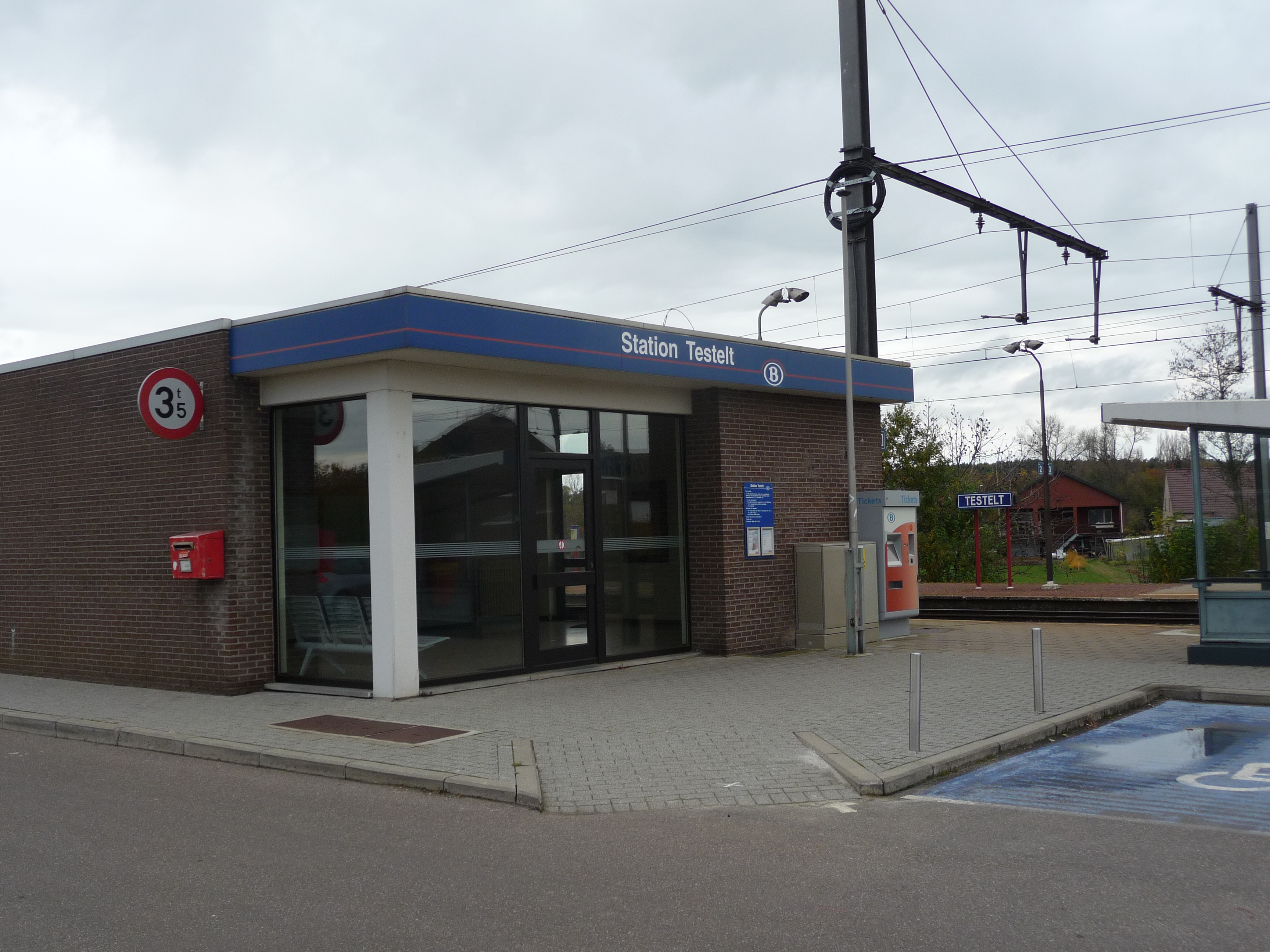 The River Demer is slightly more interesting, with the old water mill:

But on with the walk! I took a circular walk of 14 km. Here on RouteYou you can see the whole route, but if you go to this wonderful website and type in Testelt you will be able to make your own shorter (or longer!) route, following the numbered junctions.

Here are a few sights you might see along the way.

Part of the route takes you through the forest and heathland around Averbode. I’ve blogged on this area before (here) and it really is a lovely area. The forest is a mix of coniferous and deciduous.

And the heathland contains some surprising ups and downs, the occasional stretch of water, and more than a few sheep:

One of the craters was formed by a Second World War airplane that crashed in the area, and which is commemorated by a plaque:

The area is also keen on horses, with stables and paddocks everywhere, and the occasional trotting circle:

Halfway around, I entered the village of Wolfsdonk, and it was time to walk down memory lane. To be honest, very little had changed in the past 20 years.

The church was still there of course, but so was the same independent supermarket. It was good to see it hadn’t been taken over by one of the huge chains. 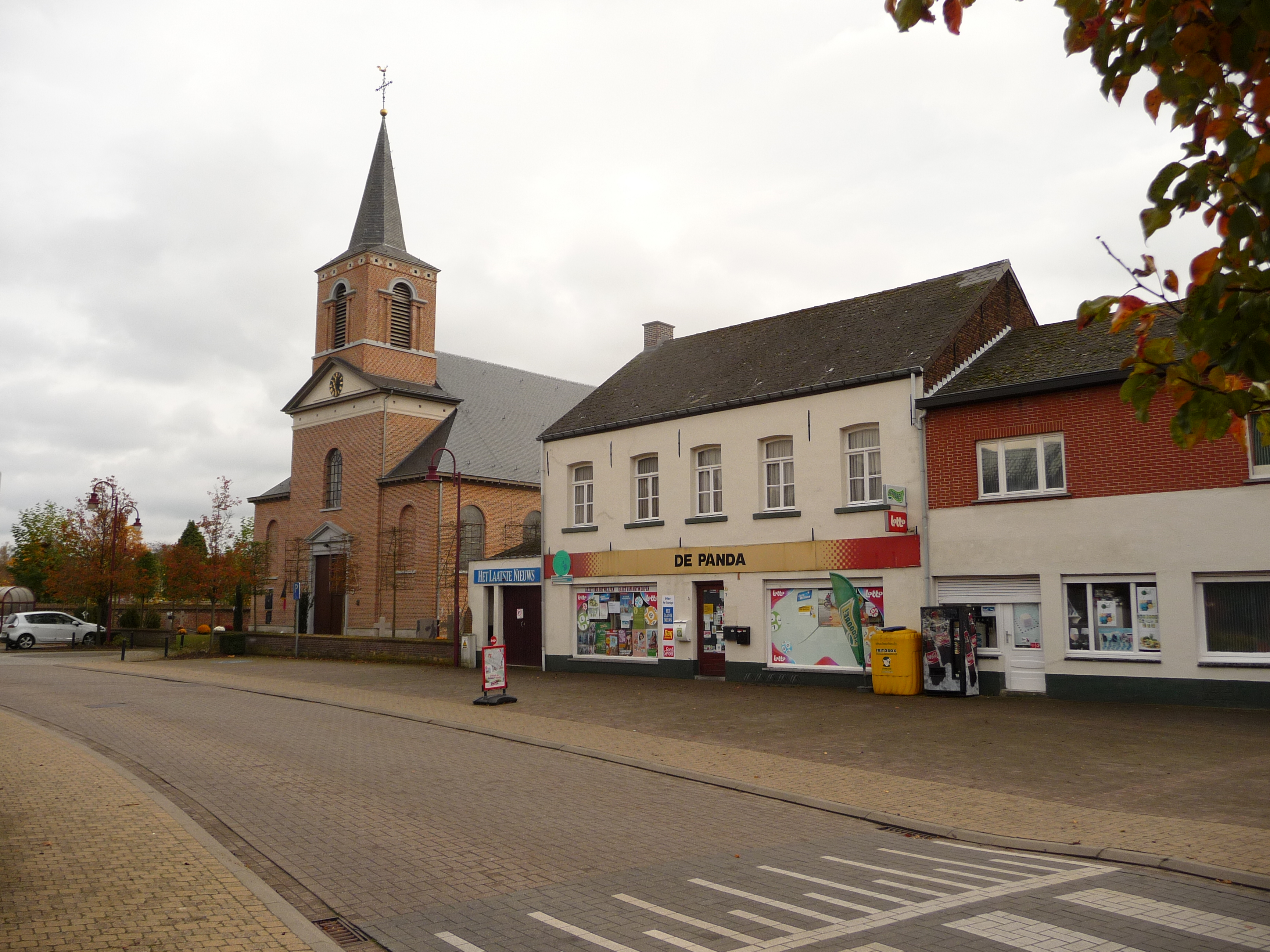 The baker’s had been renovated, but was still under the same management – and still had the same sign that must have been designed in the 60s: 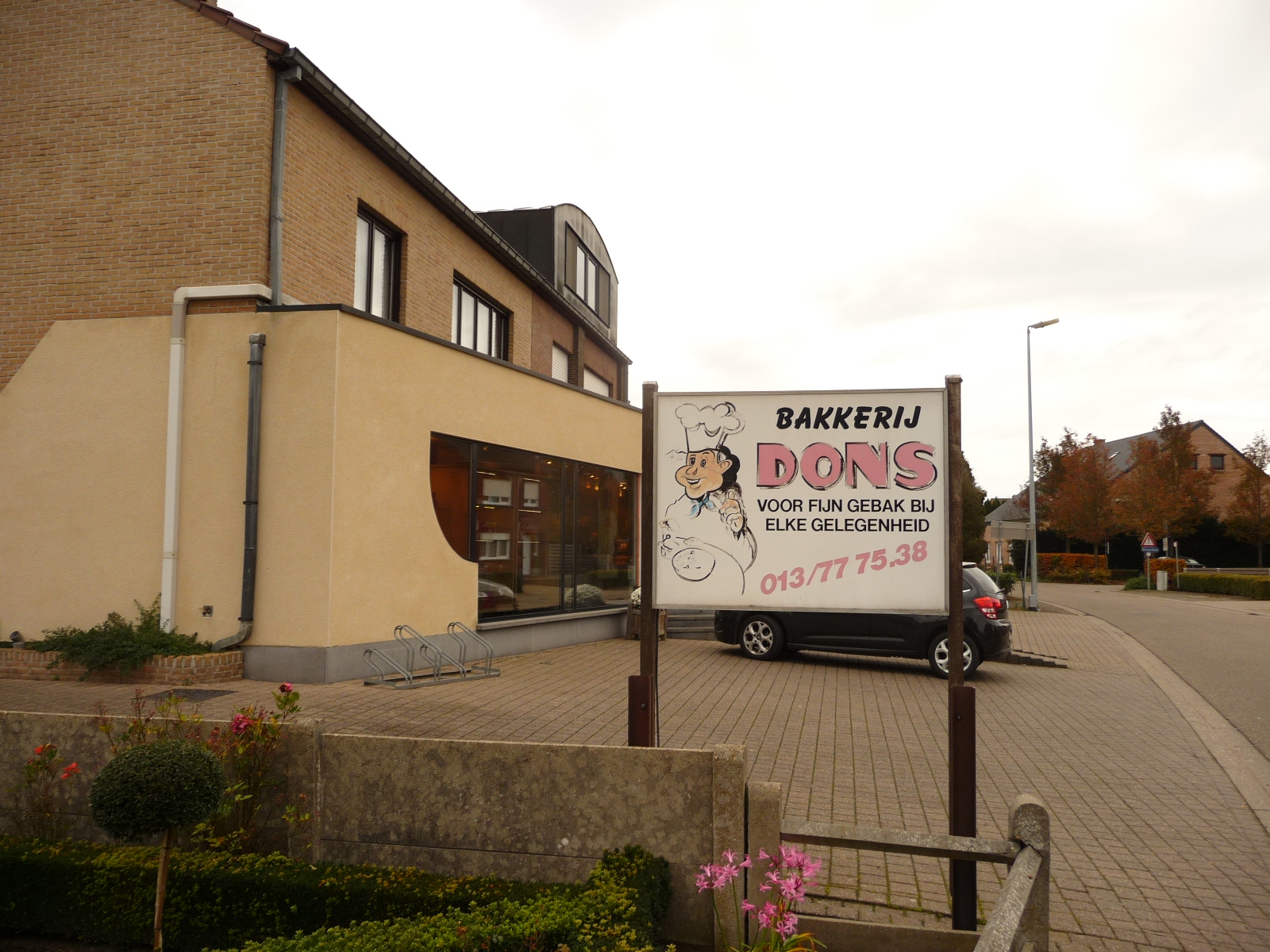 Don, as far as I can remember, used to make absolutely delicious apple tarts, crammed full of tasty fruit. I purchased one, and both Liz and I agreed that “it wasn’t like it used to be!” Had standards slipped over the years, or did I have an overly romantic view of the past?

The village cafÃ© hadn’t changed, apart from maybe a lick of paint: 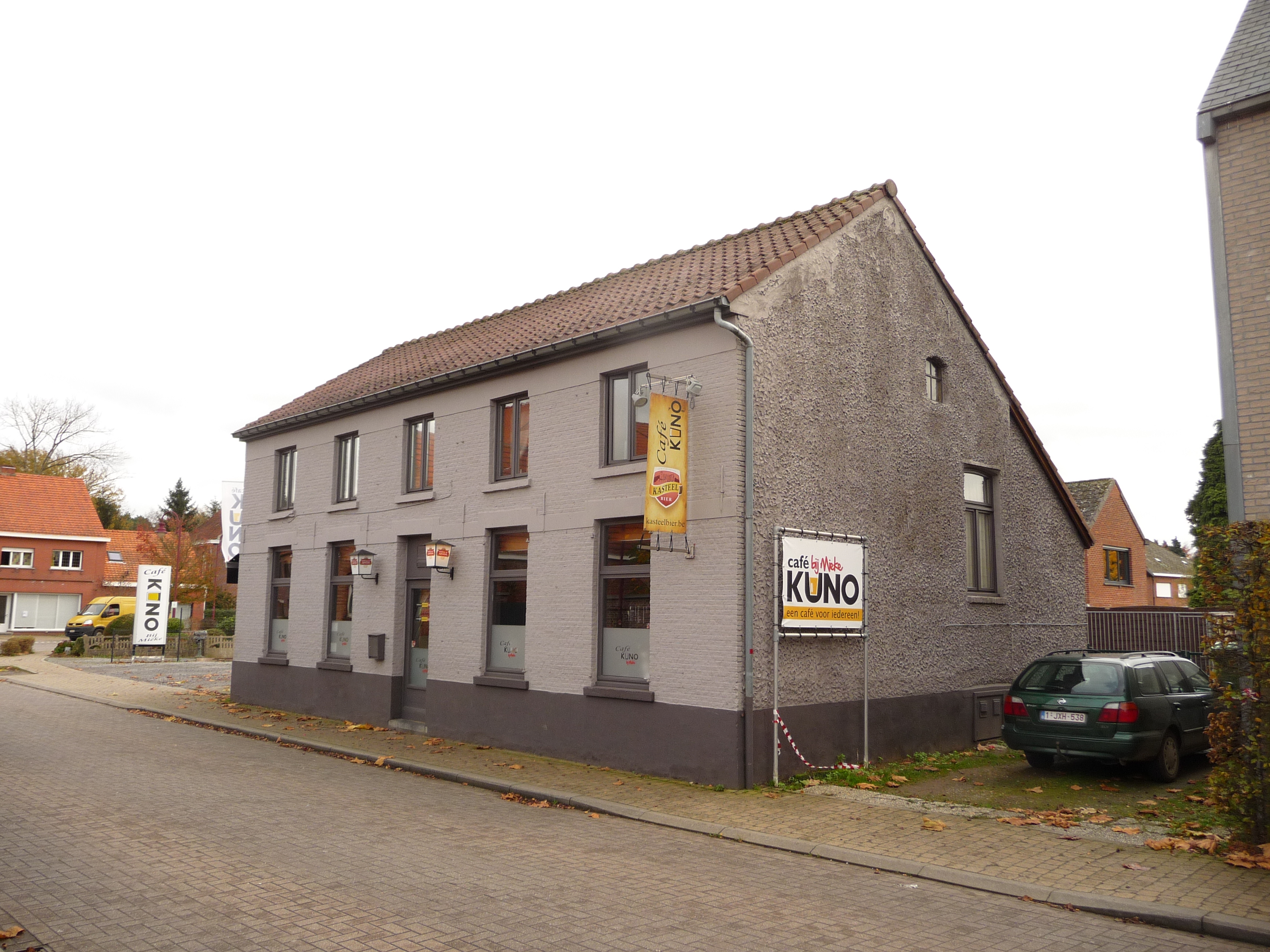 Nor had the local village school: 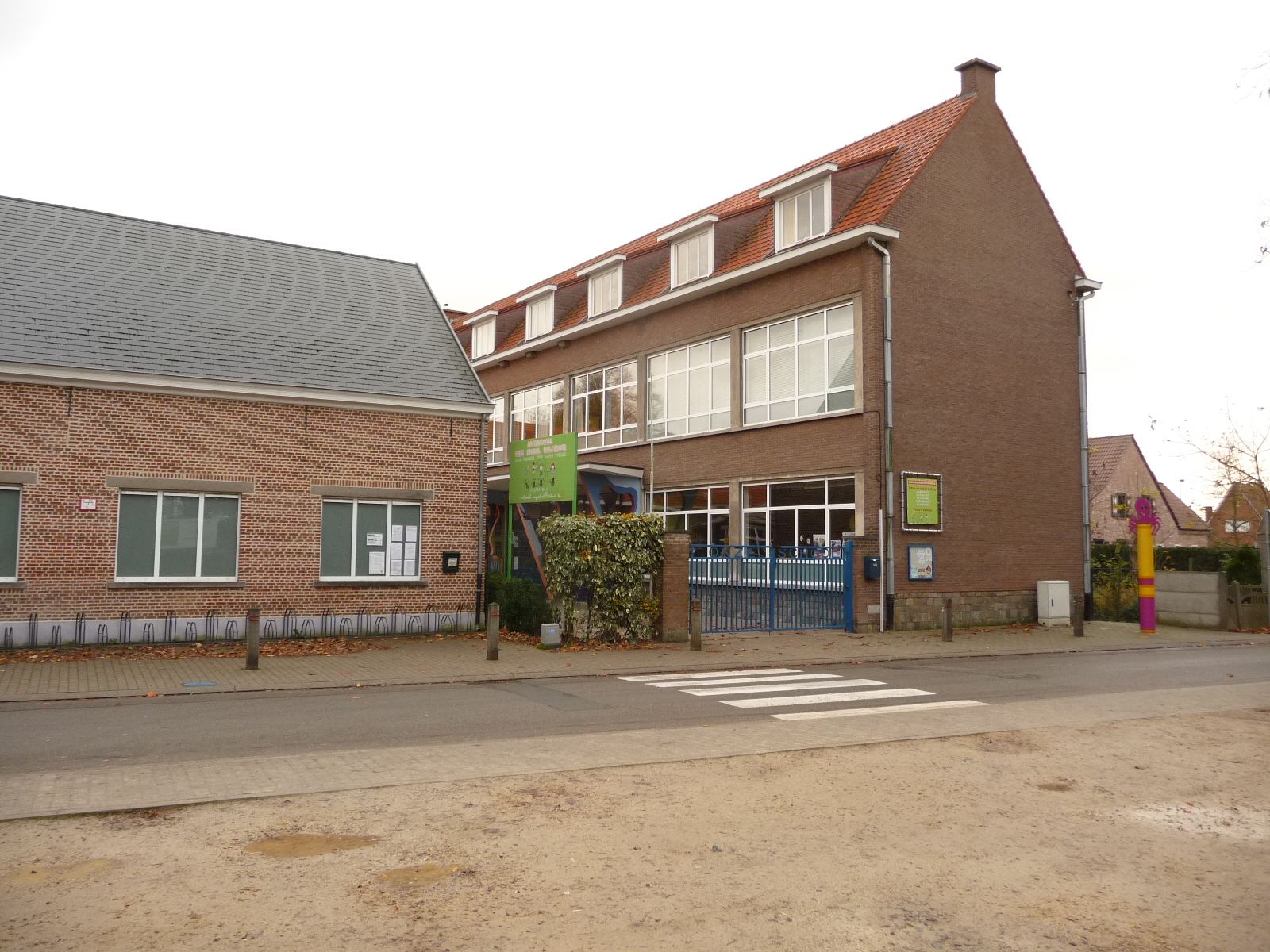 The local chippy was still operating. I can remember this place having the highest CPE value I have ever come across in Belgium (Chips Per Euro). I didn’t really fancy investigating whether this was still true though. Maybe I didn’t want to be disappointed: 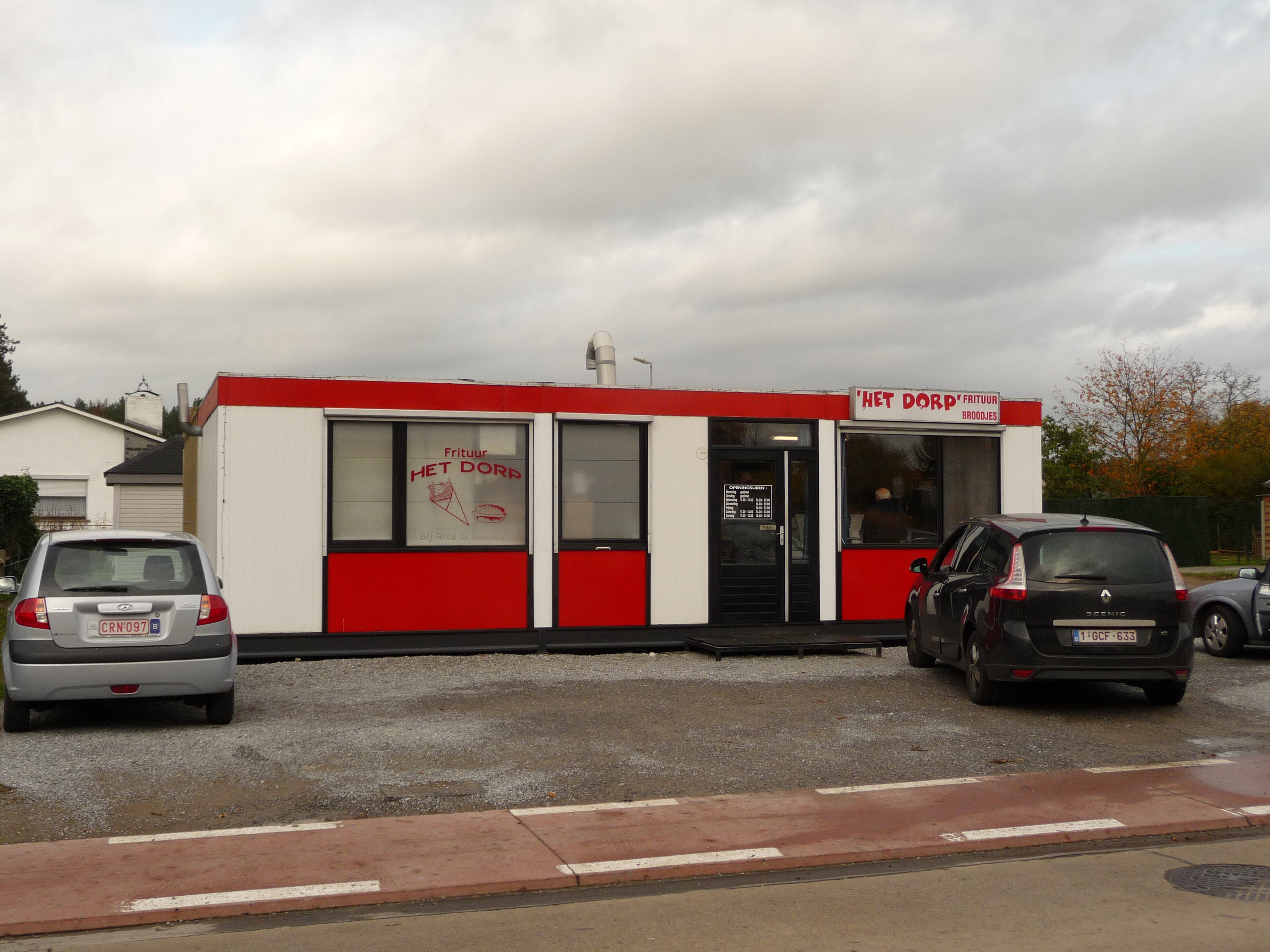 I headed down to the street we used to live in: 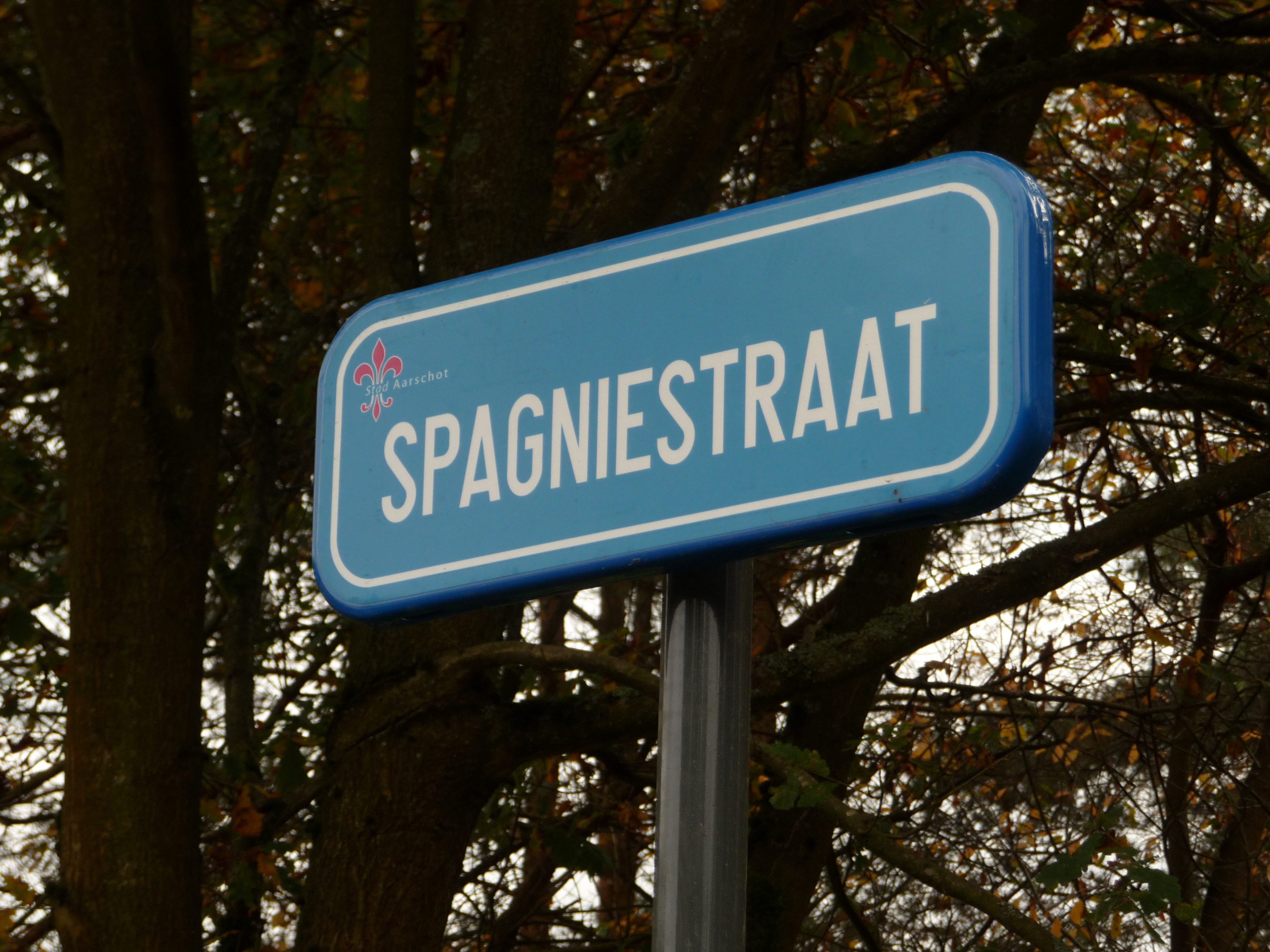 The road was still in a state of disrepair as it was 20 years ago, with the same sign providing the same warning. Some things never change: 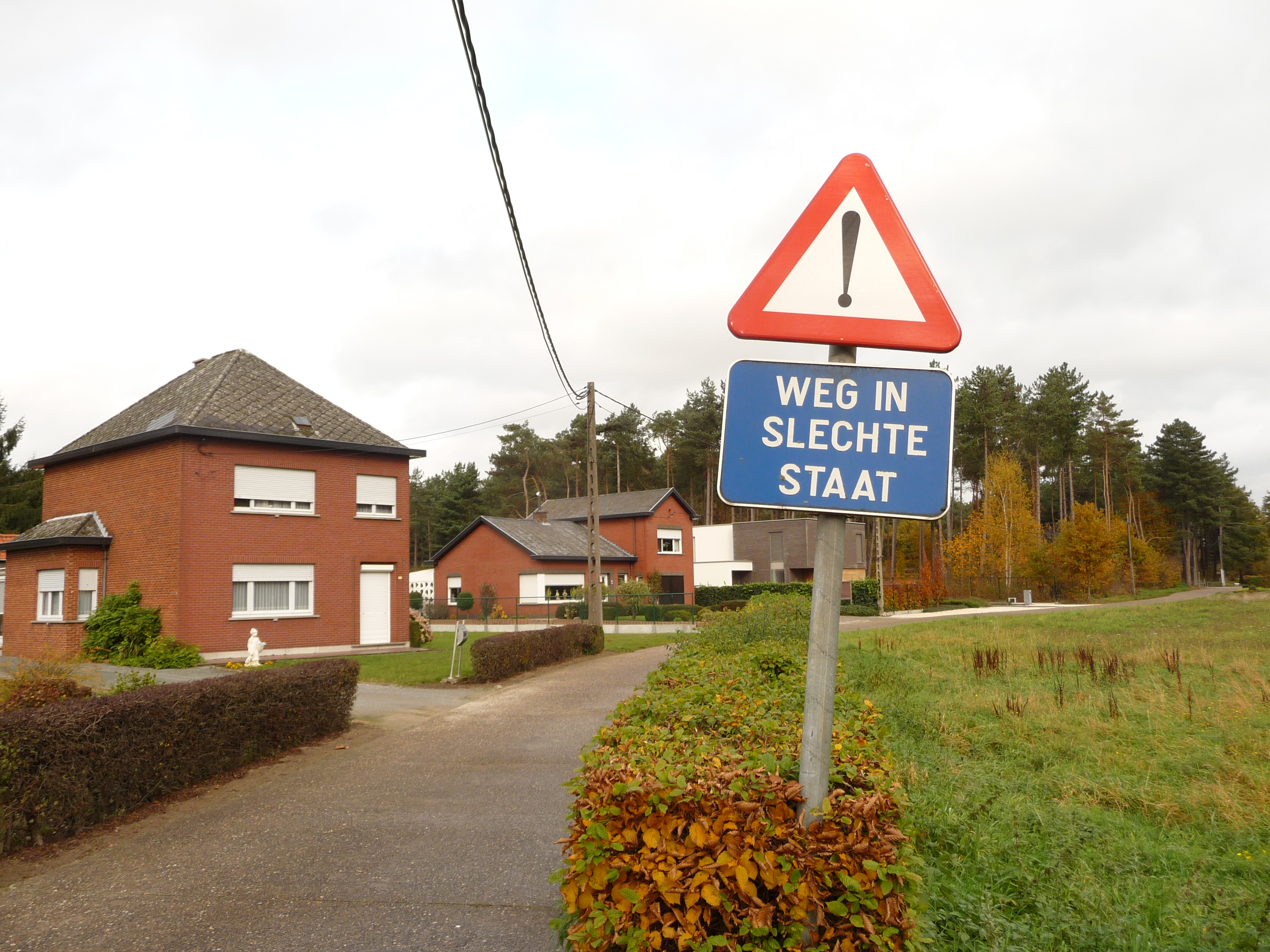 On the other hand, the chapel had definitely been renovated, with a very neat path and a smart new bench, which I guess says something about local priorities! 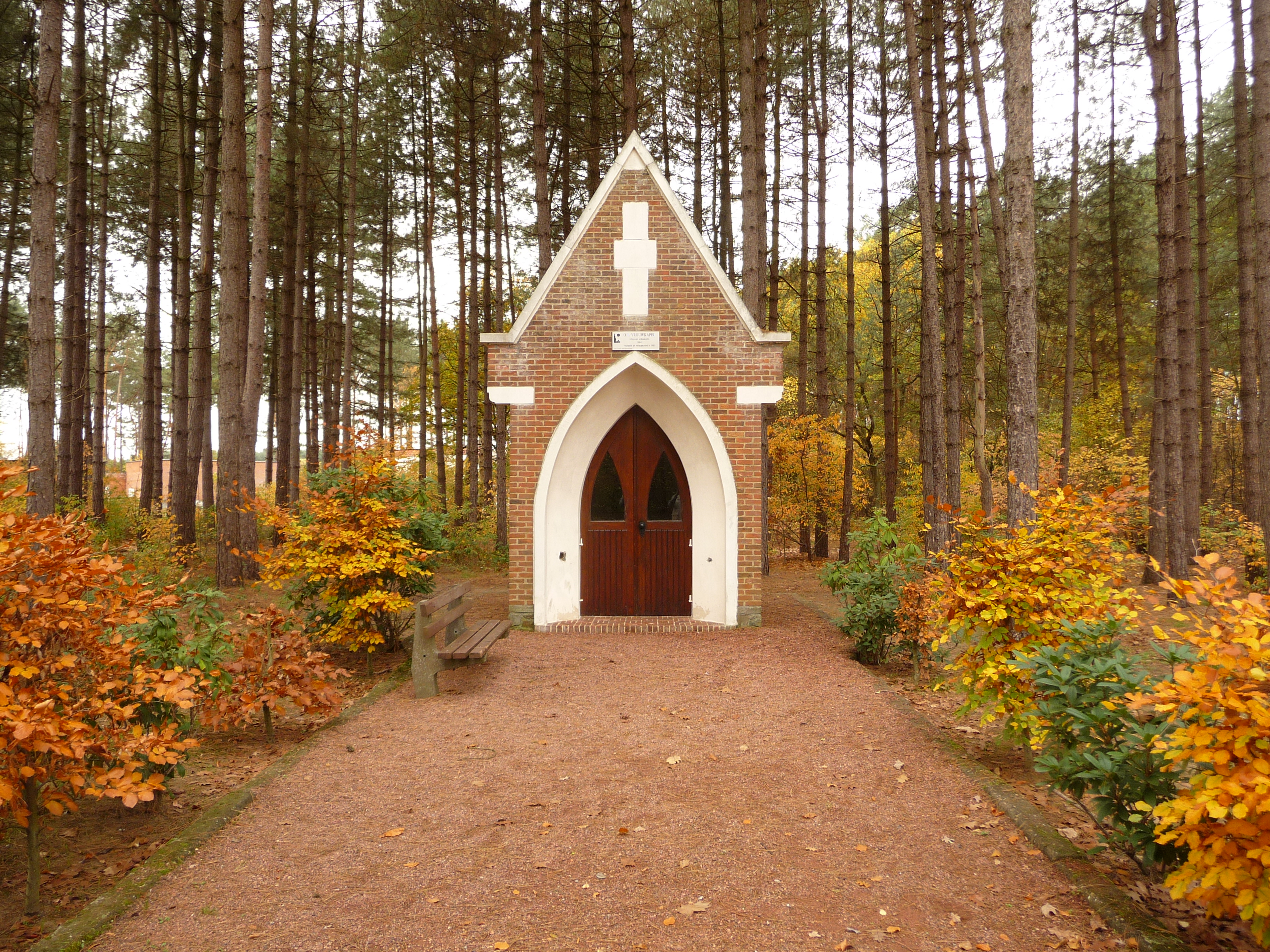 And the house we used to live in? Smaller than I remember. Well looked after. New window frames and shutters. A totally changed garden. I looked for a “Denzil Walton Lived Here” plaque but couldn’t find one.

And the memories came flooding back. The excitement of moving from Brussels into the Flemish countryside. The anticipation of becoming more integrated into Flemish village life. The gradual, disappointing realization that the villagers didn’t share the same excitement (quite the opposite!).

The fun we had with the children on the large back lawn. The frustration I felt at how long it took for me to mow it!

One of our sons rolling into the sandpit and breaking his arm. Our 3-year old daughter arriving back from school at lunchtime on the school bus – fast asleep.

Liz spending the whole of Christmas week looking after the four children on her own because I had had to be rushed into hospital.

The constant nightmare of the cellar flooding every time we had heavy rain. And as there was a problem with the septic tank, it wasn’t just rain water that filled the cellar!

The delight at seeing red squirrels and woodpeckers in the garden.

The neighbours at the back either openly decapitating live pigeons for pigeon pie, or carving up a cow in their shed and distributing joints to their neighbours (but not to us); and the struggles to prevent the children from seeing what was going on.

Ah, memories, both good and less good. I shrugged, and continued on my way.

But on a lighter note, it’s time for the DISCOVERING BELGIUM CAPTION COMPETITION.

Just enter your caption in the comments below! 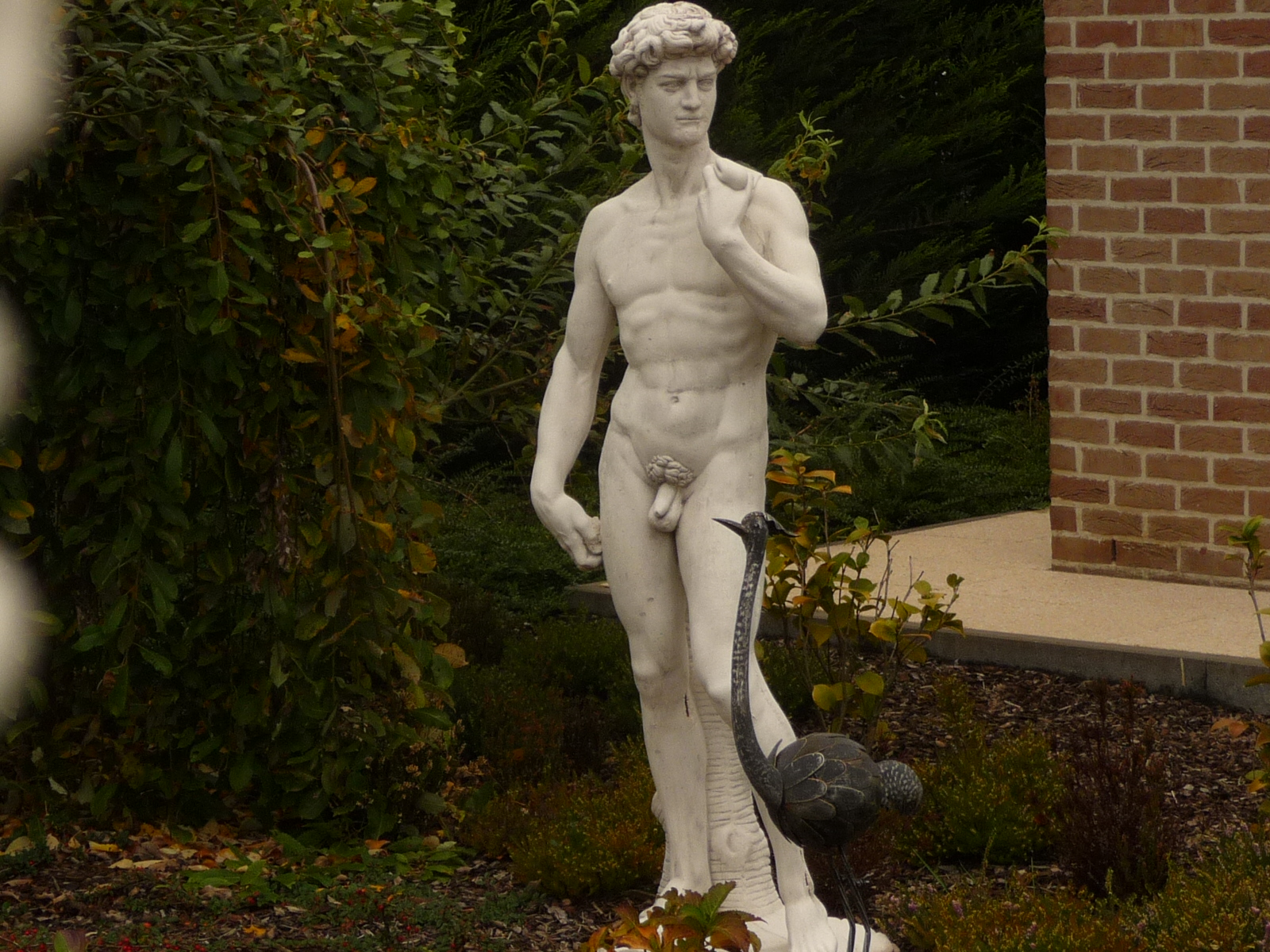 21 thoughts on “Langdorp: A trip down memory lane”