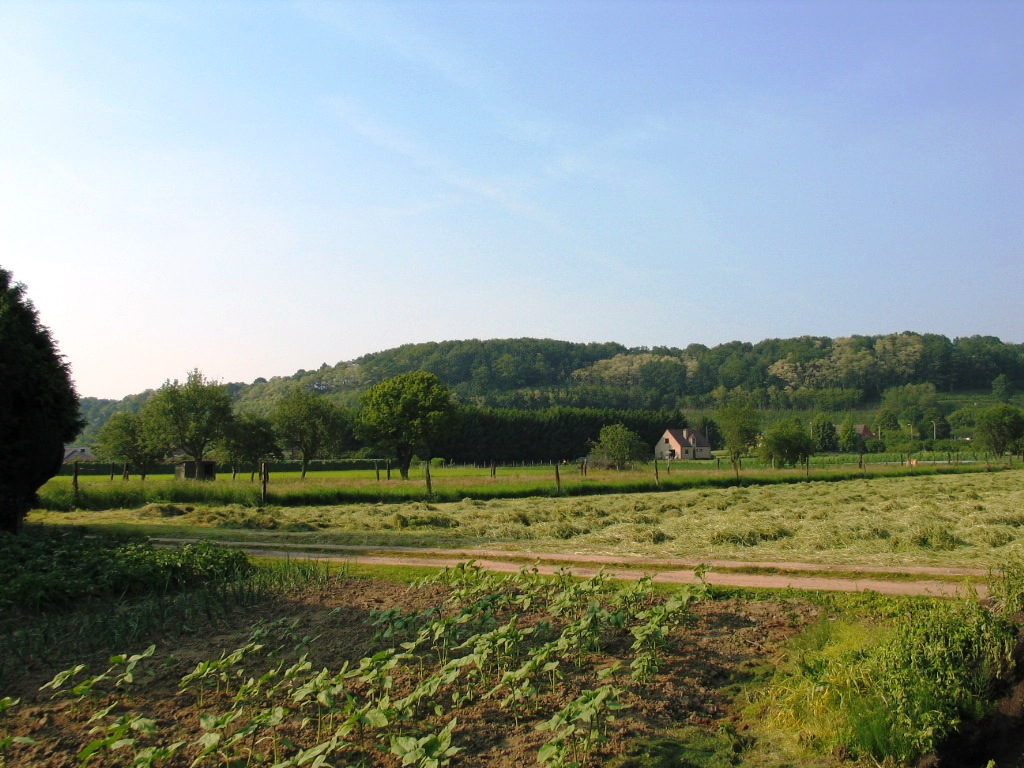 The Wijngaardberg walk in Wezemaal is a family-friendly walk with some great views.

Today, Liz and I decided to walk up the Wijngaardberg (literally: vineyard mountain) outside Wezemaal. As it’s located in Flanders, it’s not really a mountain of course, but there are some interesting climbs nevertheless and some great views over the surrounding countryside. Here’s a map of the route and you can download it and the GPX coordinates from RouteYou. Or you can follow junctions 6>62>63>65>74>64>61>6.

The whole route is 7.5 km. It’s not suitable for children’s buggies or wheelchairs, but older children will probably enjoy it. It’s a lovely walk through fields and woodland, alongside and even through vineyards and fruit orchards.

The Wijngaardberg in Wezemaal is an example of the petrified sandbanks of Hageland. Millions of years ago, sandbanks developed in the sea which flooded the whole of Lower Belgium. The flooding of the sea reached the vicinity of Diest. When the water receded it left sandbanks behind — what are known as the Hageland hills. These sandbanks contain large quantities of iron, and exposure to the air caused this iron to oxidize or to rust and petrify. The resulting iron sandstone was used for building and can still be seen in old buildings and churches. An example is the church at Wezemaal. On the Wijngaardberg you will find the remains of three abandoned quarries.

The Wijngaardberg is an excellent location for growing grapes due to its microclimate. The southern flank of the hill can be up to 5 degrees warmer than the northern flank. This gives rise to the fact that Hageland wine is the most northern wine in Europe. It means that the pinot-noir, pinot-gris and chardonnay, all varieties of wine from the Elzas, get sufficient light and warmth here.

Wezemaal is called the “wine village” and hosts the Hageland Wine Visitors’ Centre which is housed in the old town hall. Admission is free, and you can find information on the history and current wine-growing in Wezemaal. You can also taste and buy local wine there.

Walking through the vineyards and orchards of the Wijngaardberg is a great way to spend a few hours.

PLACES OF INTEREST ON THE WALK

Here are some photos of the area:

In addition, I came across this lovely video by Dieter The Photographer. On his YouTube channel Dieter has a couple of dozen short videos like this. Well worth a peruse!

Wezemaal is easy to access. It has its own railway station, although this will add 1.8 km (each way) to your walk. By car it’s just off the E314 at junction 21. You can park in the village or at the indicated starting point.

If you haven’t already subscribed to Discovering Belgium, just drop your email below.